USB-live does not save files between sessions

I created a USB-stick with Ubuntu, using the recommended tool "Startup Disk Creator" and the image for Ubuntu 13.10. The very simple interface looks like this: 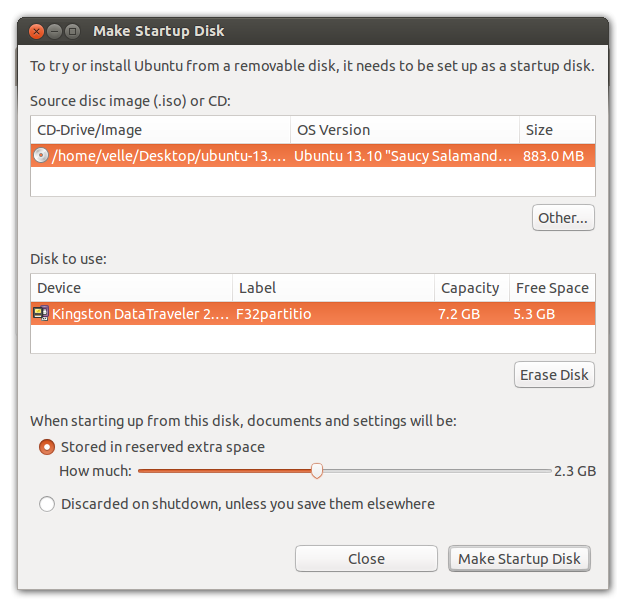 There can't be much to misunderstand in this GUI. I have chosen to create a USB stick with a live version of Ubuntu, which will save files and settings from session to session, on the USB drive, right?

Well, it just doesn't save anything. I go in, create a file on Desktop, restart and it's gone.

I did the whole procedure three times, i.e. first creating the USB, then testing if I could save.

Have I misunderstood something?

Bug 1159016 is for broken presistence on UEFI machines.

The live media has two boot mechanisms, syslinux for non-UEFI and grub for UEFI machines.

The persistence mechanism is simply a word "persistent" on the kernel boot command line, and while the syslinux boot works with persistence, the word was missed in the grub.cfg file.

You can add it yourself. Edit the grub.cfg (usbpen/boot/grub/grub.cfg) file and add persistent just before the file= on the vmlinuz lines. And yes, your desktop will be part of the things which will be saved when things are working.

ISO formats changed about 14.04, making changes as suggested above more difficult (editable FAT filesystems can no longer be used on the USB). The best current way to make a persistent USB is to use the mkusb tool from mkusb download site. The mkusb-installer should set things up for you.

Live USb is actually an installation media. It has a standart setup.

You should use it to install Ubuntu in a different USB/HDD. When you choose to try it, it always open as a fresh ubuntu from a standart setup.

At the picture I saw, You created a live (installation media) from the .iso file to the Kingston Data Traveller.

Now you should (can) use it to create Ubuntu OS with the install choice to a new usb.

Not the answer you're looking for? Browse other questions tagged persistence or ask your own question.

4
How do I create a live USB installer for UEFI/EFI systems that reads and saves persistence changes?
1
Ubuntu 16.04 LTS live USB stops working after initial software update
1
Partitioning a usb

1
Live-Ubuntu 12.04 ran fine, now stopped booting!
3
Live USB persistence
1
Live USB -add files?
0
how to transfer data between persistant live usb and computer
0
Ubuntu live usb, with persistent memory?
3
"Make Startup Utility" does not save LiveUSB changes
1
How to save files from a live usb boot to computer?
2
persistant live-USB doesn't save my wifi password
2
Would it be possible to create additional partitions (e.g. /home) on a Xubuntu 20.04 Live stick?