What precautions should I take when exposing my desktop directly to the internet?

I've always used my Ubuntu desktop behind the security of a router with NAT, but there have been a few times when I've had to plug it directly into an active cable modem.

In general, what precautions I should be taking in situations when my computer is exposed to the internet like this for extended periods of time? Specifics that immediately come to mind are:

I realize that questions like this are just the tip of the iceberg of expansive topics that entire professions are based upon, so let me make clear: What I'm looking for are a few straightforward recommendations of best practices or configuration changes that a desktop user would find useful in a default Ubuntu installation.

A standard ubuntu install should not activate network services that are accessible via the internet.

You can check via (for tcp):

Similar for udp, but udp does not distinguish between ports opened for listening or sending.

Thus, an iptables configuration is not necessary.

A bit off-topic perhaps, since following concerns you in any case (it does not matter if you are behind a router):

And, sure, you probably know that, but anyways: Always work as normal-user as possible. Don't use firefox etc. as root ...

The 127.0.0.1 entries are harmless, because those programs only listen on the local network interface.

sshd is an example of a service that listens on all available interfaces (0.0.0.0, i.e. including the one the cable internet modem is connected to) - but usually you have good passwords or disable password authentication and only use public-key.

Anyways, IIRC sshd is not installed by default.

Bind things to localhost and not *.

Both Oli and maxschlepzig have really good answers.

A firewall shouldn't be necessary for most people, because you shouldn't be running things that listen on a workstation anyway. However, it's never a bad thing to run a simple iptables setup with a default deny all policy. You just have to remember to allow connections if you ever start doing anything more creative (SSH is the first good example of this).

However, maxschlepzig also brings up another important point. It's not just what people try to do to you, but also what you do to yourself. Unsafe web browsing is probably the greatest risk to the average desktop user, with unsafe email and "thumbdrive" use being close behind.

If Firefox is your default browser, I recommend plugins such as Adblock Plus, FlashBlock, NoScript, and BetterPrivacy. Similar tools exist for Chrome as well. I include adblocking as a protection because I've seen ads on legitimate sites that were really malware loaders, so I recommend using an ad blocker unless you have a reason not to for a specific site. NoScript also helps a lot, by preventing JavaScript from running unless you allow it.

For email, the obvious recommendations to not open unknown or unexpected attached files without inspection is still a good recommendation. I'd also see what you can turn off. Some clients let you disable JavaScript in inbound HTML email, or disable the HTML part of a message entirely. Plain text may not be as pretty, but it's a lot harder to sneak in a bit of malware, too.

You're safe! Ubuntu clean install comes with no network services available to other system. So there is no risk.

Nevertheless, while using Ubuntu, you might install application that will offer services to other system on a network: e.g. files or printers sharing.

As long as you stay inside your home or work environment (which are usually both behind a router or firewall), you can consider your computer safe, especially if you keep it up-to-date with the latest security fix: See in System->Administration->Update Manager.

Only if you are directly connected to the internet or on a public WiFi (like in a coffee bar or hotel room) and if you use network services like sharing files/folders then you could be exposed. Though again, the package responsible for Windows File Sharing (named samba) is often kept up to date with security fix. So you should not worry too much.

So if you feel it's risky or if you're in a risky environment, try installing a firewall. ufw has been suggested, but it is command line, and there is a nice graphical interface to configure it directly. Look for the package named Firewall Configuration or gufw in the Ubuntu Software Centre. 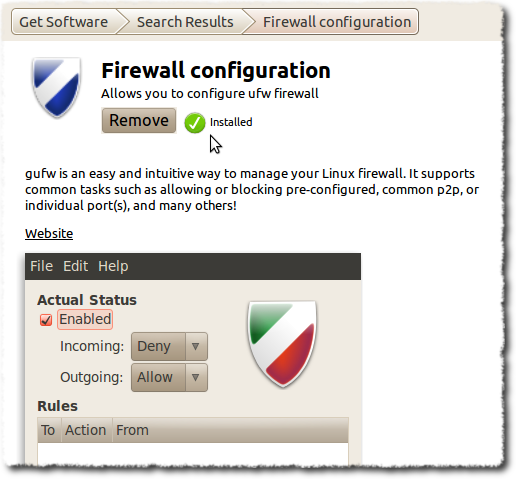 The application is located (once installed) in System->Administration->Firewall Configuration.

Are you sure your ubuntu desktop is exposed directly to the internet? Usually there is a router inbetween, which already acts a firewall.

Otherwise you can install Firestarter, if you are paranoid about what services you run yourself.

In general though, it's not needed. What is needed however, is that you make sure you install security updates in a timely fashion.

By default samba, and avahi don't expose themselves to anything but local ips'. Avahi runs by default, sambda is something you install manually. (when you choose to 'share' a folder, the install dialog for samba pops up)

Other than that, no incoming connections are excepted by default on an ubuntu install.

I think that you need to look into iptables.

iptables is the firewall that is installed, by default, in Ubuntu. There is a HowTo here. If you are not command line fluent then you may find Firestarter a useful addition as it added a GUI on top of iptables.

There is a good HowTo here.

You should also take a look at AppArmor : https://help.ubuntu.com/community/AppArmor

AppArmor allows you to control every application that has access to the Internet. With this tool you can control which files and directories are accessed by this application, and which posix 1003.1e capabilities. This is very, very powerful.

Many applications can be profiled easily by installing the apparmor-profiles package from the repositories.

Not the answer you're looking for? Browse other questions tagged networking configuration security or ask your own question.

3
My computer may have been compromised, what should I do?

2
Security considerations for a default install?
29
What precautions should I take with .debs I find on the internet?
6
how to remove tooltip message feature from all of Ubuntu 12.04 desktop and user applications?
11
What should I do when I've hit "start a new shell to examine the situation"
2
So I used fixubuntu as a privicy measure, what other precations should I take using Ubuntu Linux?
3
Was my SSH server compromised? If so, how, and what steps should I take?
0
Ubuntu 18.04 LTS cannot get IP address when directly connected to the internet