How to create a launcher on the desktop which opens a random application?

I want to make a launcher which opens a random application. So I looked it up on this site and I found this:

But I have a right-click menu on my desktop that looks like this: 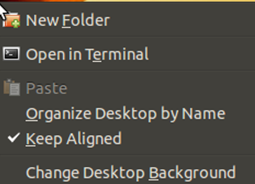 So now I still don't know how to create launchers. Does anyone know a way for dummies?

Starting with Ubuntu 11.10, this is the fastest way (at least for me) to create a new launcher on your desktop.

That being said, let's make a script called random_app which will open a random application:

Save the script in your ~/bin directory and make it executable using the following command in terminal:

Now, you can create a launcher on your desktop as it is explained here for the script random_app:

463
How can I edit/create new launcher items in Unity by hand?
290
How can I create launchers on my desktop?
10
How to create a shortcut to start a Windows application with Wine?