How do I free hard disk space allocated by Virtual Box disks?

I had multiple Ubuntu VM's installations, and the host is also Ubuntu 10.04 LTS. After I deleted the VM's, the space wasn't reallocated to the host.

Do you know any solution?

From the VirtualBox Manager you can easily manage you virtual hard disk by selecting File -> Virtual Media Manager or by pressing Ctrl + D.

This will display a list of all virtual hard disks known to the Virtual Box Manager: 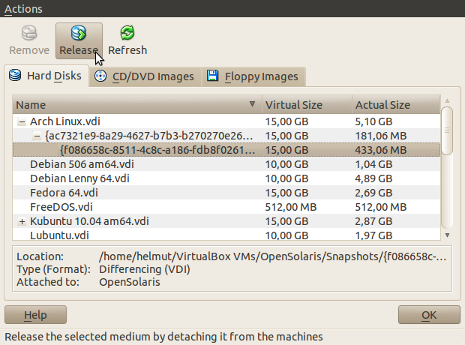 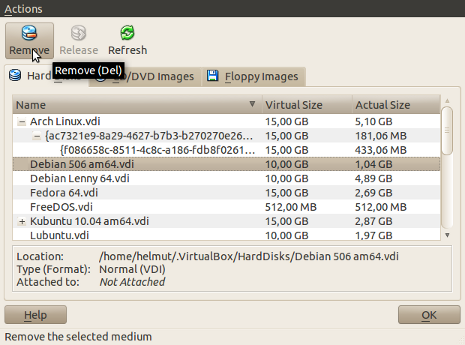 After a security message you will have the option to free the space occupied on you hard disk by deleting the virtual hard disk file or to keep this file for further usage:

The Virtual Box Media Manager is the preferred method to delete hard disk file as only then all associations to Virtual Box are released securely.

However if you had removed the Virtual Box application you need to manually delete the virtual hard disk *.vdi files that are stored in the location you defined in Preferences -> General -> Default Machine Folder either with your file manager (e.g. Nautilus) or from the command line.

Not the answer you're looking for? Browse other questions tagged virtualbox delete disk-usage or ask your own question.

2
I uninstalled virtualbox, do I get the allocated storage I gave it back?

2
Disk Space Full
3
btrfs: not enough free disk space, but device not fully used
0
How to increase disk space given to Virtual Box VM through the GUI?
0
Low disk space (free space was > 500 GB yesterday)
1
How do I free disk space allocated to virtual box after uninstallint it?
0
"Low disk space" messages despite ample virtual space
2
Unable to free up disk space