However, when I go to the Customize and Control button and then choose the option Import Bookmarks and Settings under the Bookmarks menu item, it gives me this: 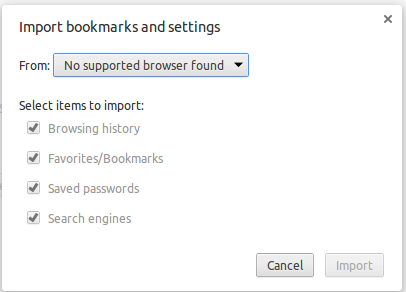 I have Firefox and Chromium as up to date as the official repositories (I believe), so I really have no clue what is going on.

I have attempted to import directly from HTML, but it only imports the first set of bookmarks, nothing beyond that (where all of the bookmarks I really want are.)

Can I import the JSON Firefox backup file into Chromium, or am I stuck manually entering all of these bookmarks into Chromium?

The following packages will be upgraded:
liblightdm-gobject-1-0
lightdm 2 upgraded, 0 newly installed, 0 to remove and 0 not upgraded

I guess I will do so when I can, but does anyone know if I can force an upgrade of only certain software (Chromium for example.)

Thanks to @ChrisCarter for attempting to help me solve my issue, update did it!

Not the answer you're looking for? Browse other questions tagged firefox sync chromium or ask your own question.

70
How to install the latest stable version of Chromium?
9
Can I sync bookmarks between Firefox and Chromium?

4
Chromium doesn't work
9
Can I sync bookmarks between Firefox and Chromium?
4
How to get rid of bookmarks in synced Chromium
0
Firefox import bookmarks/settings dialog
51
Transfer bookmarks from Chrome to Firefox
0
Unable to export Bookmarks to newer version of Ubuntu
1
Chromium Profile from .deb package to snap version