The volume “Filesystem Root” has only 533.9 MB disk space remaining

I have run into this problem two days ago. The OS warns me that root has limited
disk space; however this should not be the case since I have 3 separate logical partitions for Ubuntu. Also it allows me to click the button examine, but I am not able to locate the problem that way? What can I do and what is the remedy? Inform me if further information is required.

Thanks for your assistance

Can I somehow include /usr directory in another mount point or the partition for the home folder without risking losing my data?

The culprit seems to be the /usr directory. The problem occurred after a full TexLive LaTeX installation. The output of lsblk is as follows: 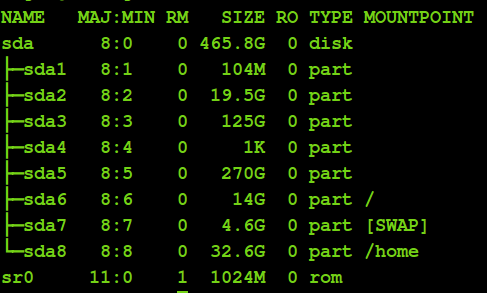 You can use the "Disk Usage Analyser" to see what is using all of your drive space.

To delete the largest files/folders

After performing the above steps and with the file path to a larger file/folder which you want to delete, you can do the following:

Mounting a separate partition on /usr

This would be my suggestion. Use the following instructions:

The below steps are optional, but will delete redundant copies of the /usr folder still on your original / drive, freeing up space.

Can the files outside the home directory not be copied to an external drive?

No, they can not. You should not manually delete (or move away) any files outside of your Home folder unless you (you yourself, not apt-get or similar) put them there.

Is having two mount point at the same logical partition possible?

No, that is not possible.

I had once a error loop in a php app, and the apache log folder had a few GB.

The root file system is located under /.

The message you are receiving tells you that the disk partition that is mounted on the root file system (/) has 533.9MB available. However, this does not include the other two partitions.

You can see more information about the partitions and their mount points by typing lsblk.

Boot the live cd and run gparted. Shrink your home partition to free up some space at the end, then copy the swap partition there, and delete the original swap partition, then expand your root partition into that free space.

I've faced the same problem and when i run df -h

I found that /boot using 100% of it's space and that mainly because of i didn't remove old kernel versions!

i have found a lot of kernel versions installed and that's why there was no space in my /boot directory! and thus i can't even install new updates from Software Updater.

But By careful not to remove your current kernel version.

You can also Install Ubuntu Tweak and using it you can remove all your old kernel versions.

To install Ubuntu Tweak you can run the following commands:

Here's all "askubuntu" pages that help you to do this ;) my thread.

What is the safest way to clean up /boot partition?

Is it safe to remove old kernels after installing the latest mainline?

This solution works with me :D

2
Should I increase my partition size when the volume “Filesystem Root” has only few disk space remaining?
296
What is the safest way to clean up /boot partition?
14
Is it safe to remove old kernels after installing the latest mainline?
4
How to run Ubuntu Tweak's janitor automatically?

0
How can I remove the Ubuntu 11.04 disk partition so that there is enough free disk space to install 12.04?
10
How does one find out which application is associated with an indicator icon?
33
“The volume boot has only 0 bytes disk space remaining”
0
how to uninstall Ubuntu 12.10 to install Ubuntu 12.04 with only Ubuntu 12.10 with usb pen drive (Startup Disk Creator doesn't finish the creation)
0
How do I change how much disk space Ubuntu has?
1
My Ubuntu 12.04.2 Online Accounts only has Google and Windows Live accounts. Where are the others?
1
No disk space left on root