What's a dead ogonek, and where is it on my keyboard?

I was changing a shortcut on gnome terminal and I found that: 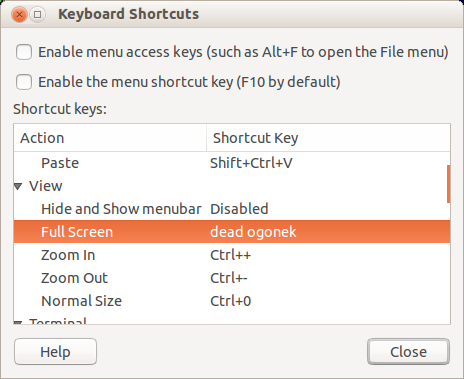 An ogonek is an diacritic mark that looks like a right-facing hook placed underneath a letter. It originates from central European languages such as Polish and Lithuanian.

A dead key is a key that doesn't insert any character when you press it, but affects the next character you type. Dead keys add an accent to the next letter. So if you press dead ˛ then A, you get the character Ą.

It's weird to have a shortcut on this key. Unless your keyboard layout is meant for a language that uses this accent, you wouldn't have this key.

I've never heard about this "dead ogonek", but I googled something for you, which may probably be helpful:

Here you can find the explaination of a keyboard dead-key: http://en.wikipedia.org/wiki/Dead_key

And here what does "ogonek" mean: http://www.personal.psu.edu/ejp10/blogs/gotunicode/2009/01/ogonek-vs-cedilla-accent.html

There are so called "dead" keys which do not produce a character when typing but are used to put diacritics such as accents on characters.

One of these diacritics is the Ogonek, or "Nasal Hook", below shown for the letter O: