Is there a way to "colorize" manpages output? I mean - the output of for example:

I use the following shell function to view manpages in Vim, which provides nice syntax highlighing:

aha. adding this to ~/.bashrc does the trick. It's not perfect though. but hey:

Does it have to be in the terminal?

Else you can use: System->Help->System Documentation and on the left of the window that comes up click "Manual Pages" (found this tip here)

Or you can use Konqueror, which shows the man pages like this: 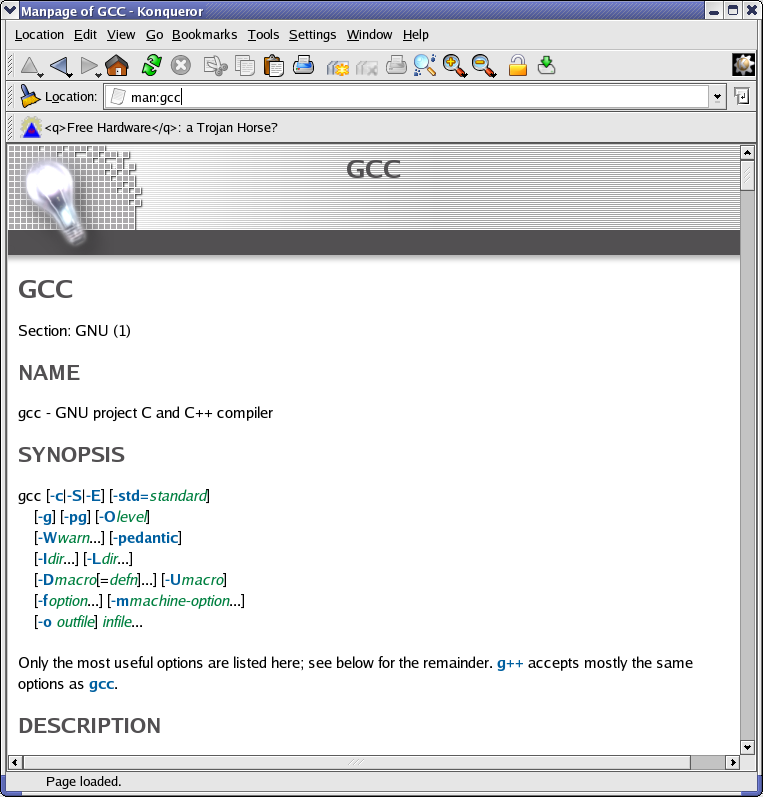 The answer Adam Byrtek seems to limit lines to 80 characters and doesn't reflow text when you resize your terminal.

You can fix this by setting MANPAGER instead. You can also set PAGER like daithib8 does but that is more general. MANPAGER overrides PAGER for the man command.

He has some pretty good extra options such as setting ts (tabstop), nonu (nonumber), and unmapping i (insert). So I will merge the two solutions. Also made some improvements like using the command command and expanding arguments with "$@"

EDIT: scroll down to my UPDATE to see benefits of using this messy form and a cleaner way to write the function with some extra vim mappings.

But doing all this is a really big mess. The following solutions require installation but they are cleaner solutions.

These solutions don't have the Vim: Reading from stdin... that the above solution has.

I recommend daithib8's answer except to use MANPAGER instead of PAGER since this question is just about manpages. And I would also add it to my .bash_profile or .profile so it doesn't get exported on each invocation of bash. You will have to install most though.

most doesn't have hjkl movement like in vim and less, but it is the fastest.

Also, vimpager is pretty good. I like using it for huge manpages such as man bash. You get all the cool things from vim such as line numbers number, highlighted search hlsearch, and all your vim plugins.

If you have YouCompleteMe installed vimpager also doesn't show this message:

Not sure why, but it's nice not to see that.

Startup can be a bit slower than most because vimpager sources your .vimrc, which can be a good thing, if you want to use your vim plugins. To disable .vimrc sourcing:

You can also do a hybrid approach with functions:

So now, export MANPAGER will set your default MANPAGER in your .bash_profile or .profile, but you can use any one of these functions to quickly use another MANPAGER.

Actually, vimpager is a little different than actual vim. For example, in normal mode, w is mapped to b and b is mapped to & <C-B><SNR>1_L. But this is how other pagers are - less doesn't have a cursor.

If you would like to use actual vim, with a messy solution, I found this. It suppresses the Vim: Reading from stdin... with a hack. Still has the YouCompleteMe message though. You can probably set another -c command to do turn off YouCompleteMe. But I'll just ignore that message.

In newer vim versions, you can avoid this hack with --not-a-term:

I cleaned up the function with newline escapes because this is the version I am using.

You might want to look through the vim options passed to customize. I looked through them from all those posts I listed and chose the ones I liked. Or you can just copy me.

You could also parse vim --version to determine whether to use the hack or --not-a-term. I won't do that here.

If you would like to set this vim method as your default MANPAGER, do the following:

You could also do export -f on the functions I showed earlier, but it works in bash but not POSIX shell, so you would have to put it in .bash_profile instead of .profile.

A similar thing can be done for nvim but I'm not gonna add it here unless requested.

Not the answer you're looking for?Browse other questions tagged manpage or ask your own question.

7
Can I get man pages without installing the corresponding packages?
3
What does the number in brackets after a command in the manpages mean?
4
Are any other systems' manpages available on Ubuntu?
6
Why can't I find any manpages?
4
All manpages broken
1
Some system call man pages missing
1
Dev Manpages are not completed
0
How do you know the manpages name for a given package?