How to use Alt+Shift to switch keyboard layouts?

I recently upgraded to Ubuntu 13.10, with the new keyboard handling system. The little "switch keyboard" option does not let me set it to Alt+Shift. How can I get this keyboard binding, as I have absolutely no interest in using the Mac-esque Super+Space combo?

The bug affects many people, its importance is set to "High", so we may expect that an official fix will be released soon. You can subscribe to notifications about this bug on launchpad.net, so that you receive an email when it's done.

Currently, a patch aimed at resolving this issue is being tested. By now it seems to work for most users, though certain problems remain. To install the patch, use the following commands:

A system reboot was needed in my case to make it work (simple log out and log in may be sufficient).

Note: Originally, the patch was located at ppa:attente/1218322. If you have previously installed it from there, you can first purge it as follows

and then execute the three commands above.

Alternatively, you may consider using a combination containing a non-modifier key (a letter, digit, space): try, for instance, Alt+Shift+Space (this will work without installing any patches).

Note that the keyboard shortcuts for switching layouts still do not work on lock screen (it is a separate bug). If you are stuck on lock screen and unable to enter the password because of the wrong layout, simply click the language indicator icon on the right of the password field.

Many thanks to William Hua (attente) for his Modifier-only input switch PPA. As he said, he will keep the PPA up-to-date until a correct fix for this bug is released.

After I added this PPA to my list of sources using the following command:

and after I upgraded my system using:

I could change the default Super+Space keyboard shortcut to Alt+Shift: 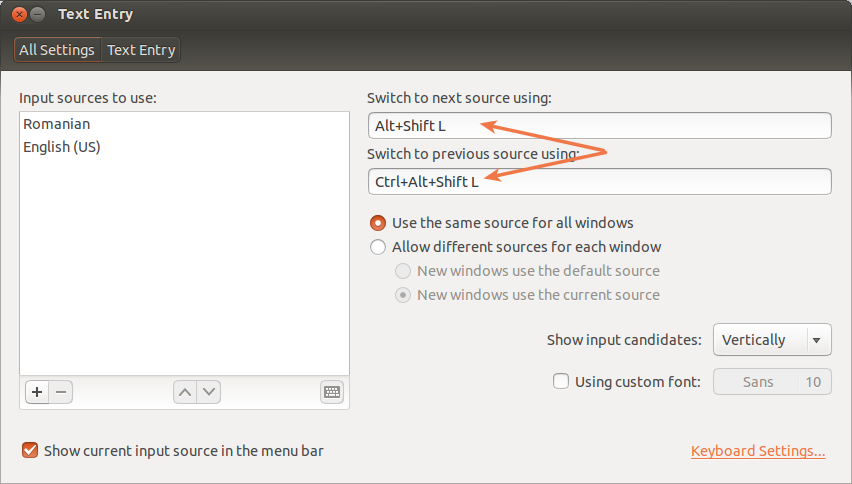 In Ubuntu 16.04 with Gnome 3.18, you can make it work using dconf Editor (should work for previous versions as well since the bug seems to be quite old):

In Ubuntu 12.04 LTS, in the Keyboard Layout Options window I could select Key(s) to change layout and mark the binding of my choice. I use Shift + CapsLock to toggle the layout from the keyboard itself without having to use mouse cursor to select the required layout from the panel indicator. The same key combo seemed to work to serf through or select between multiple layouts. (But in Ubuntu 13.10 it wasn't so easy.) 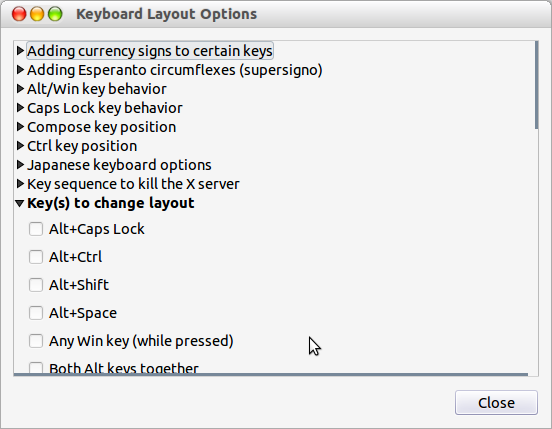 In the Keyboard settings window, under Shortcuts tab, I select Typing. The default for Switch to next source is Super+SPACE which didn't seem be working for me and so by clicking on it and I assigned a New Accelerator..., to change to next Layout (I used Super+L).

(Then I assigned something similar for Switch to previous source using the same preferred layout, and then began to test them. Switching from the preferred layout to the alternate worked but the reverse did not. Please refer the next step for the fix.) 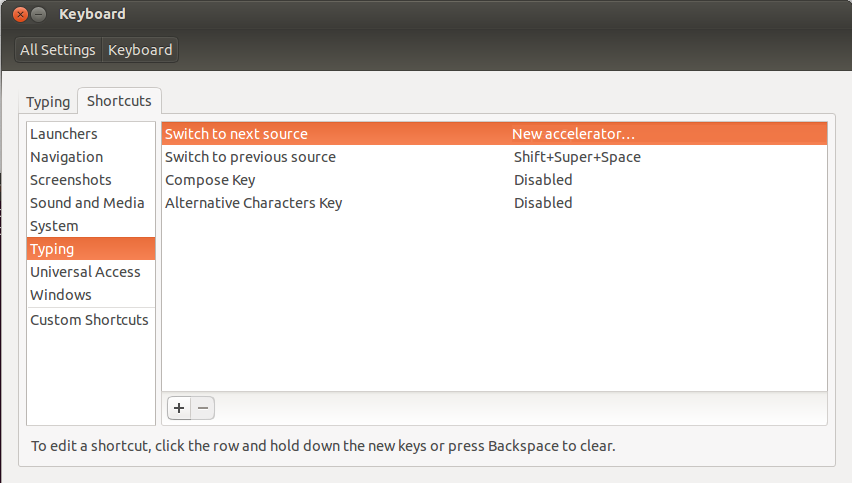 The new accelerators for the key combos that I used looks like this: 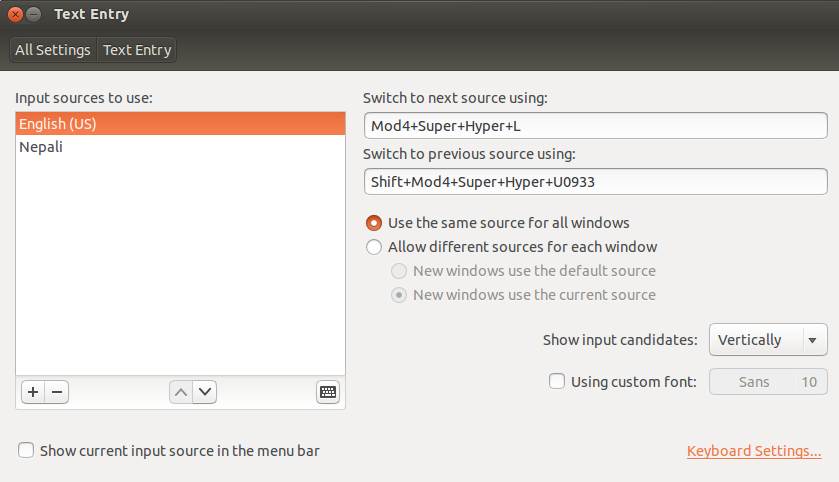 I could then switch to layout (A) using Super+L and back to layout (B) using Shift+Super+L.