Are PPAs safe to add to my system and what are some “red flags” to watch out for?

I see a lot of interesting programs out there that can only be obtained by adding a "PPA" to the system but, if I'm understanding correctly, we should stay within the official "repositories" for adding software to our system.

Is there any way for a novice to know if a "PPA" is safe or if it should be avoided? What tips should the user know about when dealing with a PPA?.

PPA (Personal Package Archive) are used to include a specific software to your Ubuntu, Kubuntu or any other PPA compatible distro. The "safeness" of a PPA depends mostly on 3 things:

Basically stick with this 3 and you will be safe. Always look for the maker/maintainer of the PPA. Always see if many users have used it and always see how updated the PPA is. Places like OMGUbuntu, Phoronix, Slashdot, The H, WebUp8 and even here in AskUbuntu are good sources to find many users and articles talking about and recommending some PPAs that they have tested.

Semi Stable PPA - X-Swat PPA is a in the middle PPA between bleeding edge and stable.

Bleeding Edge PPA - Xorg-Edgers is a bleeding edge PPA although I should mention that after 12.04, this PPA has become more and more stable. I would still mark it as bleeding edge but it is stable enough for end users.

Selectable PPA - Handbrake offers here a way for the user to choose, do you want a stable version or do you want the bleeding edge (Also referred to as Snapshot) version. In this case you can select what you want to use.

Note that in the case of using for example the X-Swat ppa with the Xorg-Edgers PPA, you will get a mixed between the two (With priority towards Xorg-Edgers). This is because both are trying to include almost the same packages, so they will overwrite each other and only the most updated one will show in your repositories (Except if you manually tell it to grab the package from X-Swat).

Some PPAs might update some of your packages when you add them to your repository because they will overwrite with their own version a certain package to make the PPA software work on your system correctly. This might be some code packages, python versions, etc.. Other like the LibreOffice PPA will remove all existence of the OpenOffice from your system to install the LibreOffice packages there. Basically read what other users have commented about a specific package and also read if the package is compatible with your Ubuntu version.

As the comment below suggest by Jeremy Bicha, some bleeding edge (PPAs that stay very up to date including adding Alpha, Beta or RC quality software in the PPA) could potentially damage your whole system (In the worst case). Jeremy mentions an example of many.

To develop PPA's on launchpad, the contributor must have signed the ubuntu code of conduct. This signifies the the developer must abide to a minimum set of standards.

Usually people should then consult the ubuntuforums to see who has used particular ppa's and if they could cause any issues.

For a "novice" or "noob" - my best advice is to steer clear of PPA's until you feel confident that you understand a few things about the command line, potential error messages and a few things how to diagnose issues.

To remove ppa's causing issues, you can most of the time use "ppa_purge"

If you are feeling nervous, then consider an image backup of your computer with a tool like clonezilla. That way, if things go wrong and you cant resolve it, at least you have a quick means to restore your computer back to the way it was before you started playing.

Having said all that, ppa's are extremely useful to get the latest versions of software - especially for those that dont try to upgrade every 6 months and stick with the LTS version of ubuntu.

It isn't just a matter of malware, as has already been said. It is also that some of the software might really still be in the testing stage and not ready for production use. If you install it and rely upon it to get work done, you might find that it is buggy, unreliable, and can crash - leaving you without the work you have done.

Some of it might also not get along well with other aspects of Ubuntu, such as Unity or Gnome, causing problems that are difficult to trace, and perhaps even making your system unstable.

This is not because the software is bad, but because it has perhaps not yet been fully tested, or because it was made available so that people could test it, but not yet intended to be generally released as production software. So you should use caution, although some of it is really quite good.

A number of months ago I installed a recommended package from a particular PPA, and it trashed my system enough that I had to reinstall Ubuntu. I was a new user and didn't know what else to do; with a bit more knowledge I might have been able to solve the problem and restore it without doing a reinstall (although that, too, was useful to me in learning Ubuntu, but if I had worked saved on my machine I would have lost it).

So be careful, ask questions, make frequent backups (!!!), and know that malware is unlikely (though not impossible).

All the concerns listed by others here are extremely important to understand. That said, since this is open source, we can tell exactly what the PPA has changed from the version of the package in Ubuntu. We'll use the PPA from this duplicate as an example.

First we'll grab the source from the PPA dget a tool that will download all the pieces of a Debian source package given a link to the dsc file:

I found that link by clicking "View package details": 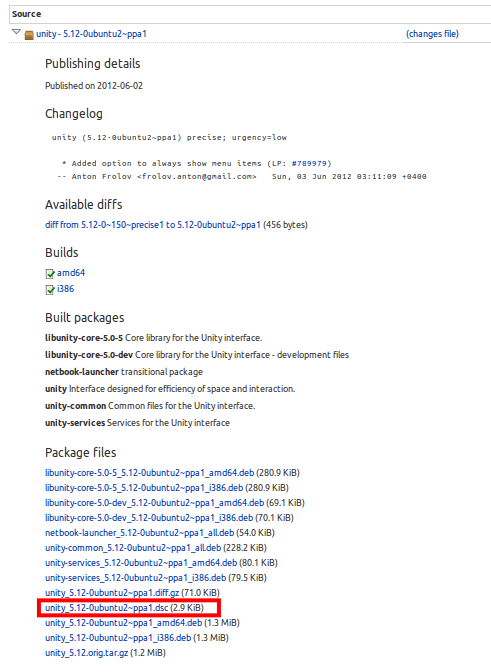 Next, we'll get the source of the package in the Ubuntu archive:

Finally, we'll use debdiff to see the differences between the source of the two packages:

The output of that command is about three hundred lines long, so I'll put it on a pastebin instead of directly into the window. Now, I can't vouch for how good the code is since I don't really know C++, but it seems to be doing what it claims and not anything malicious.

A PPA is a web folder that contains software you can install. It really isn't much more complicated than that. When you install a package, you do that with root privileges and the package has scripts that are run, so they are run as root. That means installing any software is dangerous and you do need to trust the developer or distributor.

An apt archive, PPA or otherwise, is polled regularly for updates to software you have installed. The "problem" with that, is that anyone can provide a newer package of software you have installed. For instance, you can add a PPA in order to get a nice theme and automatic updates of that theme. But once you have added that repository, the owner can add a patched openssh-server package, for instance, and it will appear as an update in Ubuntu. This can be done a year after you added the PPA, so you need to pay attention to updates.

The PPA system does prevent third-parties from tampering with the packages, however, so if you do trust the developer/distributor, then PPAs are very safe. For instance, if you install Google Chrome, then they add a PPA so that you'll receive automatic updates for it. They add "deb http://dl.google.com/linux/chrome/deb/ stable main". If the DNS server you use was hacked to point dl.google.com somewhere else, then they could push patched software onto everyone who had installed Chrome. But Ubuntu would refuse to install them since they could not be signed with Googles private key. So in that regard, PPAs are very secure.

It is not possible to say that a PPA is safe or not. It depends on the people who use it to distribute software. With free software, people can look at the source and see if it is safe or not. When lots of people use an archive, like Ubuntu regular archives, then you have peer review. Small archives with few users don't have that, so they are less trustworthy. The main lesson is that no matter what system you use, you should take care when installing software.

Building upon Luis Alvarado's answer, you should be aware of these risks:

and you should be attentive to these factors:

The packages on PPA's aren't checked for things like malware. So while someone might be packaging something like XBMC for you, they could very easily also be adding some spyware/malware as well. This is why you shouldn't just add any random PPA.

When you add ppa and install a program through it.

Basically you give permission to reside that program in allowed executable area (/bin/ /sbin/ /usr/bin/).

Now if program itself is/has somehow a malware then system won't complain about it as you are the one who added ppa considering its trustworthy.

For any other ppa its upto you/user to decide whether to trust it or no.

Not the answer you're looking for? Browse other questions tagged security ppa repository or ask your own question.

22
Should I trust these packages and ppas?
13
Using an unofficial PHP PPA on a production server
8
could you possibly install a malicious program using apt-get?
1
Can I trust repositories
3
What is the risk in adding unknown PPAs?
3
Is this PPA safe and will it work?
3
Why Macbuntu pack always corrupts my system?
0
Can 3rd-party package repositories be trusted? (Are there criteria to test if they're trustworthy?)
0
Is there a way to estimate if the addition of a ppa will be harmful?
1
Is it safe to install applications from PPAs?
See more linked questions

523
What are PPAs and how do I use them?
5
What security policies exist in place for packages and scripts?
6
Any real-time antivirus for Ubuntu?
2
How can I (de)activate a PPA from the command-line with a single command?
0
Choice of repositories and link with Software Updater warning message “Not all updates can be installed”?
10
I received a malicious email, how do I make sure I'm safe?
25
Are Snap and Flatpak apps safe to install? Are they “official”, approved or tested for a particular distro version?