Why do du -sh and the file manager disagree?

I would like to know why the directory sizes I get when I execute du -sh disagree from the ones the file manager shows. What do they do differently and how big is my data really? I am not so much interested in the size it takes on the disk (because of blocks and stuff), I just want to know how big the actual data is.

Long answer: The difference stems from the different ways computers and humans count. Most current human societies do their math with the decimal system, on the base of 10. Not all cultures in history did, that's why, for example, we divide the day into 24 hours. But with most things, we use 10, or multiples of 10, or 10 to the n-th power. This is evident in the International system of Units (SI), which uses prefixes to mark 10 ^ 3 = 1000. 1000 gram equals 1 *kilo*gram, the 1000th part of 1 meter equals 1 *milli*meter and so fort. Technical, 1000 kilogram would be 1 "megagram", but traditionally, we use a different word for it, "ton". Still, it is based on 1000.

"Back then", most people who used computers knew about this, and in the order of scales that were used in those days, it didn't make munch of a difference. Whether a file is 1000 bytes "large" or 1024 bytes, doesn't really matter in most cases. But time went on, computers became omnipresent, and the numbers became larger. Today, many computer users don't know about 1000 vs. 1024, or they don't care. It doesn't make too much sense to explain to "Joe Everbody", that with almost everything, "kilo" means "1000 of it", but with computers, it's different. Additionally, the difference starts to get significant. If you compare a "Gigabyte" based on 1000 to a "Gigabyte" based on 1024, the difference is roughly 10%. With "Terabyte" and larger, the difference is an even larger fraction.

Therefore, over the last years many countries decided to differentiate between those two calculation systems. The classical prefixes kilo-, mega-, giga-, tera- etc. are today almost always used based on 1000. So, a file with 1024 bytes would no longer be "1.000 kilobyte", but "1.024 kilobyte". The units based on 1024 got new prefixes, with the first syllable of the "old one" followed by "bi": Kilo -> kibi, mega -> mibi, tera -> tebi and so forth. The symbols are KiB, MiB, TiB and so forth.

du offers the --si switch. It works like -h, but calculates with SI units instead of based on 1024. So

would give you a size in KB, MB, GB etc., while

would give you a size in KiB, MiB, GiB etc.

The right way to find out the right disk space usage is using du command (du -sh). That's because your file manager (like Nautilus) doesn't take into account hidden files.

Or you can use the Disk Usage Analyzer. Use the following command to start it from terminal: 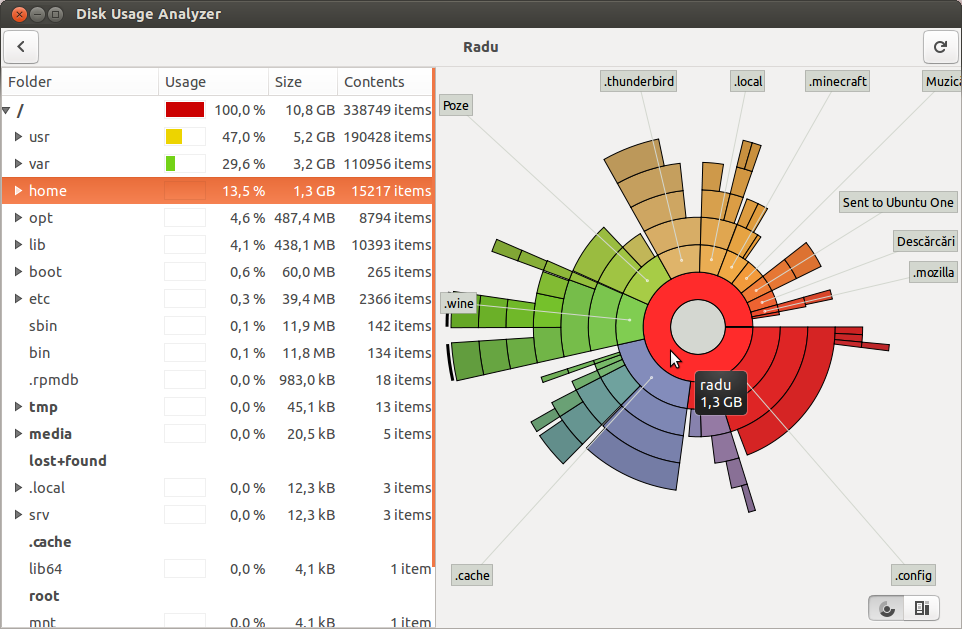 See also: How to find - Size of a directory & Free disk space.

I guess you use Nautilus as the file manager: hidden files are not taken into account. That's a known bug since 2006.

Not the answer you're looking for? Browse other questions tagged disk-usage filemanager or ask your own question.

5
How to make the file manager show file sizes in GiB, MiB, KiB?
1
Why did my download claim to only take 4.6 GB, and the file itself takes up 4.9 GB?
0
Pendrive capacity decreased after installing ubuntu on it

20
What is taking up so much space on my disk, beside the filesystem?
5
Find cluster size
9
Why do df and du show different output?
27
Display folder sizes in file manager
6
Is there a way to make Thunar display “recursive” file size?
2
Disk usage increasing over time. Why? And how to fix?
3
/var and /usr eating up space- low on disk space - What do I delete?
4
How to show actual size and allocated size on disk of a file in Ubuntu?
0
Freeing Up Disk Space /var