How is it determined which application is to open a file of specific mime-type?

I saw the following question, but I can't comment yet. So I decided to create a separate one.

I have both transmission and deluge installed. And I have no association for application/x-bittorrent mime type, based on contents of /usr/share/gnome/applications/defaults.list and ~/.local/share/applications/mimeapps.list. But it seems .torrent extension has association and it's transmission. That is when I double-click a .torrent file, transmission is opened. The same goes for when I open it in chromium.

The question is how come it is transmission? Why not deluge? Both have this mime type in their .desktop files. Are the associations stored somewhere else?

The default is transmission. Changing order in /usr/share/applications/mimeinfo.cache changes the default application. Probably one shouldn't rely on this behavior.

There are two ways a MIME type and a .desktop file are associated.

The first way is through *.list MIME config files (many exist on the system, see below). For example, a typical entry in ~/.local/share/applications/mimeapps.list might be:

This means that the preferred application is transmission, if it cannot be found, then the second choice is deluge.

The second way is through the .desktop file itself. The application advertises which MIME types it can open. For example, in transmission-gtk.desktop, we have the following line

which indicates that this program can handle those two MIME types.

Which Application To Use?

The association between MIME types and Applications is defined by the freedesktop.org standards. Here are the steps taken when determining which application (i.e. which .desktop file) to launch for a given MIME type.

Step 1: Look for an association in the MIME config files. The lookup order is as follows:

Step 2: Once all levels have been checked, if no entry could be found, the implementations can pick any of the .desktop files associated with the MIME type, taking into account added and removed associations (which exist in the MIME config files).

Although you do not have any MIME config files, the reason that transmission is being used is because of Step 2 as defined by the standard. Check your transmission-gtk.desktop file to see whether it advertises its ability to open torrents.

I suggest reading the linked document for a full understanding.

You can choose the default one in a file Properties > Open with [tab]; for example for a video file: 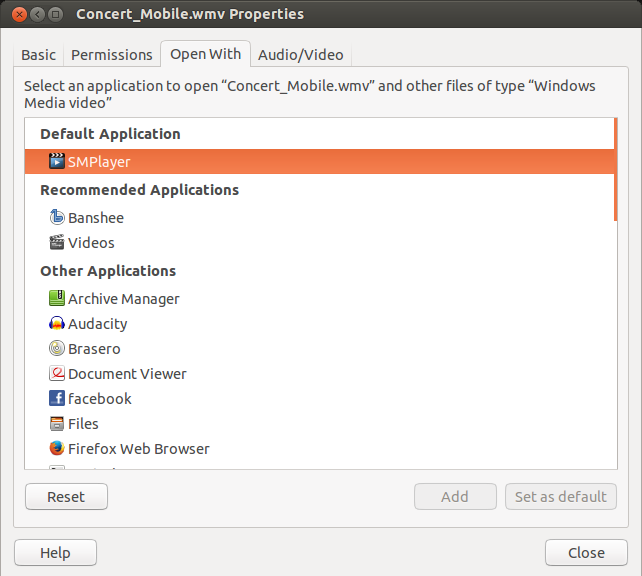 You can simply select your preferred app and set it as default.

You can also see the open with list when right-clicking on the file. Double-clicking opens it with the default one.

Not the answer you're looking for? Browse other questions tagged files mime-type file-association or ask your own question.

4
How can I deal with file association in different application(not in Nautilus)?
4
Where is the file used by file(1) and libmagic to determine mime types?
2
How does Ubuntu create “user-defined” file associations?
1
xoj (Xournal) files handled as gzip despite presence of correct MIME type
0
17.10 seahorse-nautilus mime association for “decrypt file”, getting really frustrated at the ubuntu way
0
How to change the application when opening a folder on the desktop
0
Adobe Reader application association issue