Installing Ubuntu 13.04 in a different partition than Windows

I need help installing Ubuntu 13.04 to my computer. I have downloaded Ubuntu 13.04 (64-bit) and burned it to a DVD. I test drove the new distribution and it worked great, but installing it poses a bit of a problem for me (I'm an inexperienced Ubuntu/Linux user). Here's what I want to do.

I have two partitions on my HDD. The first is C:\ and it is where Windows Vista Home Premium (32-bit) is installed (please note that my machine's processor is an AMD 64-bit and that is why I downloaded the 64-bit flavor of 13.04). The second is D:\ and it was where Ubuntu 12.04 used to reside prior to trying to install 13.04.

When I tried installing 13.04 alongside of Windows Vista, it does not allow me to pick the partition I want to install to, so I tried "Something Else" and I could not get the installation to work there either. Here's what I tried:

I set up sdb as the partition I wanted to install Ubuntu in and set the mount point to / (I don't even know if that is right), and then it told me that I didn't have a swap partition/space, so I reduced the size of sdb and made another partition (sdc) out of the remaining space, but I didn't know how to label it as "Swap" nor do I know where to set the mount point of sdc so I'm stuck.

I just thought of one thing and that is could I go and delete the partitions I have set up for Ubuntu using Disk Management in Windows and then extend Windows into that space and then try installing Ubuntu alongside Windows Vista? Would that be the easiest way to do it?

Can anyone help me out here?

First off, in Linux every hard drive has its own letter going from 'sda' to 'sdb' to 'sdc' and so on. But for every partition, you will get a 'sda1', 'sda2', 'sda3', and so on for each partition on a hard drive.

There are two ways to fix this, the automatic way and the manual way. In the end, they do exactly the same thing. If you know what you are doing and want to spare some time, go with the manual way

I hope this helps, and just place a comment if you encounter problems!

First of all, you probably mean sda1, sda2, and so on, not sdb and sdc. But anyways, here's what you can do:

Follow the exact same steps you did, and when you get to the swap part, you'll need to pick the "Use as swap area" to set the swap partition. Here's a screenshot: 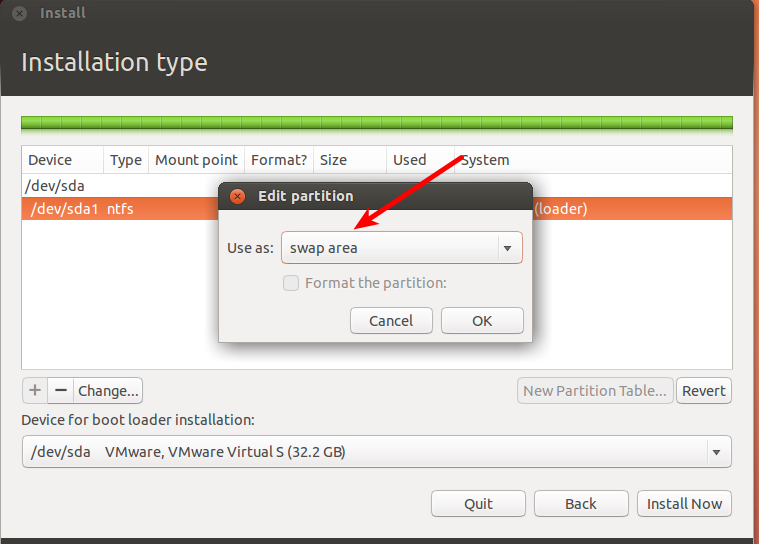 You can let Ubuntu take care of all of this for you.

Leave a free, unpartitioned space on your hard drive. Now, when you start the installation of Ubuntu, you'll get an option that reads "Install Ubuntu alongside Windows Vista". Picking that option will instruct Ubuntu to install in that unpartitioned space (it'll create the partitions it needs, along with swap), without harming any other partitions. So no, this option won't ask you which partition to install to, it automatically detects that there is free space on the hard disk, and it installs itself there.

Not the answer you're looking for? Browse other questions tagged installation 13.04 dual-boot partitioning or ask your own question.