How often should I update using apt-get update?

Someone told me to use the command "apt-get update "to update my software and hardware updates frequently. What exactly is updated and how often should I update it.

apt-get is an incredibly useful tool. Try reading this https://help.ubuntu.com/community/AptGet/Howto site to get an idea of what apt-get can be used for!

As for your specific question, @Braiam and @Alaa have very well done answers, read theirs first. Your friend is rather mis-informed. This is from the man-page for apt-get:

Obviously apt-get update doesn't download/install the latest and greatest program update(s), it only makes sure that any newly added PPAs are included in the sources.list file. This allows you to install programs from non-default sources and is also why you have to run apt-get update after add-apt-repository.

In your case you would want to run apt-get update after adding a PPA. Ubuntu automatically checks for updates either every week or as you configure it. It, when updates are available, shows a nice little GUI that lets you choose the updates to install, and then downloads/installs the selected ones.

Unless you want to force Ubuntu to check for updates, you don't need to run any special commands, just use your computer normally and you will eventually be alerted to the updates and be allowed to install them.

In Ubuntu, "software" is stored in repositories. Repositories are basically machines that contain an archive of all the software that you can install in Ubuntu.

apt-get update is a command that tells Ubuntu to "go and update your software index". So Ubuntu goes and asks each one of the repositories "what software do you have? And what version is it?" Your Ubuntu keeps a list of all of the available software and their versions.

So now, to answer your questions:

What exactly is updated?

apt-get update updates its index of packages that are available in the repositories. So technically, this command doesn't really "update" (or "upgrade") any software. The command to do that is apt-get upgrade.

How often should I update it?

I don't think there's a definitive answer here, but Ubuntu takes care of that for you. By default, Ubuntu is pre-configured to run the command apt-get update every now and then. That is why, if you leave Ubuntu for a while without updating or upgrading it, you'll see a box like this: 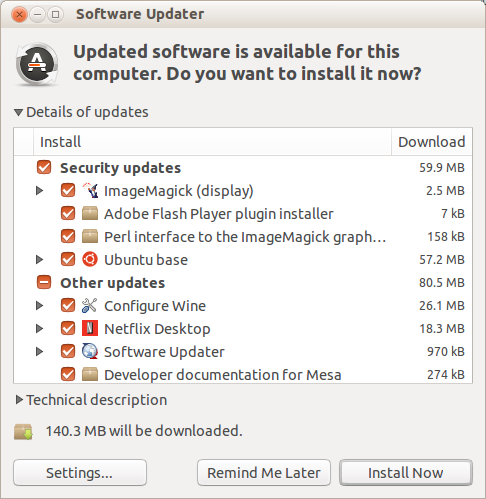 It ran apt-get update in the background, and it identified that there is software that needs to be upgraded. All you need to do is hit Install Now, and Ubuntu should start downloading and installing. Clicking Install Now is just the equivalent of doing apt-get upgrade.

Please, don't trust this "someone". He seems to be mal informed or misinforming on propose.

Lets explain what each commands of apt-get do and what apt-get is, from man pages:

apt-get is the command-line tool for handling packages, and may be considered the user's "back-end" to other tools using the APT library.

Now, this is confusing if you don't have previous knowledge. APT stands for Advanced Package Tool, and apt-get is the APT package handling utility -- command-line interface.

That said, apt-get is the transmission that controls the dpkg engine that move the entire Debian-based systems. A .deb system without apt-get is severally limited in their functionality to install, remove and upgrade packages.

Now apt-get accepts differents commands or orders, this is what each of them do, from man again:

update: update is used to resynchronize the package index files from their sources. The indexes of available packages are fetched from the location(s) specified in /etc/apt/sources.list. For example, when using a Debian archive, this command retrieves and scans the Packages.gz files, so that information about new and updated packages is available. An update should always be performed before an upgrade or dist-upgrade. Please be aware that the overall progress meter will be incorrect as the size of the package files cannot be known in advance.

Once this confusion is cleared, I think I answered the "What exactly is updated" part of the question. For "how often should I update it" is more like a opinion based behavior, but is common believe and the update-manager (a GUI) is configured like that too, is updating the indexes and upgrading the packages once a day.

Please, tell that someone that is in his wrong and direct them here or to some documentation before misguide users giving flawed advise.

Not the answer you're looking for? Browse other questions tagged apt updates or ask your own question.

0
How can I install the package iftop?

3
How often should I update my beta installation?
4
How to take control over update action?
0
errors while using 'sudo apt-get update'
14
Why Does Software Updater Say No updates Available, but apt-get upgrade Shows updates available?
2
How to update the apt-check count of “X packages can be updated” message