Is it safe to remove generic kernel image on EC2?

I was tempted to remove the *-generic kernel image from my EC2 instance since it's not the one running, according to uname. What's running is the *-virtual one. Thing is I'm not sure if it's safe, me not being comfortable with how these EC2 things work.

Technically, it is safe to remove any non-running kernels, including the generic kernels (for EC2 nodes). EC2 is powered by Xen and running a virtual kernel (smaller footprint and trimmed for guest OS) helps to maximize performance to some extent.

I've installed and purged generic kernel images (also the headers) on EC2, no issues. Don't worry, it's not going to break things.

BTW: It is recommended to use Ksplice uptrack (free for Ubuntu and Fedora) to keep your running kernel up to date (it only supports release kernels from official repository though).

For example, the default kernel for a Ubuntu Server 12.04 is 3.2.0-23, ksplice can apply the security patches (auto or uptrack-upgrade -y) to the running kernel without rebooting, so the effective kernel running (uptrack-uname -a) is actually 3.2.0-53. 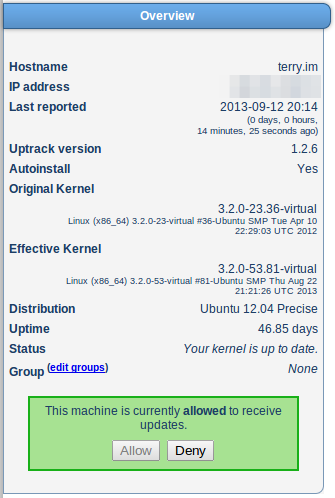 If they are the same version I suggest you leave them but if they are different versions it is ok to leave just the ones you use now.

From what I know a generic kernel is used by any driver that needs headers or modules for the current kernel knows how to find the appropriate data.

Hope I was clear enough.

Not the answer you're looking for? Browse other questions tagged 12.04 amazon-ec2 or ask your own question.