How to invoke Git GUI?

I also choose the optional packs (git-gui and gitk).

All of these steps got successfully completed but I am not sure how to invoke Git-Gui.

Can some one let me know how ?

gitk should be invoked from command-line in your root git repository. You should look into git-cola for more featureful git gui.

The Git GUI is accessible from the Lens. Press the Super key and type "Git", then click on the icon that appears: 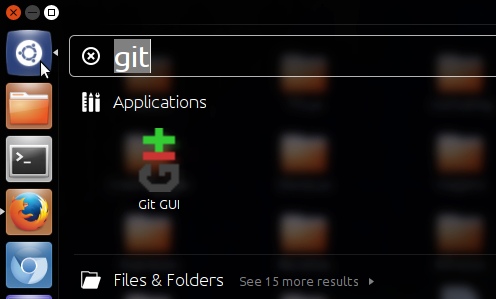 If you wish to retain the Git GUI icon in the Launcher right click on it and select "Lock to Launcher".

This is what you execute, change directory into your project directory before you invoke the command:

You will also have to initialize a git repository before you can "git gui".

Create a directory where all your source files and other assets will live:

Now you have a local git repo.

The repository is the .git directory in you project directory. dot (.) files & directories are hidden in Linux. You can see hidden files in your file manager by hitting ctrl + h. In the command line you would pass the -a parameter to the ls command:

You may not have git-gui installed. This command will install git, git-gui and a couple of other packages related to git, for Debian distros, use your package manager if you're using another family.

If you already have git installed but not git-gui, run:

I wrote a bit more information on git than just the git-gui because I thought that people coming to this page are possibly not well versed in Linux and git if they want to use the gui part of it. Sure the gui is good and it really is just an interface to the commands that you will run on the command line. The command line is more powerfúl however because you can do things through it that you can't do through a GUI and it is much quicker. You can learn the gist of git through the gui but I do recommend that you learn about the Linux command line if you want to get serious about programming and computers. There are plenty of books on Amazon that are great for that.

Not the answer you're looking for? Browse other questions tagged git or ask your own question.

5
How to make gui based setup of git server?
3
Combining git GUI with the context menu?
5
Download files from Git + GUI
2
Git gui here script
1
How can I change git history (git rebase -i) after I did a git push
51
How to start git-gui?
0
A git-gui dying because of “bad pad value”
0
Git gui not showing anything