What's a simple way to run a command, say, 8 hours from now? I can think of this way:

Is there a more "proper" way?

You can use the at command. The at execute commands at a later time. The at utility shall read commands from standard input and group them together as an at-job, to be executed at a later time.

Usually, at is installed by default in Ubuntu, but if your release doesn't include it, install via:

For more information, options, examples, and others, see the manpage in man 1 at.

Example of a relative time specification (note the space between + and the duration):

You can also use convenient shorthands, like tomorrow or noon, as in

Note: This will run the command to the left of the pipe immediately - and its output (which is piped to at) will be run by at at the scheduled time. So, the above command schedules tweet fore to be run at teatime.

The example also demonstrates how you can pipe actions into at. at -c is the way you can examine scheduled actions, which you can conveniently list with their number, as with:

Yes, you can set a cron job.

For example if now the time is 14:39:00 and today is friday, 30 august, you can add the following cron job (to be executed after 8 hours) in your crontab file using crontab -e command:

Use the Gnome-based GUI for cron, at, and the like:

The introduction of the CronHowto suggests using the gnome-schedule gui, which is much nicer than typing all the garbage into the terminal (esp. for "average" Ubuntu users who are not "power" *nix/bsd users.)

Run it by using the Unity Dash (or other applications menu) to look for Scheduled Tasks or running gnome-schedule.

On Gnome-based Ubuntu systems Gnome Scheduled tasks tool (from the gnome-schedule package) in Applications --> System Tools provides a graphical interface with prompting for using Cron. The project website is at http://gnome-schedule.sourceforge.net/; the software is installable from the Software Center or by typing

Using gnome-schedule, for a script in your home directory, a new "at" command would be set up using this type of window: 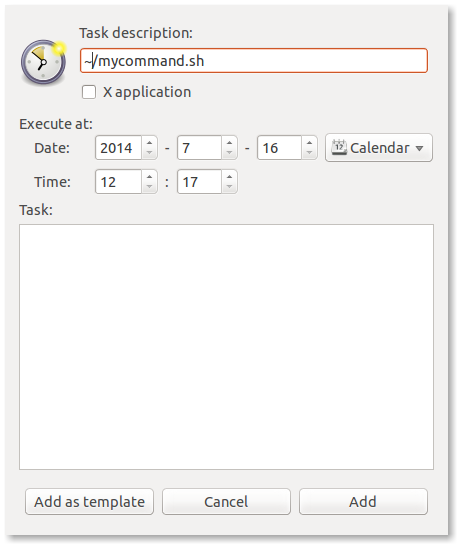 Check the output of date in a loop. This is a quick and dirty way to do this, like if you can't use at, cron, or other tools.

Say you want your script to run at noon:

Say you want it to run tomorrow at noon (today is Nov 24 for me):

Previously, this answer recommended regex, which has some pitfalls, like a lot of special characters. As well it recommended matching against the whole date string, which is more error-prone since it's locale-dependent. For example, I use some French locale formats since I live in Quebec, so if I forget about that and write until [[ $(date) == "25 12:00" ]], it will never match because the French ordering is "day month year, time" instead of the English "month day time year".

If you are running bash on a mac you will run into some difficulties using the at program. In that case you can improve on your original proposed solution of,

In order to install gnome-schedule on Ubuntu 21.04 you can do

1
Can I run a scheduled task once?
0
Execute command on time Shell Script
9
Create multiple shell aliases at once
8
Why are there different versions of a man page in the Ubuntu Manpage Repository?
2
Command-Line Alarm Clock for Ubuntu
0
How can I schedule one(!) reboot?
1
run script when modem manager detects modem

168
How can a script check if it's being run as root?
3
Display number of hours since a specific time in bash
2
Run multiple line as a single line command bash
0
How to run bash command with arguments at scheduled time
4
Measure every single command within a bash file?
1
Cannot schedule a bash script with crontab
3
how to run and debug bash script from VSCode
5
Simple Backup bash Script with nohup and rsync
10
Bash CLI: Restore previously typed command after changing it