How can I make any key into a modifier key?

When one presses and holds down certain keys like Control, Alt, Super, no release event is generated while with other keys' multiple release & press events are generated simulating the key being pushed & released several times.

I want to make some of the multimedia keys or the Fnkey on my keyboard into modifier keys, and xev shows that all of them are of the second type. Is it possible to make ordinary keys sticky so that no release event is generated?

If I understand you right, what you want is to uncheck the option "Key presses repeat when key is held down" at Menu > System > Preferences > Keyboard. 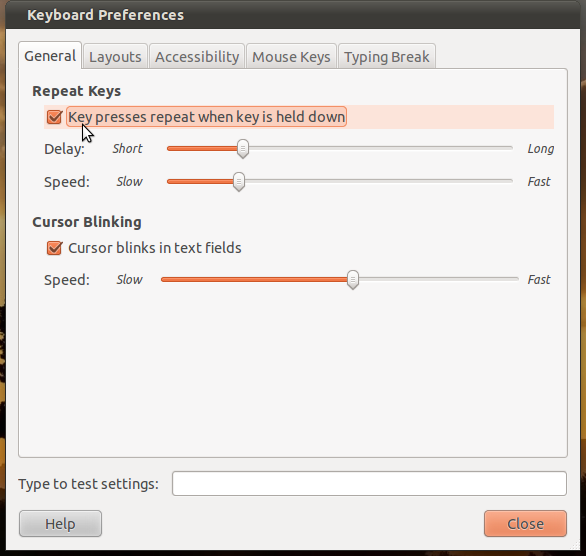 Not the answer you're looking for? Browse other questions tagged xmodmap key-binding or ask your own question.

5
How many different modifier keys can we have on a keyboard?

6
How can I remap Control+m to Enter?
4
After swapping Ctrl and caps in xmodmap, how can I make Ctrl work properly for multi-modifier combinations?
1
How can I set a certain keycode to a key and bind it to the right action?
10
How to remap key with shift and alt modifier using xmodmap?
4
How to map <modifier> + hjkl to arrow key functionality?
2
How to make XF86Explorer my new Super key
2
How to temporarily disable aa key on the keyboard after pressing it?