Is there a way to define a hotkey to solely unhide the Launcher?

I'm running Ubuntu on Parallels Desktop for Mac, where I have some limitations regarding usage of the Super key (and also problems with mouse edge detection), for example, I've read on the web that holding Super for a while should bring a list of hotkeys, but for me holding it does nothing and on release just shows the Launcher with the Dash open and focused.

Hitting Super does the same, unhide Launcher with Dash focused. Hitting Super + w and holding Super I have the Launcher unhidden with the icons being numbered for shortcut access.

Note that I'm not looking for a solution that would enable/disable auto-hide to pretend that the Launcher is being unhidden. This approach causes undesirable effects, the Launcher doesn't unhide, it just pops up suddenly, and occupies space, forcing rearrangement of icons in the desktop.

I've tried other distros, like elementaryOS, and it doesn't present any issue with mouse edge detection for unhiding the Dock inside a Parallels VM... Sadly this seems like an Ubuntu/Unity specific issue.

Alt-F1 will unhide the Launcher and put it in keyboard navigation mode. However, you can still use the mouse to select icons that are visible in the Launcher. You can also use the up and down arrow keys to traverse the Launcher. The downside is that you can't navigate down to any hidden icons with the mouse.

I have to recognize that is a very strange behavior what you asked. The best what can I do for you is to suggest you the following shell script (I named it (un)hide_launcher.sh):

Make the script executable from terminal with the following commands:

To set a (shortcut) key to run this script, go to System Settings... → Keyboard, select Shortcuts tab and click + sign to add a new custom shortcut key. For "Name" field add whatever you wish; for "Command" add the path to the script: 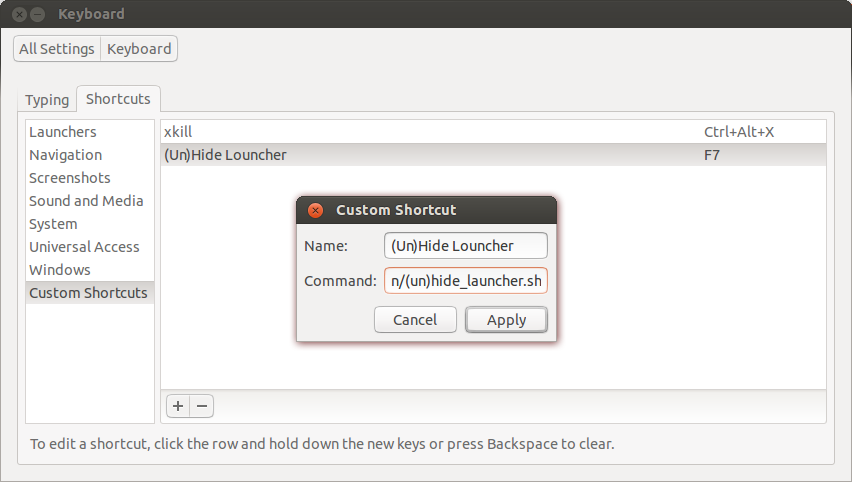 Then click where is written "Disabled" to add a new accelerator and press your key combination (I chose F7).

Not the answer you're looking for? Browse other questions tagged unity 13.04 shortcut-keys launcher or ask your own question.

9
Is there a way for non-experts to create new lenses/drawers for the Unity launcher?
0
Fresh install of 12.10 and many icons not showing on the Launcher
0
How to keep Unity Launcher hidden and locked but Super key should launch the Dash?
0
How should one lock Wine apps to the Unity launcher?
3
Unity launcher not triggered with Super key
1
When launcher at bottom, mouse click in DASH won't start app