How do I navigate to a samba location I've mounted in Nautilus on the command line?

Please note: I am two weeks old in Linux. I have found a lot of answers to this question on the internet, tried many, but all failed one way or another. Therefore I dare to ask once again in the hope that someone here could explain it simply :)

In my institute, we have a Samba server. In Windows, it is accessed by going to \\xyz.220.131.233\ and entering the login abc and the password def.

In Ubuntu, I was able to do exactly the same using Nautilus, pressing Ctrl+L and entering smb://xyz.220.131.233/. It then asks for the login and the password and connects. I can even drag a folder from here to the 'Places' and have a shortcut to the remote location.

A Mac user in my group told me I first mount the location, but he didn't know how to do it.

Is it true and how do I do it?

You can learn how to mount - it will sure works. But I think this is an easier solution for you: Nautilus mount smb partitions at ~/.gvfs (where ~/ means /home/user_name/ - example: /home/desgua/.gvfs).
You just have to navigate to there:

Another option here, while not directly related to having mounted the directory in nautilus is to mount the location from the command line.

However, to mount samba volumes, you have to have CIFS support.

From here, you have the option of where you want to mount the location. There are TWO "standards" of sorts for this. If you want the location to show up in the Places menu, you would mount it in /media. If not, you would mount it in /mnt (only to follow the common namespace for mounted volumes. There’s nothing wrong with mounting the directory in /home/$user/mount/someshare) 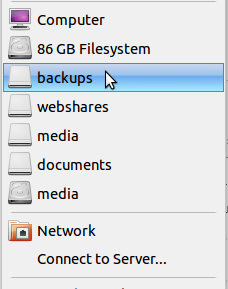 Illustration of the mounted location in the Places menu

assuming that /media/myshare exist, you would achieve this by issuing the following command:

You can accomplish this automagically by appending the following string to your /etc/fstab configuration:

Notice the noauto flag, this will keep the volume from being mounted at boot, so when you're no longer at your workplace, it won't hang during boot trying to poll and mount that share. 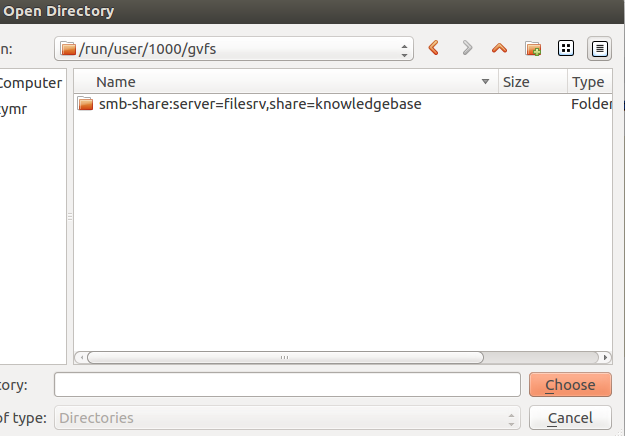 ~/.cache/ only contains a folder gvfs-burn

Follow this page. I followed it to get the same result as what you are looking for.

So, not sure if this is the real answer (please comment if in doubt or checked it yourself), but after some struggling together with another Linux colleague I've realised that I actually was not in the users group in my system (nano /etc/group). Upon adding myself to this group (sudo nano /etc/group, adding my name to the users line), I am now able to access the remote directories. My /etc/fstab file has these lines:

The rights on the folders look like this (ls -lh /mnt):

to find the mounted location. here (UID) is the UID of the account, which can be found by the command

This is my example of how to make a file link from terminal in Ubuntu.

Use double quotes "" to escape special characters such as spaces

1
Mount point of network shared folder
0
Mount point of Samba via Xfce
51
Where can I find the mount point for SMB shares in 13.04?
11
Nautilus' remote folder default mount point
10
Mount SMB share with gvfs from command line
2
Mercurial central repository at a Samba location
2
What is the UNC network path to a folder shared via Samba?
0
I have Ubuntu installed on my SSD. How do I get my HDD to work on Ubuntu?

6
Nautilus wants a password when I try connecting to a public Windows share
34
How do I access a mounted Windows share from the command line?
11
How can I create a samba share from the command line?
0
I managed to set up a samba file server, but have to use gksudo to add or remove files!
1
Make sure server can always boot and a hard drive is mounted before sharing with Samba
5
what is the command line equivalent to using nautilus to connect to a samba drive?
0
Find owner of a file in SMB mounted NAS storage
1
What is an easy way to browse samba shares on linux?