How to edit sshd_config remotely? A problem of incorrect permissions?

I am trying to remotely edit sshd_config file using WinSCP and putty. Unfortunately, I keep getting the following error-

“Cannot overwrite remote file Press delete to delete the file and create a new one”.

I tried deleting, but I got a similar error. I also tried changing the permissions on the file, but I got the error -

I suspect I don't have the correct permissions, but I'm not sure what to do. I've attached a pic of my permissions below. 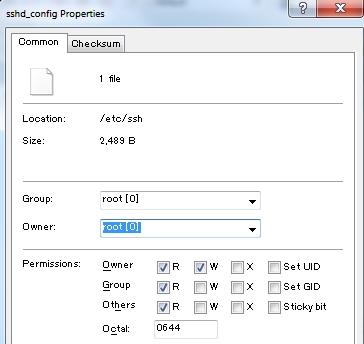 What do I need to do to be able to overwrite sshd_config ? Is it to do with my current permissions?

Editing config files on Windows and transfering them back to Linux is dangerous because Windows uses different line breaks than Linux.

You should rather edit the file directly on the remote machine by typing sudo nano /etc/ssh/sshd_config make your changes and press CTRL+O to save and CTRL+X to exit. This way you also don't have to care about permissions cause you are already root.

The answer actually turned out to be pretty obvious. I'm new to linux, so I was confused. When I logged into the server using the username and pw that I used to install the server, I was under the misunderstanding that this was the same as being root.

Anyway, I didn't have the correct permissions to edit the file, so to fix it I used Putty to ssh into the server then I created a new group called editors with the following code

then I added my user to that group

Next I gave the group editors ownership of the directory

After logging back into the server again with WinSCP I was able to edit the files in the directory.

This may not be the recommended way of going about this- if it isn't I'd appreciate someone letting me know :)

Not the answer you're looking for? Browse other questions tagged permissions remote-access putty sshd or ask your own question.

1
How do I remove permissions on an external drive in 13.04?
2
Cannot delete a tar.bz2 file from pendrive
1
Having issues creating a SOCKS5 Proxy. Can not Tunnel device
2
Need to remotely maintain the web server contents, permissions error
0
How to set file permissions on NTFS partition with Ubuntu?