How do I install WhatPulse?

I was expecting a .deb file but instead I got this: http://whatpulse.org/downloads/50/64bit/

It appears you clicked one of the download links marked Generic. That's understandable, since the site strangely uses the Ubuntu logo to represent the generic download.

You'll probably be best served to get the .deb package. These links are marked Debian. Ubuntu is based on Debian; both use .deb packages and most .deb packages for Debian will work reasonably well on Ubuntu. (Not all.) Usually if the only available .deb pakage for a program is for Debian rather than Ubuntu, it's worth trying to install using that. 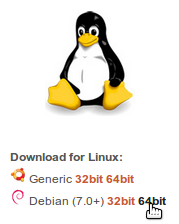 You should be able to install the software by double-clicking on the .deb file after downloading it. If not:

If you are told during installation that some dependencies were unsatisfied, then you can usually fix this by telling Ubuntu's package management system to automatically install them. To do this, open a Terminal window (if you don't have one open already) by pressing Ctrl+Alt+T and run these two commands, letting the first finish before running the second:

You may be prompted for your password; as above, no placeholder characters (like *) appear as you type it in, but that's no problem, just type it and press Enter.

Before following any advice in this answer, please check out the warning at the bottom. I don't put a generic disclaimer on my work; it speaks to the circumstances of this particular question and answer.

Why I Recommend Installing the Debian Package

Some people recommend against "cross-installation," the installation of software intended for one version of Ubuntu on another, or intended for another operating system (like Debian) that uses .deb packages on Ubuntu.

Of course the best thing to do is to get a package that it made for the version of Ubuntu you are running. If that doesn't exist, the best thing to do is to build the software from source yourself (assuming you don't make mistakes while doing so). Unfortunately that is not an option here; WhatPulse is closed source and the source code is not available (see below for details on that).

If you can't install a package meant for your version of Ubuntu and you can't install from source code, there are other options. WhatPulse provides precompiled binaries for manual installation and a system configuration script (see Wolfer's answer, and the Alternate Way section of this answer, below). Alternatively, you can install .deb packages advertised for a system other than yours, on your system; that's cross-installation.

Some people say it's best to avoid cross-installation even if there is no package built for your Ubuntu release and no source code that you can build yourself. This is a reasonable position, but I disagree. I think cross-installation is most likely your best option, in this particular situation. Here's why:

I don't recommend you use this way unless installing the Debian package as explained above doesn't work, or for some reason you don't want to do it that way. Furthermore, if the above way doesn't work, it might still be easier, or produce better results, for you to comment and/or edit your question to explain the problem (then you can get further help, specific to whatever problem occurs).

Most software distributed as a .tar.gz, .tar.bz2, or .tar.xz (there are some other variants) is source code that you have to compile. However, WhatPulse is proprietary "freeware" (gratis but not free as in freedom), and as is often the case for such software, its source code is not published.

The .tar.gz file for WhatPulse contains the actual executable binary, together with a script that installs it and a readme file. This is an archive (sort of like a .zip file on Windows), so you can double-click on it to view its contents, or right-click on it and click Extract Here.

First, read the readme file (README.txt), and take a look at the web page it points to. If the resources there--which are likely to be kept more up to date than this ansswer (though you or anyone may feel free to edit this answer to keep it up to date!)--conflict with the advice here, you should most likely do what it says (but use your judgment).

Move or copy the WhatPulse executable program (the file called just whatpulse) wherever you want it. There's no need to do this part in the Terminal, though you certainly an if you know how.

If you want to be able to launch it by typing whatpulse (in a Terminal, or in the Unity dash), it's best to put it somewhere in your executable search path. I recommend putting it in the bin folder inside your home folder. (If that folder doesn't exist, you can create it). If your bin folder did not exist before, you'll have to log out and back in (or reboot, if you prefer) for files in there to be automatically found when you try to run them

After all that, assuming everything worked, you should be able to run whatpulse from the Terminal or by pressing Alt+F2 (and typing it in, and pressing Enter or clicking on whatpulse if it comes up).

There is no need to run whatpulse itself with sudo. You should not do that (and it looks like it might not work if you do; it's not intended to be run that way).

I'm not sure if WhatPulse will give you the option of making it start up automatically when you run it. But if it doesn't, and if you want it to start automatically, see:

Finally, please note that I have not used WhatPulse, and am only vaguely familiar with it. This means two things.

What you linked is a standalone binary. According to my file:

Just extract it, mv it to wherever you want (as per *nix standard the /opt/ is for just this scenario), and if you want bash to recognize it ln -s it to /usr/local/bin/.

Not the answer you're looking for? Browse other questions tagged installation install-from-source or ask your own question.

585
How do I install a .tar.gz (or .tar.bz2) file?
396
How do I start applications automatically on login?
65
Is there a difference between free software and open source software?

1
How can I install a Canon Pixma MG2140 printer/scanner?
1
How to install gpt fdisk 8.4 in Kubuntu 12.04
1
Shank installation problem
4
How do I install Inventory Management Software?
2
Install Eclipse Classic 4.2.1 in ubuntu 10,04
2
Can't install linux headers
6
How to download a .tar.gz file from a redirected link in terminal?
1
How to install packages from Launchpad which are not in a PPA?