Command-line to switch between profiles in gnome-terminal

I created a new profile for gnome-terminal and I can switch between "Implicit" profile and the new created profile as you can see in the below image:

Now I wonder how can I switch between profiles using a command-line/script or maybe using a shortcut for this.

A lot of great answers already but I wanted to add one more variation using xdotool that does not require the menu bar to be visible...

The key combo shift+F10 will open a pop-up menu (the equivalent of right-clicking on terminal) and from there the profile can be changed.

e.g. xdotool key shift+F10 r 3 to get to the third profile

I've also found that this method does not require setting a delay for xdotool (which I found necessary for the menu bar method) so it's therefore a little faster.

I tend to change profiles a lot so I wrap this into a function:

so I can just call chp N to switch to the Nth profile.

Some more tips and idiosyncrasies of my setup:

To switch to the "implicit" profile:

To switch to the second profile:

is not installed by default in Ubuntu, so it must to be installed first.

Of course, for these commands can be added custom keyboard shortcuts.

There is no shortcut that allows you to change the profile within the terminal (without navigating the menus as you said in comments), without the use of the GUI. Quoting the manual (stable, development 3.9):

You can change the profile in your current Terminal tab or window by selecting a profile from Terminal ▸ Change Profile.

(You can propose this as suggestion in the bug tracker)

I was looking to do the same and finally got a script working, I put it up on my GitHub.

Like I explain in the README.md, it doesn't actually switch, but loads a profiles configuration into the Default profile. To do this, the configuration of each profile is saved to file on the first run of the script. The script makes it seem like you're switching between profiles, which is good enough for me. Hope it helps anyone...

Depending on your purpose, you may find this script to be useful: https://github.com/xyrix/gnome-terminal-profile-switcher

It does a sort of monkey patch and generates a new profile for each terminal, then sets some environment variables to expose a program for switching the theme of the profile for your current terminal.

Hopefully the example safe_ssh script will make things clear :-). I've been using it for just over a year now and it's helped me not destroy the company's live database ^_^

If you have a list of servers that you access often, I believe the easiest solution would be to simply invoke a second window just for that box's session.

First, make a separate gnome-terminal profile for each remote location that you use often. Then, in each profile, specify that the terminal should execute the SSH login command for that box, instead of a plain shell.

Finally, write a short script to kick off a new remote window given a profile ID.

Using this strategy you can "infinitely" vary the look of each box's terminal window, and kick them off from a single "control" terminal. For example, if we call this script "rlv", then we can spawn a remote window by simply invoking the script with a profile name.

If you ever fat-finger a host name, or neglect to set up a profile for that host, then you'll just get another default-profile window on the local box. There's a way to code the script to avoid this, by putting the login into the script itself, rather than in the gnome-terminal :

...but then you lose the flexibility of defining your login username for that box. That additional feature of the script I leave as an exercise to the reader.

I've just noticed that my original solution has been already rejected in the question. While there seems no simple way to change the profile, you can change background / foreground color by using setterm command.

So, this setterm -term linux -background black -foreground green would give you black background with green text. The only problem is that ls has colorized output, so you might wanna turn ls coloring off. Otherwise it resets to previous color scheme

Original post: There is a sort-of way around. From man gnome-terminal :

Here's example from my machine. I have three profiles: B&G(black on green), ForPrinting(black font, white background), and Default. So what I do is in current window type gnome-terminal --window-with-profile=ForPrinting . Then I can either kill old window from command line or switch and close it graphically.

B&G profile doesn't work. Probably because & is not a valid character, so keep that in mind when naming profiles.

It would be great of gnome-terminal offered a "next profile" command and shortcut; unfortunately, it does not.

A workaround for those with Alt+T disabled (Edit > Preferences > Enable mnemonics - unchecked) is: F10 left left down right and select the profile. Ouch.

Even though the question is about GNOME Terminal and the command line, it's worth knowing that MATE Terminal (a GNOME Terminal fork) allows profile switching via a simple keyboard shortcut.

The very ugly solution I've ended up using is

(This selects the second profile, but you could change that to say the htir profile by changing the second "key Down" command to xdotool key --delay 50 --repeat 2 Down.

Kind of extraordinary that the terminal itself doesn't doesn't allow configuration via the terminal!

This is a rather old post, but because it kept coming up while I was searching to solve this same issue, I thought I would post my solution.

This involves a small python script and remapping the CTRL+ALT+T button to run the script instead of simply launching the terminal.

Create a text file, I named mine terminal.py and make sure it is executible. Place the following code in it. This will open the terminal windows using all available profiles in sequence making sure that the one marked "default" is the first in the list.

Use the keyboard settings utility to assign a new shortcut to this script. For me I reassigned CTRL+ALT+T because that is the shortcut I am use to for opening a terminal window.

Be sure to create several profiles in your terminal. This script will make use of all of your profiles. So the more you create, the more variations on windows you can get access too. I have several that are all identical except for the background color. This helps me recognize them as I alt-tab through them. 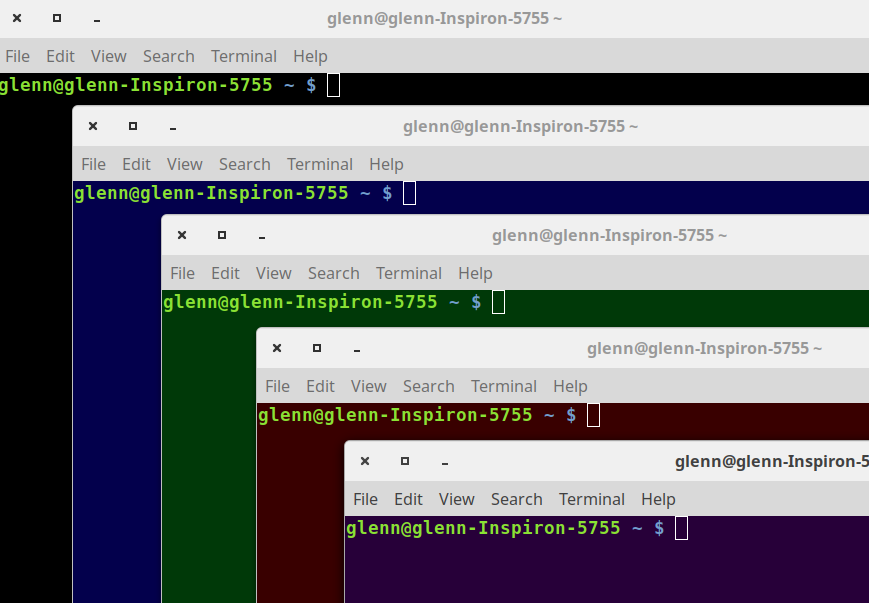 First the explanation, then the code.

I'm using some profiles from https://mayccoll.github.io/Gogh/ 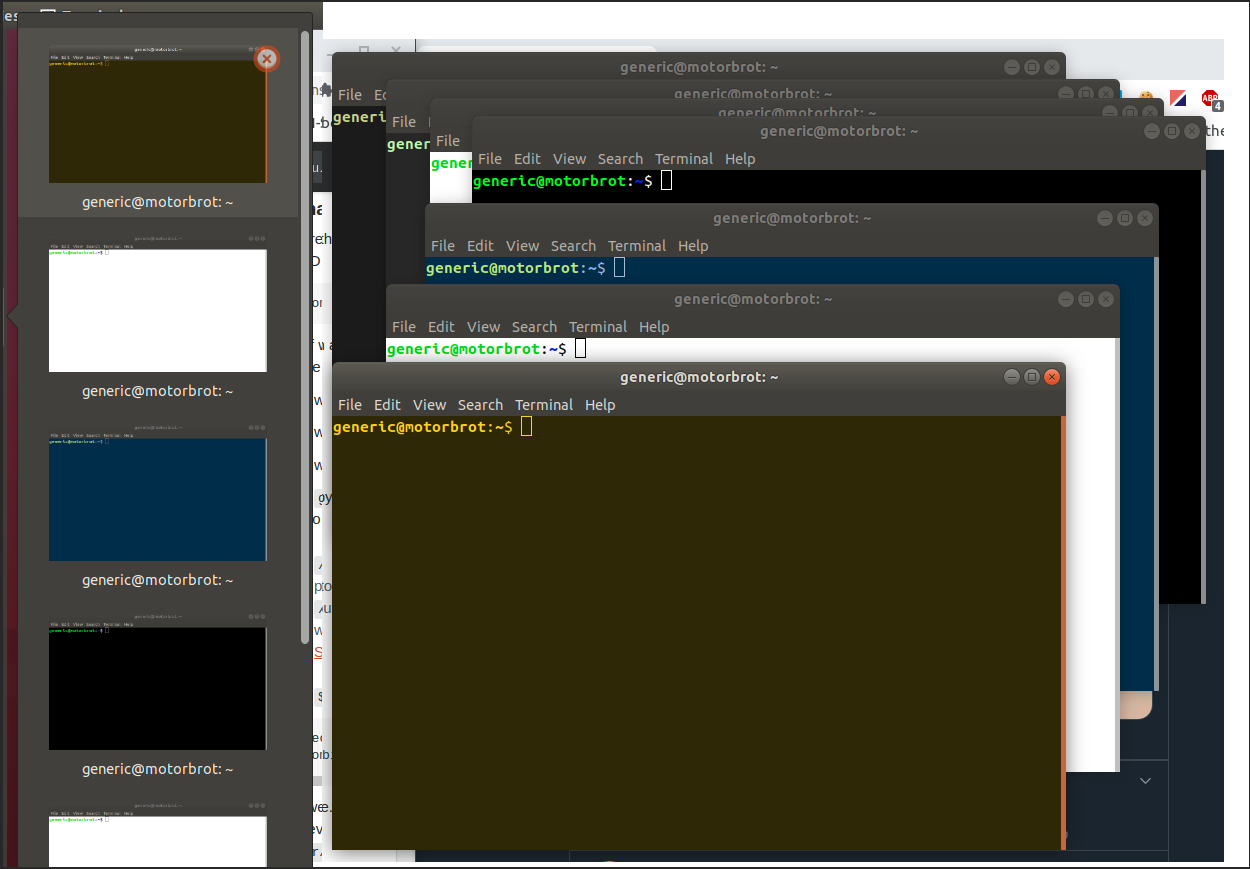 Maybe you could also use update-alternatives as a similar alternative approach. I have not tested that.

3
How to change the background of the terminal through a command
2
Change terminal or terminator profile via keybinding or echo command
1
Different terminal profiles for different directories/applications
0
How to activate a gnome terminal profile from the commandline?
156
How can I change what keys on my keyboard do? (How can I create custom keyboard commands/shortcuts?)
134
What exactly does `update-alternatives` do?
7
Keyboard shortcut for Gnome-Terminal profile change?
4
run virtualenv in new terminal tab automatically

22
Where are Gnome-Terminal profiles stored in the filesystem?
30
Cannot switch between windows of the same application
7
Keyboard shortcut for Gnome-Terminal profile change?
17
How to open new tab in existing window using keyboard shortcuts on Ubuntu
42
How to switch between tabs opened in gnome-terminal and also close any particular tab using shortcut key?
0
Cannot open gnome-terminal preferences window
6
How to disable the shortcut for New Profile in command line (Terminal)
0
KDE Konsole Shortcut to Launch New Tab with different profile
20
In KDE Plasma, how can I switch between virtual desktops using Meta + Tab?