Is there a way of leveling/compressing the sound system-wide?

As a Laptop user, I'm sure that a lot of people, even the ones using Netbooks would have already gone through this problem. Especially when listening to podcasts, and using it as an example, the sound might have loud moments and quiet moments, one person speaking loud and the other speaking very quiet in the same episode. Thereby, I always wanted the sound to be compressed system-wide, and I just noted the other day, that in Windows, some Realtek drivers already offer this function.

We have already a pulseaudio plugin for equalization system-wide, and although it still has problems like not letting us change its values and listen the change in real time, or cracking the sound while changing pulse volume, I do love it and use it. Now I'm just missing something to keep the sound around 0db (or near the volume level you're using) as a leveler plugin for pulseaudio.

I had success with the example shown in this answer.

This answer explains how to load the plugin permanently.

Due to a limitation of PulseAudio, it is not possible to adjust them in real time.

To experiment with different parameters, I also loaded the compressor as a real-time adjustable ALSA plugin via Alsaequal

by creating the following ~/.asoundrc:

while alsamixer -D compressor can be used to adjust parameters in real-time.

I recommend EasyEffects (formerly known as PulseEffects). It's an application, where you have lots of tools to manipulate sound system-wide (includes compressor). Pretty easy to use.

For me this setup works best in movies:

Pulse Effects can be installed from a PPA (Ubuntu >= 18.04) or as flatpak. I highly recommend trying the flatpak first because it is self-contained and doesn't mess with your system configuration, whereas the PPA version will install a backport of Pulse Audio 12 from 18.10 on 18.04.

If flatpak isn't installed on your system yet, install it with the following command in a terminal:

Alternatively, you can follow the official quick setup guide and install PulseEffects from its flathub page.

If the flatpak version doesn't work or you prefer to use the PPA, run the following commands in a terminal:

After installation, reboot your system.

These have been extremely helpful. Thank you for the inspiration. Although it is imperfect at the moment, I have a bit to contribute back. I looked in The Steve Harris Documentation to find that there are several flavors of the compressor, and I chose to use the stereo one. It did complicate using Pulse Audio Volume Control to place the compressor on multiple applications like Chrome and VLC, but I like the result. My motivation for using a compressor is to place a very strict lower and upper limit on volume. In order to not wake anyone in the house late at night, I didn't want to be constantly turning up the volume to hear the characters speaking in media, only to rush to turn it back down whenever superhero action happens or a commercial comes on. I followed the inspiration here and adjusted the values in realtime. Then I took my desired values and put them back into the sample code. In sum, the sample code I am contributing shamelessly borrows from the above example, but features the stereo compressor with a pretty strict upper and lower volume limit. Lastly, I put it into the form of a script. I hope this is useful to the community.

EasyEffects (which does require Pipewire however), which is a newer version of PulseEffects.

I think it's great software product! 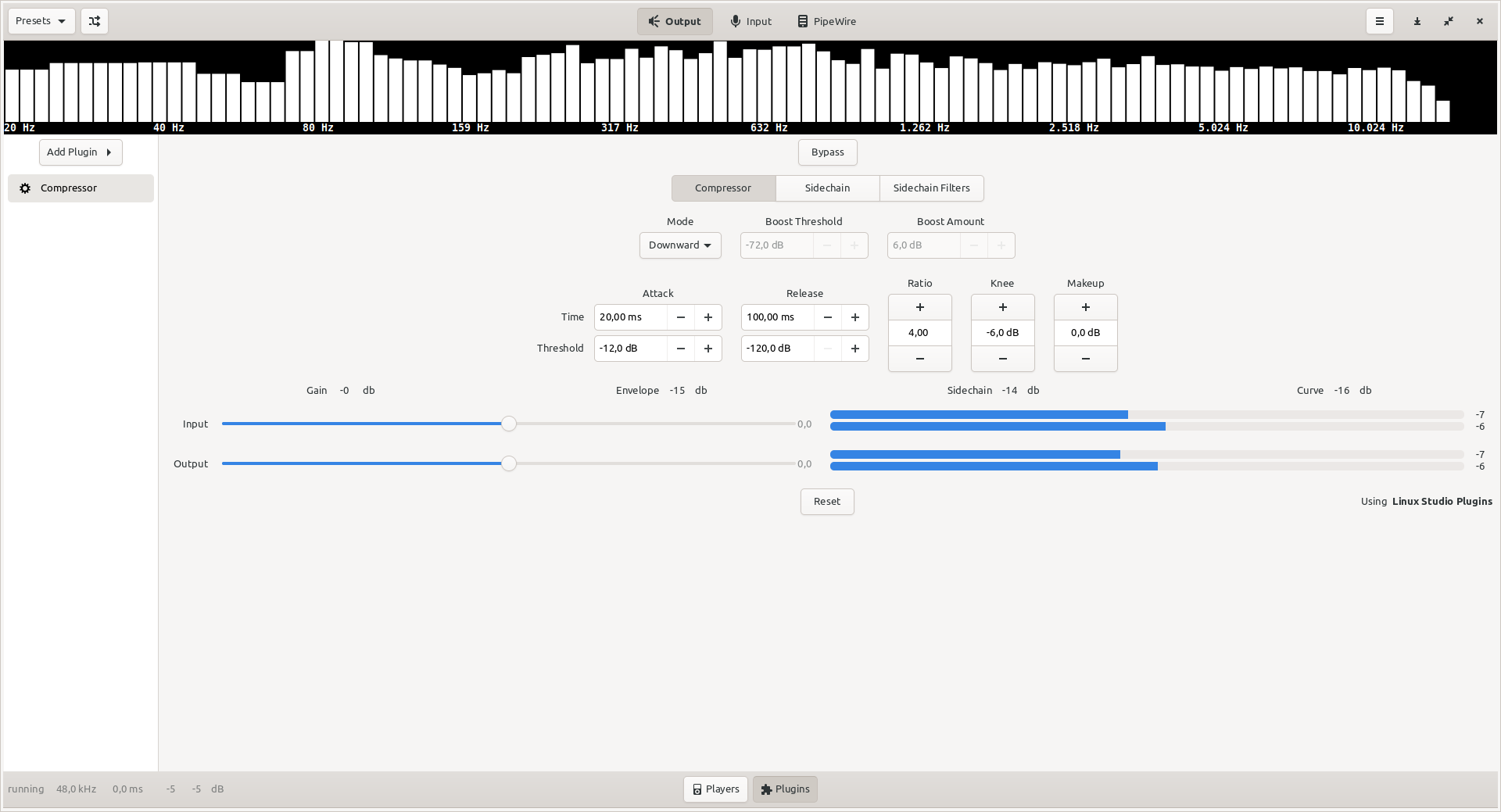 1
Sound normalization
195
Is there any Sound enhancers/equalizer?
61
Automatically adjust the volume based on content?
22
How can I apply a LADSPA plugin to a PulseAudio stream?
5
Automatically switch equalizer preset based on audio output (internal speaker or external)
4
Tweeter destroyed by ultra high volume. Any kind of protection?
2
Real-Time Volume Leveling & Audio Outputs
1
Cutoff max amplitude at a volume level

2
pulseaudio: Why is there no sound?
29
adjust max possible volume in pulseaudio
1
How can I force a gradual volume increase when any sound begins playback?
5
Maximum headphone volume very low on ubuntu 18.04
0
Problem with sound volume on 20.04 and B450 AORUS ELITE
1
Ubuntu sound too quiet or distorted if volume increased