What are the alternatives to Notepad++ on Ubuntu?

I use Notepad++ on Windows 7 and I want to know if there is a good substitution for it on Ubuntu.

I want something that is good for editing html files.

Actually you can install Notepad++ by installing wine first:

But some good alternatives are:

Of these, Geany and GEdit are my favorites, but it depends on your needs. If you are looking for something more complex, there is the Aptana Studio which I mentioned in detail as an answer in this question: Basic Web Development IDE/Editor like Dreamweaver?

Thanks to the work of Daniel Di Sardi there is an editor inspired to Notepad++ for Linux:

Notepadqq is a Notepad++-like editor for the Linux desktop. 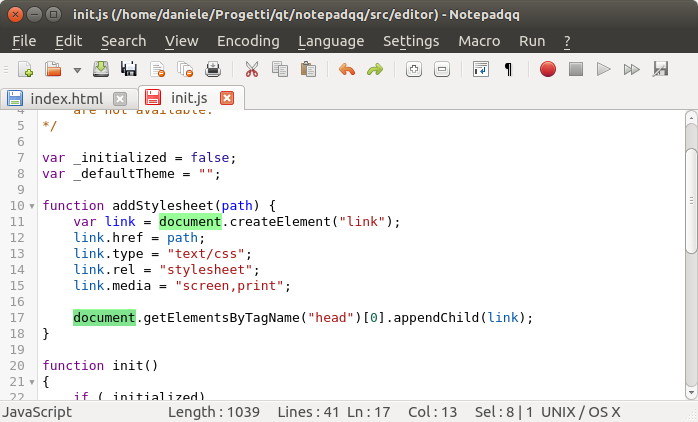 It has a nice PPA (the home page says it's for 14.04, but the launchpad has versions from Utopic to Xenial), so you can install easily by

As another option, SciTe is based on the same "editing building block" of Notepad++, Scintilla.

It is actually possible to install Notepad++ on Ubuntu. Just run the following commands:

Then, download the Notepad++ Windows installer, right click it, and select Open With -> Wine Windows Program Loader. Follow the typical installation process and you should be able to open Notepad++ from your Dash.

I would recommend Atom. Advantages:

Nowadays I would recommend Visual Studio Code. It's free, open-source and runs everywhere!

Visual Studio Code is a source code editor developed by Microsoft for Windows, Linux and macOS. It includes support for debugging, embedded Git control, syntax highlighting, intelligent code completion, snippets, and code refactoring. It is also customizable, so users can change the editor's theme, keyboard shortcuts, and preferences. It is free and open-source, although the official download is under a proprietary license.

Visual Studio Code is based on Electron, a framework which is used to deploy Node.js applications for the desktop running on the Blink layout engine. Although it uses the Electron framework, the software is not a fork of Atom, it is actually based on Visual Studio Online's editor (codename "Monaco").

Bluefish is very good for HTML and CSS in my opinion.

Other alternatives which have rich features including easy-to-use macro tools: 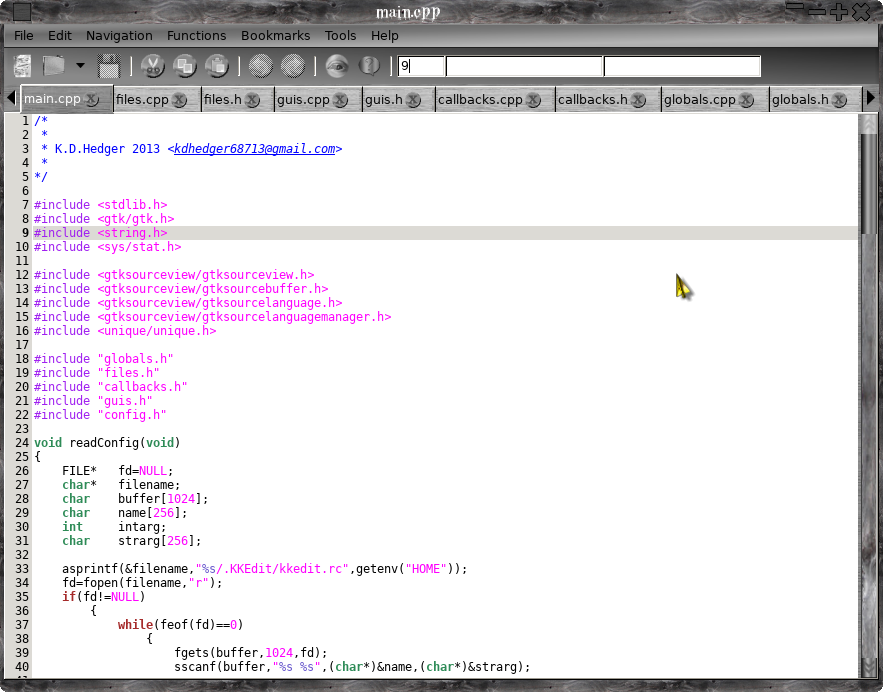 Did you try Atom? https://atom.io/

Or, did you try Sublime Text?? http://www.sublimetext.com/

Sublime is not free and sometimes when using it displays a notification to buy it. But, you can "evaluate it" as much as you want. (Sublime website says "There is currently no enforced time limit for the evaluation" )

Brackets is a modern, open source text editor that understands web design. It's crafted from the ground up for web designers and front-end developers.

It is available for many OSs and works pretty good with Ubuntu. To install Brackets in all currently supported versions of Ubuntu open the terminal and type: 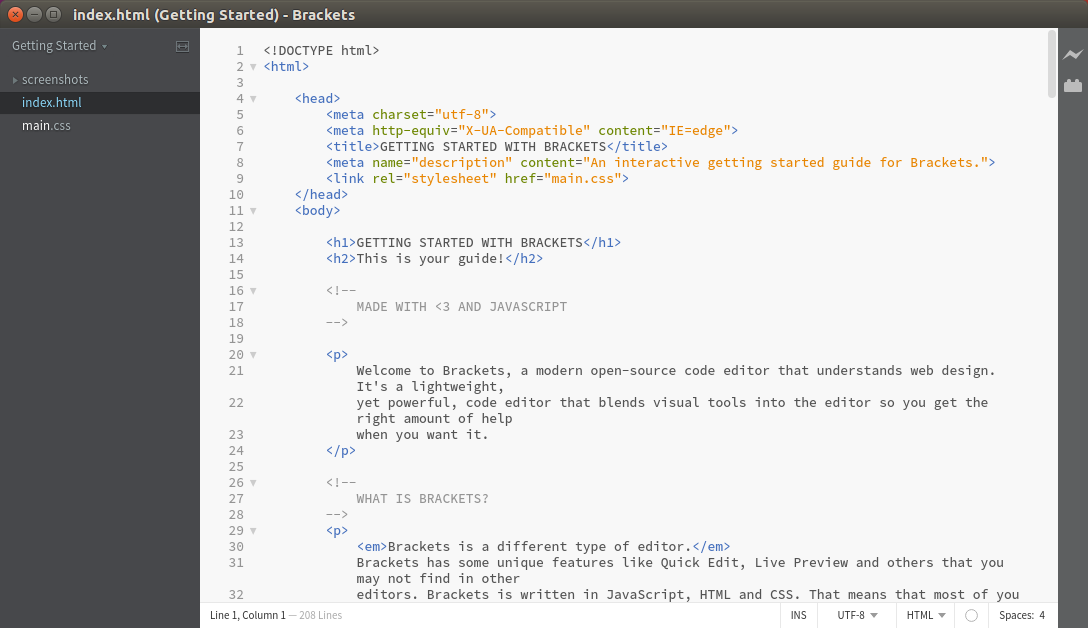 I've not been able to get notepad++ to work with wine/ubuntu. Nevertheless, you can install notepadd++ as a snap and it works just fine.

Notepad++ (notepad-plus-plus) is a snap package in the default repositories of all currently supported versions of Ubuntu. To install Notepad++ open the terminal and type:

To add Notepad++ navigation to other drives besides the default drive: 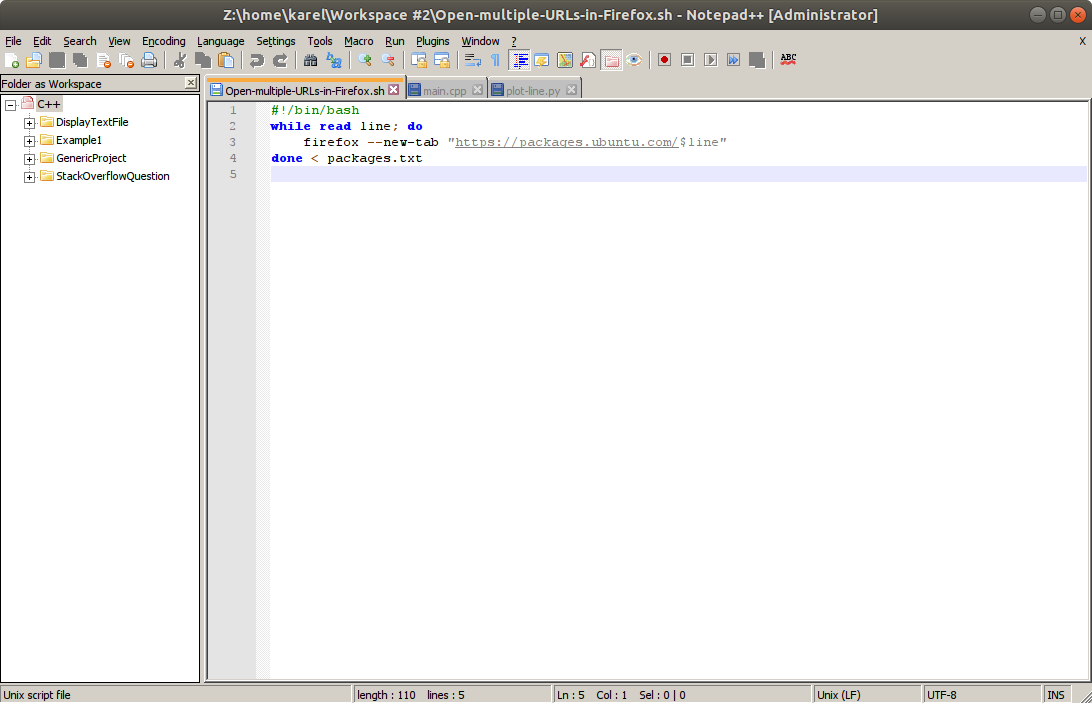 Have a look at scribes. Features:

I use both notepadd++ on windows and eric4 on Debian. Eric is superior in many ways to notepad++ in my opinion and is free.

Not the answer you're looking for? Browse other questions tagged software-recommendation text-editor or ask your own question.

6
What is the best editor for HTML, CSS etc?
2
Suggest an advanced text editor for Ubuntu
-1
Any good alternatives to Notepad++ for code editing in Lubuntu?
2
Does Notepad++ work on ubuntu?
0
Notepad++ alternatives for Ubuntu?
0
What text editor will not overload my Xubuntu 13.10?
0
Light-weight web development editor
51
Basic Web Development IDE/Editor like Dreamweaver?
2
Fonts in embedded wine
4
What editor provides highlighted and clickable hyperlinks? (similar to Notepad++)
see more linked questions…

16
What GPARTED alternatives are available?
12
Is there a text editor for the command line that uses the same keys as Notepad on Windows?
2
Is there any way to compile Notepad++ from source?
34
What alternatives are there to Fiddler debugging proxy?
4
Text editor that can wrap text in predefined HTML tags like Notepad++
13
How to make text file created in Ubuntu compatible with Windows Notepad?
2
Editor with caching like Notepad++ in windows
17
What editor can I use as a simple vi/vim alternative?
5
Notepad++ has problems with text autocompletion under Wine