For some projects I often type in a couple commands, like for example:

Seeing that I'm pretty lazy I try to avoid typing those commands in full again and again. So I can of course use the up-key a lot to find back those commands, but often, I also have so many commands in between, that searching for it takes even more time than just typing it.

I now wonder if there is some kind of utility that can suggest a full command which I use a lot, when I haven't typed all of it yet. So that I can for example type 'cd an/' and that it already suggests the rest of the path because I've used it so much the past month.

I did find something called Bash Smart Complete. But that is a little "dumb" in that it doesn't look at the commands I used before. I just also found this SO answer, which suggests putting the commands I use a lot in a file. That however, is not responsive enough in that I would need to create a new file for it every time I start new projects or change folders or program arguments.

[EDIT] Below are some really great answers. I haven marked any as a definite answer yet. Not because I do not like the answers, I do, but because none of them is an absolute winner. I think the Finalterm is a great project. Unfortunately it is still rather rough around the edges. For example; it doesn't support copy-paste yet. I would keep on eye on that project though, because when it will mature I think it'll be a great terminal app. As for the other answers; they either suggested creating an alias, which is not what I want to do because it creates extra work instead of taking work away, or using Ctrl+R, which is a brilliant (I didn't know about it!). A couple of people suggested using Ctrl+R, so I can't really highlight one answer over the other.

So for now I am definitely using Ctrl+R, and in the future I might use Finalterm.

Thanks for all the great answers guys!

If the commands are often used, they are recorded in the command history bash tracks in .bash_history.

Now the trick: You can reverse search this history to re-execute commands by pressing CTRL-r.

In inverse history search mode, bash shows, live, as you type, the most recent command in the history that start with your given input. Then press enter to accept and execute the proposed command. Keep pressing CTRL-R to cycle to older commands with the same prefix.

This is builtin in bash, no need for customizing scripts or install software :) It is one of the most useful features of bash, imho.

Paste (Ctrl-Shift-V) the following into a terminal screen:

Now you can just type the first couple of characters, then press Up or Down to scroll through the filtered list

There is this very promising Terminal App Called Final Term. Among its many features, it also has a history of remebering commands, so that you can then select it. Here are some more features: 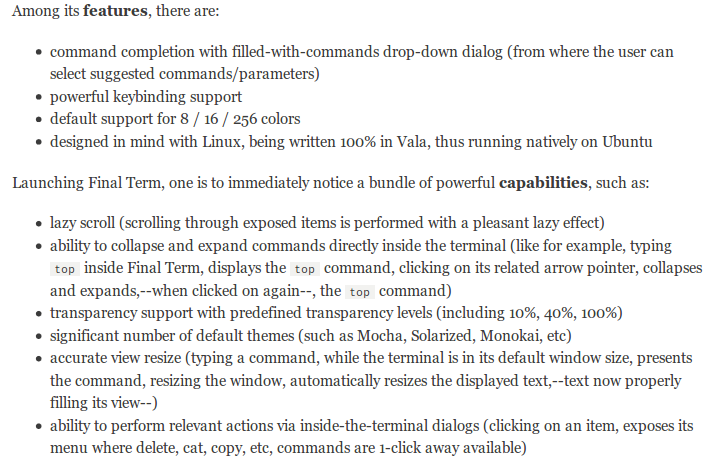 You can read more about it in this article.

Here is the the website from the creators. http://finalterm.org/

I have said that it is promising. The only issue is that it is at version 0.1. So some things like vim and nano don't work well yet. I have also noticed that it does not yet support Drag-and-Drop, and copy and paste. But it does have the feature you request. As the software matures, it will become one of the best terminals for the desktop.

Here is the function in action: 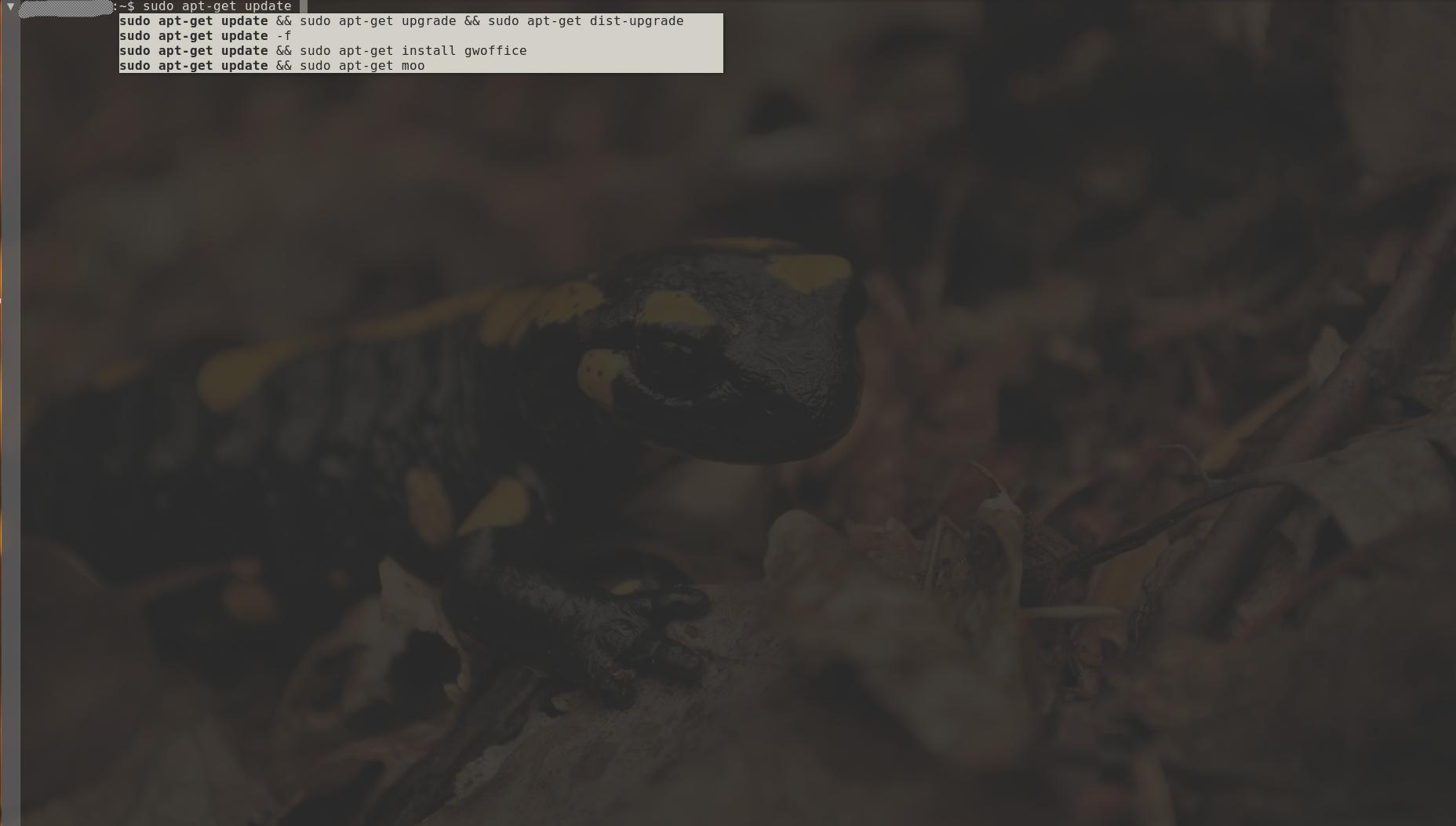 *I am on Saucy, so that is why I have a Salamander background :)

Use an alias for your whole command, or add the directory into your $PATH. Additionally, you don't have to change directories to where your executable (or script, or whatever) is to run it, so it's fairly simple. Both methods require you to restart the terminal you're using before the changes take effect.

Here's how to create a bash alias for your example (add the following line to your ~/.bashrc file):

This way, all you need to do is input runmyproject into terminal wherever you are, without having to specify options/arguments.

Alternatively, you could add your project path into your $PATH environment variable. To do so, add the following lines into your ~/.bashrc file:

In this case you'll still need to specify your options/arguments for your executable when running it.

When I find myself frequently having to change to a directory like this:

I would just do this once:

And from then on, use:

When it comes to:

I would use the bash history search. At the command prompt just press Ctrl-R and type 'runmy'. Voila, the whole command with all the options as it was last entered is right there to be re-entered. If I didn't like the options I used the last time and wanted to look at the earlier commands, I'd keep pressing Ctrl-R to cycle through all the previous commands that contained "runmy".

The Ctrl-R history search could help with the 'cd' command too, if you don't like the symlink idea. [Ctrl-R]/proj is really likely to bring back the last command you used to cd to that directory.

Rather than adding an alias or switching to a special shell, I always prefer to learn to use the bash features designed to help with this sort of thing. That way I can use the same features on remote machines or if I have to sit down at a colleague's terminal.

There are other ways listed here

I tend to use control R the most though

Try this... This works for all commands in your history file... is the same thing as Ctrl+R, but I think that is more intuitive :)

then try to write some command listed in history...

If you did everything right it should auto-complete your command...

146
Moving from bash to zsh
2
Why is top breaking history-search-backward in bash?
0
Is there a script we can use to directly view files without going to the respective path?

6
How can I uniqely record every new command I use, and possibly timestamp it?
2
Non-sudo user command line tools
23
What is sed and what is it used for?
15
How can I make a list with most used commands in terminal?
0
Difference between command-line commands regarding uninstalling Cairo-Dock?
0
When running commands with && how can I keep it running when one command fails?
1
How can I execute new commands while an existing command runs?
1
How to automate commands I use very often on VPS?
0
Ubuntu shortcut for getting last matching history command
0
question regarding command line syntax