I have a Windows host that runs guest Ubuntu VM via vmplayer. That virtual machine will be cloned, distributed among several people (running Windows hosts) and used for conducting a programming workshop. I am trying - and so far failing - to setup networking to satisfy the following requirements:

That works as far as connecting to the internet is concerned. However, I am unable to connect to the guest from the host at all. (E.g. ping Workshop does not work; if I use the address returned by ifconfig it does not work either from the host).

Now, I think I can use the bridged network connection option with DHCP and that will give me what I need in case of one VM (I did not try it in this case, but I remember doing it previously). However, in case of several VM's with the same hostname and their hosts connected to the same network that will be problematic, won't it?

Your solutions and other advice will be much appreciated.

First of all, yes, you won't be able to use a bridged network connection because all of the guests will have the same hostname, so you'll have to go with NAT.

You got part of the configuration right, however, your problem should be in the default gateway that you assigned to the guest. The default gateway, when using NAT, is not the IP of the host, it's the IP of a "virtual switch" that's connected to the NAT network. (The host VMnet8 adapter is merely another device connected to the network, to allow the host to communicate with the VM.) This virtual switch we're talking about gets the .2 IP in the subnet. So in your case, your /etc/network/interfaces should read:

If it doesn't work (highly unlikely), then you need to find out what the IP of the virtual switch is. What you can do is let the VM get an IP through DHCP (i.e. change it to iface eth0 inet dhcp like you had it before), and then do route -n. This should show you the default gateway it's using. Use that IP in your static configuration.

To be able to ping the guest VM using its hostname Workshop, here's what you can do. You need to add an entry in the hosts file in Windows, which is located in C:\Windows\System32\drivers\etc\hosts. Edit that file to include the following line in the end:

To edit that file under Windows however, you need to open it as an administrator in Notepad or Wordpad...and sometimes it doesn't even let you save it, so you'll need to take a copy of the file somewhere, edit it, remove the .txt extension if it got one, and go back and replace the original one, and "confirm" it...oh how I love Linux. But anyways, here's the line you need to add:

Once this is done, you should be able to ping Workshop successfully from your Windows host.

Though of course, to be able to deploy this in your workshop, you'll need to edit the hosts file in every single Windows host, unless you're also cloning the Windows machines.

Tip: since you're going to assign a static IP to your guest, make sure that the "NAT network" in VMplayer on all of your Windows hosts are using the subnet 172.241.0.0/16, because I think VMware randomly assigns a subnet to its virtual networks (VMnet1, 2, and so on), so VMnet8 might not be using the same subnet on another Windows host. If they're not, you'll need to manually give VMnet8 a subnet using the Virtual Network Editor in VMware.

Okay. After the comments, here's what you need to do:

If you want to use IPs from an altogether different network/pool other than 192.168.186.0/24, you'll need to go to Edit > Virtual Network Editor in VMware, find VMnet8, and change its DHCP settings at the very bottom to whatever network you want, and change the static IPs accordingly (the default gateway will always be the second usable IP, x.x.x.2). 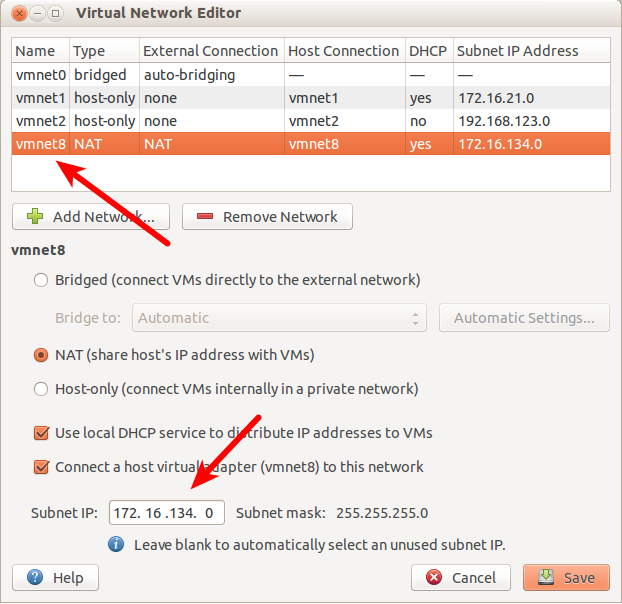 I was having similar issue, using VMWare Player running on Windows 7 with Ubuntu guests. But I was able to connect from host to guest and guest to host, however the problem was I was not able to connect to internet from the guest. After reading @Alaa answer I had to just make one more tweak to add the DNS server name to the interfaces file (dns-nameservers 192.168.150.2) and then everything fell in line.

Here is my configuration that worked.

Not the answer you're looking for? Browse other questions tagged networking nat vmware-player or ask your own question.