How to install NVIDIA driver in Ubuntu

All kernel-headers are installed in the system.

All of these failed. And I tested it everytime like this

Have been trying this the whole day, and done it quite a few times. None of them worked.

Need help! Is it the problem with kernel-3.9, that there are no updates for this ?

I found a very good tutorial online, and I was able to install those infamous Nvidia drivers on two computers without a problem. Here is what you do:

1) First, you need to open up a terminal shell. You can either start up your computer and go to a virtual shell

or login and open up the gnome terminal

2) Then In the terminal, run the following commands:

This command will refresh your packages

Then you will need to install the linux headers if those are not already installed.

Next, you will need to do a dist-upgrade, which upgrade some packages of your system

When that is all done, you will need to reboot your system

The Installation of the Drivers

1) Repeat step one to open the terminal.

You have one more step, or else, you will have a high chance that you just soft-bricked your system. For safe measures, run this final command:

*There was a well known bug that the Nvidia installation script did not run that command. If that config file is not created, your graphics will not work.

Congratulations! You should now be using Nvidia Drivers.

In the line that says Graphics, It should say your Graphics driver:

You can also click on graphics to get more details: 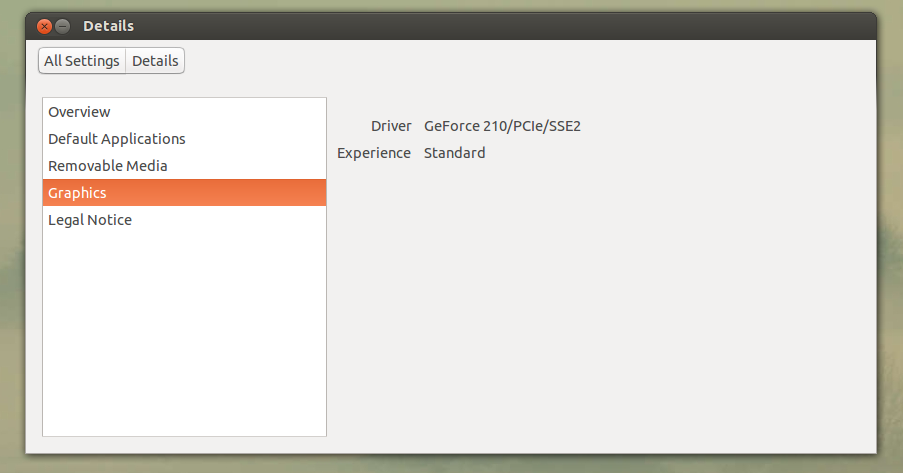 Though it seems like getting Nvidia driver installed in Ubuntu is a mess. It is not actually like that. All you need to do is follow the steps:

I noticed that you said 400m series. Usually these days laptops come with optimus technology. If you have optimus then you need to install bumblebee.

If you have 32-bit applications like Wine, and run 11.10 Oneiric or later, you will need extra libraries:

Allow yourself to use Bumblebee by adding yourself to the 'bumblebee' group. (replace $USER by your username)

Reboot or re-login to apply the group changes If you'd like to run a program on the nvidia card now, use the optirun program:

Since most of these answers are outdated... Here is modern way to install the nvidia drivers for Ubuntu (for 14.04 and newer):

All you need to do is:

so, from a terminal, run:

that's all there is to it!

This has worked for me few times when things go wrong:

Not the answer you're looking for? Browse other questions tagged drivers nvidia kernel xorg or ask your own question.

0
How do I update NVIDIA drivers on Ubuntu 14.04?
1
How to install drivers for Gefore 970M?
175
How do I install the Nvidia drivers?
32
How can I get nVidia CUDA or OpenCL working on a laptop with nVidia discrete card/Intel Integrated Graphics?
4
There is no Nvidia proprietary driver in Additional Drivers
2
How to install drivers for NVIDIA GT210?
-2
Installing motherboard drivers
0
Steam error > NVidia problem, fix = can't open xubuntu
2
NVIDIA 560 TI driver install ubuntu 14.04 leads to "missing on display" error
1
Can't get Diablo 3 to work on Ubuntu 14.04 LTS
See more linked questions