workspace switching via ctrl + alt + arrow not working after upgrade to 13.04, how to fix this? [duplicate]

So, my update to 13.04 didn't go very well. Due to the lack of a decent driver (Yes, i'm unlucky to have a legacy driver which doesn't play nice with the new Xorg.), I had to mess around with stuff to first troubleshoot and afterwards "fix" my system.

I've finally got unity back, but now CtrlAltarrow and CtrlAltShiftarrow don't work anymore. They are bound in "keyboard" > "shortcuts", but nothing happens when I try it. A strange thing is that other keyboard shortcuts, like ctrlaltt to show terminal are still working.

I noticed that CtrlAltarrow doesn't show in the list with "unity shortcuts" (the list that shows when you hold the super key).

Does anyone know how to re-enable this way of workspace switching?

I enabled workspaces in the appearance menu. It doesn't have any effect though. Switching via the workspace-switcher in the unity dash works fine though.

CCSM is installed, but I can't seem to find a way to add keyboard bindings there.

I had this same issue. I enabled workspace from Appearance → Behavior, and also tried using Ubuntu Tweak, but no go on the keyboard shortcuts, even though all the defaults were there.

I then opened CCSM to make sure that the Desktop Wall was enabled. In my case it wasn't, and as soon as I enabled it, my keyboard shortcuts started working again. 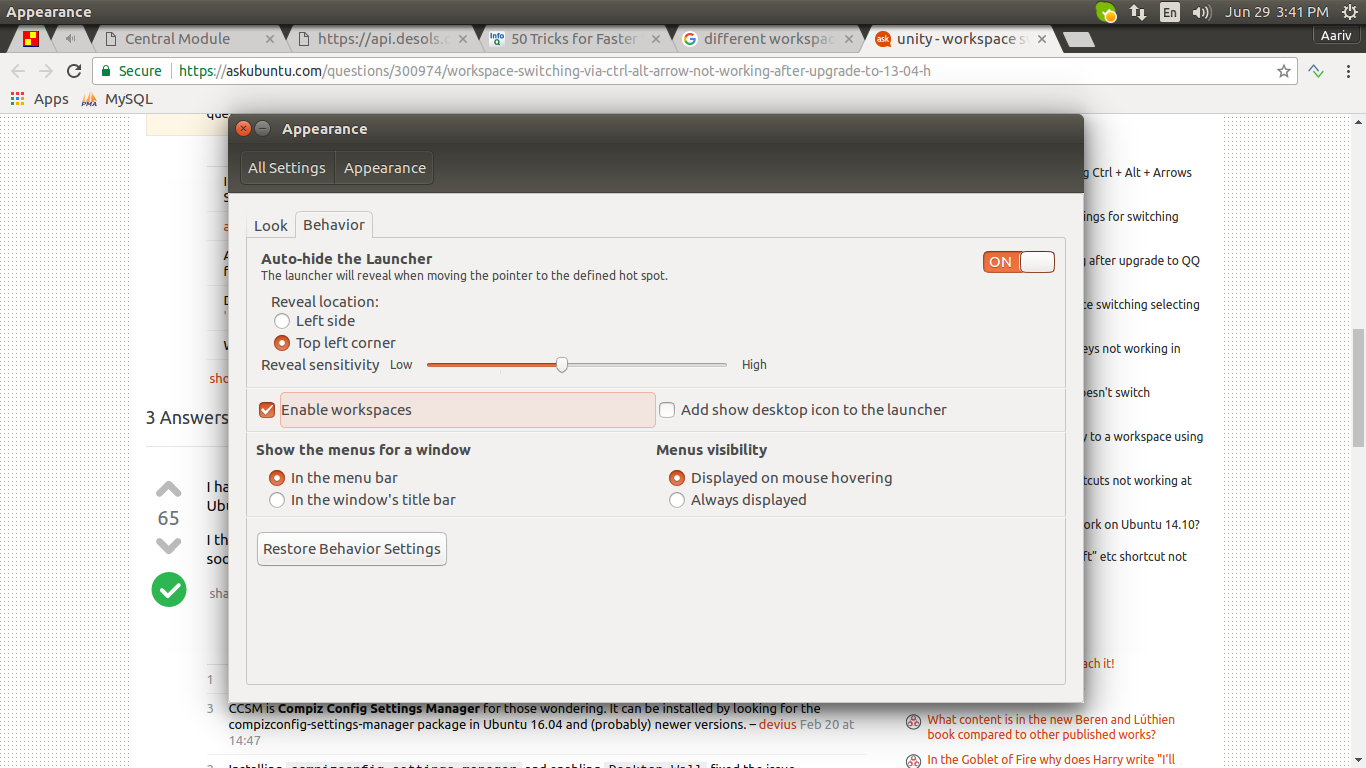 On my system, the same thing was happening. I found, by checking the Keyboard>Shortcuts>Navigation that it's not Ctrl + Alt + Arrow, you haveto press Ctrl + Alt + shift+arrow perhaps the C+S+A is being used bu another programme so conflicts.

On Ubuntu 13.04 workspace are disabled by default. To enable it open 'Appearance' from system settings > click to the 'Behavior' tab > check 'Enable workspace'. And also check the keyboard shortcuts in system setting>keyboard.

42
Where does Ubuntu store its keyboard shortcut configuration?
3
How do I get keyboard shortcut working for maximise in gnome-shell?
0
CCSM: How to add mouse-binding for moving a window within wall
6
Keyboard shortcut for switch to workspace 11 doesn't work
7
Ctrl+Alt+Arrow (switch workspace) won't work even if workspaces are enabled. Instead, it seems to have other effects in several programs
5
Using mouse button as part of a keyboard shortcut?