UPDATE: I found YNAB which runs very nice in wine too. (The upcoming version 5 appears to be web-based instead.)

I'm looking for something to replace my MS Money 2004 application.

Is there a similar tool that can import OFC files and that doesn't do double-entry accounting? Tax capability is not needed for me, I only do after-tax numbers. Some nice dashboard views (upcoming bills, future cash flow, total net worth) and some graphs would be a definite bonus!

Update: I'm in Austria (Europe!) so purely US-based tools like Mint aren't relevant. Also, I really DO mean OFC format, not OFX. I have to use whatever my bank offers, even if some say it's an old format.

I am the main developer of Skrooge and I would like to suggest you:

Open Financial Connectivity (OFC) is an obsolete file format for financial transaction information. It has since been replaced by OFX.

HomeBank is free software. Use it to manage your personal accounts. It is designed to easy to use. Analyse your finances in detail using powerful filtering tools and graphs. 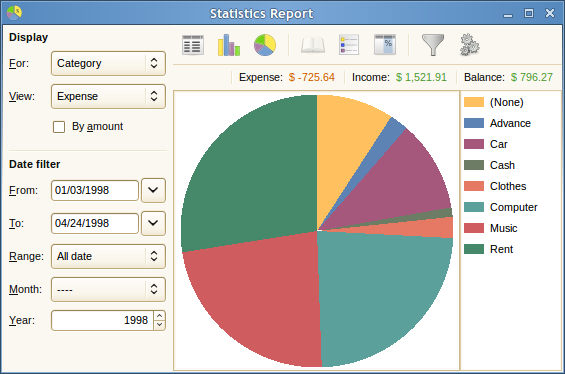 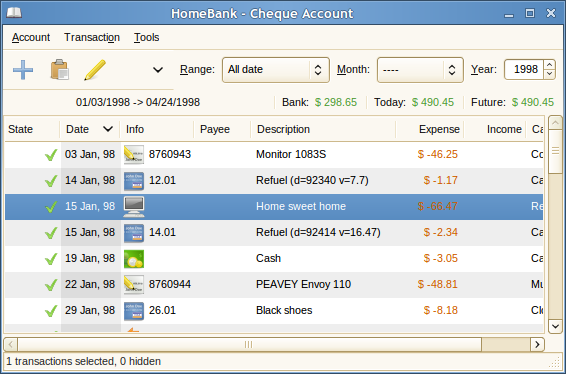 As said here, homebank is also a pretty good alternative.

I have had to find a similar application for my father, and I would suggest Skrooge

. We eventually settled on using MS Money anyway, since I managed to get 2005 working in wine (a bit too much work) and he could just open the old files we had to recover directly.

However I would highly suggest Skrooge otherwise, as you can do just about everything you do in MS Money in it. The interface is pretty straight forward, though if you are accustomed to MS Money you may need to unlearn it.

Here is the application's website: http://skrooge.org/ - and of course the customary screenshot: 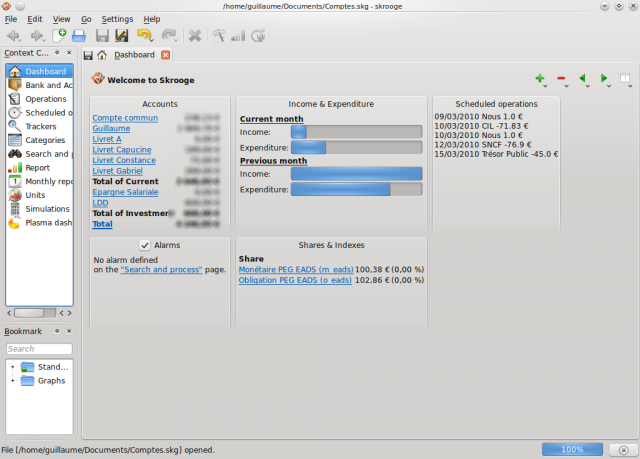 Since I don't think it imports OFC files, I would suggest using GNU Cash to import those files, then export to a format that Skrooge can import. Once you get things converted, you will find Skrooge is rather simple and satisfying to use ;)

I've had good luck with Moneydance, which seems to handle most formats and has most of the features you ask for (including OFC import, according to their support site). It's not free, but it's cross-platform and they have an excellent pricing scheme.

I ended up installing my copy of MS Money 2004 through Wine, and it was surprisingly simple!

The WineHQ database said to install ies4linux first, but the installation of that failed. MS Money could be installed without errors anyway, and it seems to work just as well as it did on Windows. So this looks like a winner.

There's also KMyMoney, which I use. You can import QIF files.

Not the answer you're looking for? Browse other questions tagged software-recommendation finance or ask your own question.

16
Which tool to use for "home banking"?