What should i choose? LXC vs OpenVZ [closed]

As an alternative to Virtualizing several Ubuntu Servers im looking into the possibility of using containers. But I am not sure if I should go for OpenVZ or LXC. Can anyone recommend one of them, or maybe list pros and cons?

virtualization lxc openvz
Share
Improve this question
asked May 22, 2013 at 16:56

Personally I find LXC is in rapid development and documentation lags.

I personally use openvz on "production servers" and do not think LXC is yet mature enough to use in "production".

I suggest you look at proxmox

Offers a Debian host, web interface, and KVM and openvz. They are planning to use LXC once they consider it stable. 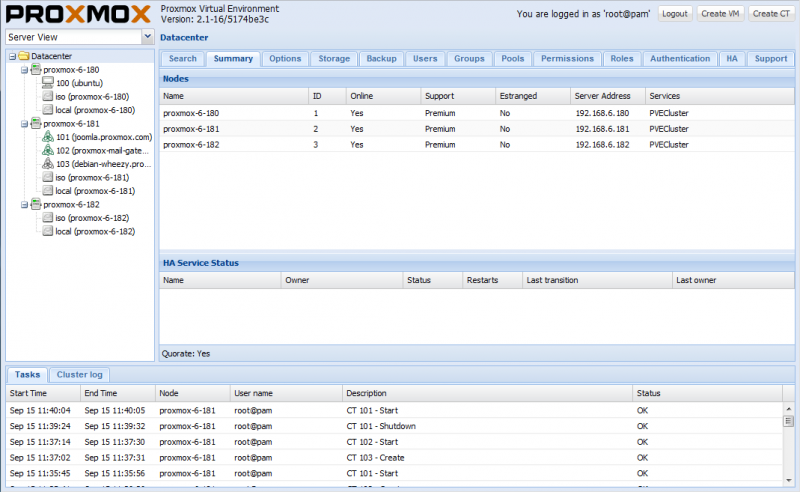 From what I can tell LXC has some advantages like being available on the Linux kernel (so you don't need a special kernel to use it). From the other side, OpenVZ supports live migration.

You will have to check the capabilities of each tool and see which ones are most important to you.

You can find here a short review of the capabilities of each own.

As of OpenVZ 4, you can run OpenVZ on a stock Linux 3.0 kernel. OpenVZ still benefits from it's own kernel; there are some OpenVZ kernel specific features.

I find it curious that there is all this sudden interest in LXC when the much more mature OpenVZ platform has been doing this very successfully for many years. LXC is actually a derivative of OpenVZ for the mainline kernel so it's not some new idea. Booting from different kernels has always been trival so I don't see why that would be an issue with using OpenVZ. I guess some people are not comfortable using a non-mainline kernel and maybe think newer things are sexier.

LXC will probably eventually replace OpenVZ....in 10 years. It's no where near ready yet. Not even for bleeding edge development unless you don't mind missing features, spotty documentation, lack of 'internet experience' (ie. built up knowledge base that is found by doing internet searches).

In another year or two when it is more feature complete and there is more of a knowledgebase it will probably be ready for some offline non-critical things. However, doing an internet search, people were saying that about it a year ago and it's still not there yet imho.

This is a 1 year old question, but in view of changes in the playing field I would add my 2 cents.

I would recommend that for containerization people should look at Docker. It is built on top of LXC (and other tools) and provides extensive tooling for container building, maintenance, distribution, and upgrade. As well, there is a fairly large community around it.

One notable difference is that Docker promotes "single-process containers" as opposed to the traditional use of LXC which is more of a light-weight fully fledged virtual machine. This requires some adjustment in thinking, but it has its benefits.

Not the answer you're looking for? Browse other questions tagged virtualization lxc openvz or ask your own question.

2
LXC PID namespace
3
LXC is returning an error when creating new unprivileged containers
3
Where is the configuration file of a lxc container?
1
lxc access to juju-local instances
4
lxc-ls doesn't list all containers
0
How to configure lxc container to have two ethernet devices - macvlan and bridge?
0
SNAPD automatic updates and sunning servers in LXC