How can I keep recent files from appearing in Unity?

The old "making .recently-used.xbel a folder" trick from 10.10 and older doesn't work any more.

Plus I'd prefer to turn off tracking only temporarily.

I also prefer not to use a separate user for this, as switching users sometimes isn't fast enough.

unity unity-dash zeitgeist
Share
Improve this question
edited May 3, 2017 at 21:02

In Ubuntu Precise Activity Log Manager 0.9 is included by default. It can be accessed from System Settings or just by looking for Privacy. 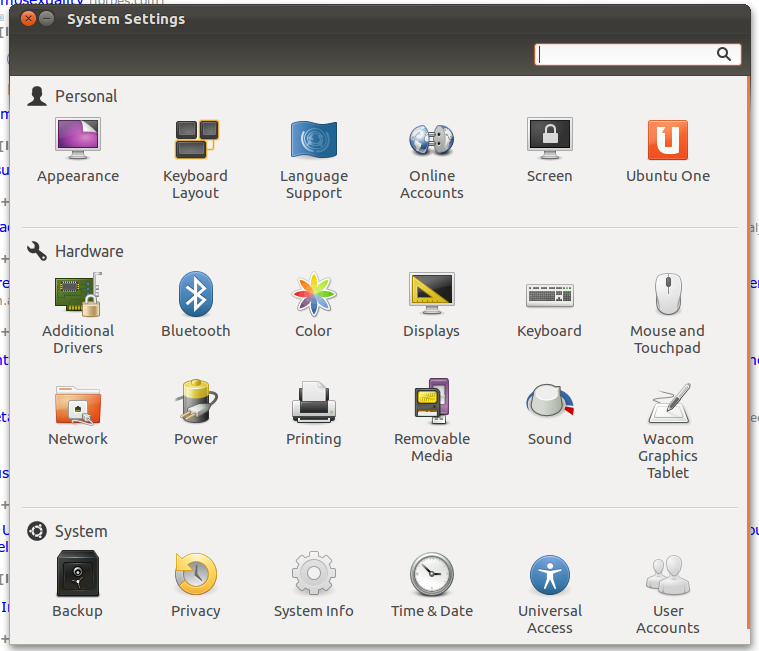 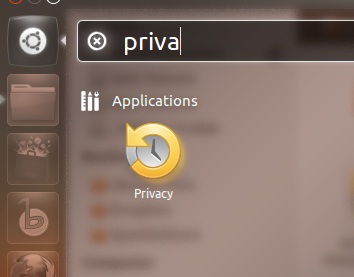 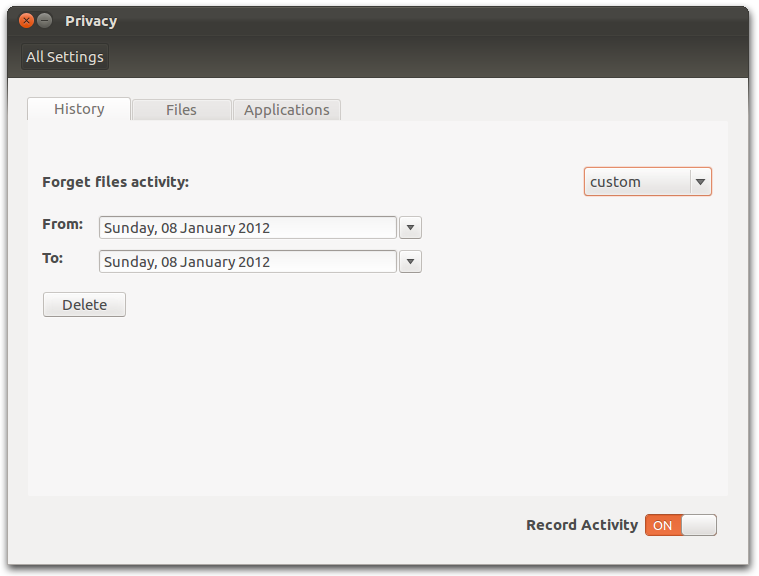 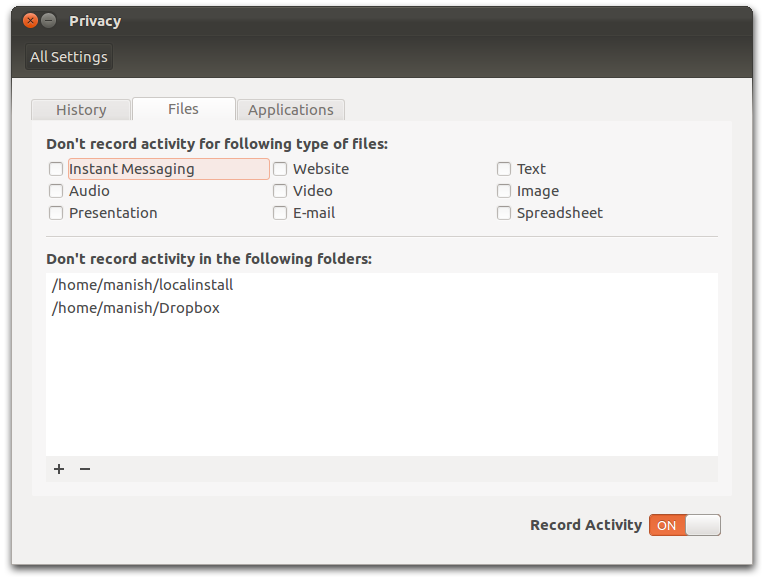 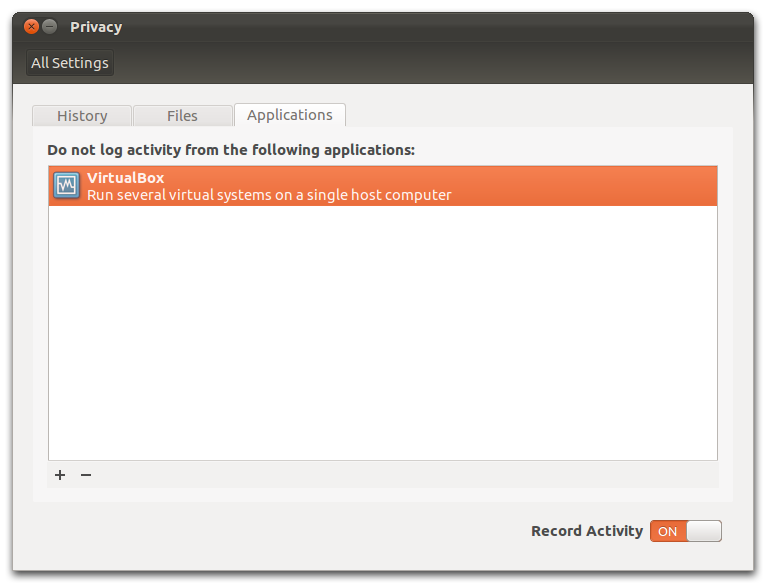 You can install Activity Log Manager from the Stable PPA.

For more details about Activity Log Manager you should check out the article on OMG! Ubuntu! and article on Webupd8 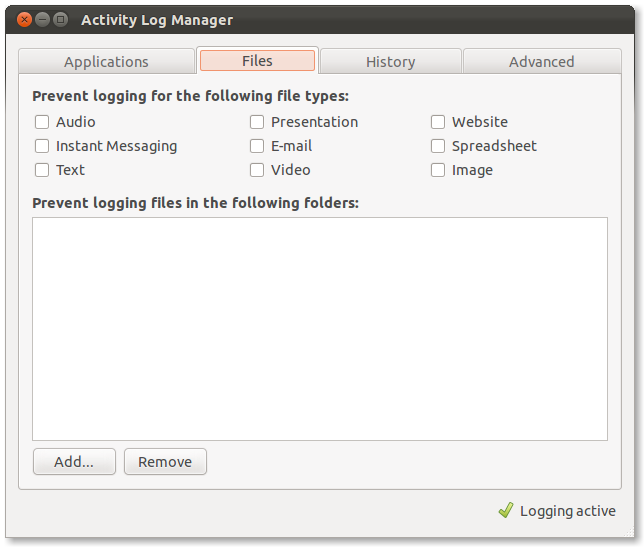 You can do it, provided that there is some pattern in the files. For example you have kept all your explicit content in folder /home/mrpig/erotica/ folder.

Then open Activity Journal which is a GUI frontend to Zeitgeist which acts as a Dashboard showing your recent activities. On top right Zeitgeist Icon, click it and Preferences. Check "Blacklist Manager" plugin

Then goto "BlackList Manager" tab. Click on New button, and then edit the new entry which comes as file:///home/mrpig/erotica/*

There is a way to do it, but it will clear all the other recent files as well.

All you have to do is run the following commands:

Edit zeitgiest/activity.sqlite no longer exists on my system:

It takes a moment, but it repopulates as the daemon starts.

Install it using the commands below:

Just rename the folder after browsing. After you renamed it, the files in there won't show up in unity recent files. Pretty easy solution, just make sure you don't forget it every time you use that folder :)

(Sry for my english)

The old "making .recently-used.xbel a folder" trick does work, but now the file is in ~/.local/share so:

Zeitgeist's developers are working on Zeitgeist Global Privacy. It will allow to remove part of Zeitgeist history (last hour, week, etc), blacklist an application or file type from the history and exclusion of a folder from the history. A few screenshots are provided in the linked blog post.

The answer pointing to the activity log manager is true for zeitgeist. But zeitgeist is not the only way the system keeps track of recently used files. Some applications still use the old method, where access to folders and files is written to a central log file located at ~/.local/share/recently-used.xbel. This older activity logger is called GtkRecentManager. You can read more about the interplay between zeitgeist and its older counterpart here.

In contrast to zeitgeist, there is no official GNOME tool for GtkRecentManager that would allow controlling what get's logged and what doesn't. However, as Bazon pointed out in a comment above there is a third-party solution which does the job quite well:

From the project page:

So, you keep running for GNOME to wipe your recent files list and, sooner or later, you decide that it'd be easier to just turn it off altogether and that you wouldn't really be losing anything in the process.

This tool takes a slightly different approach inspired by the HistoryBlock extension for Firefox. With this scrubber, you give it a list of places that you don't want to show up in your recent files list, then you get on with your life. (And it does its job discreetly.)

The scrubber will sit in the background, waiting for new files to appear in the list. If they match any of the entries in your blacklist, it kicks them back out. No fuss, no muss. You just set it and forget it.

The tool only offers a CLI interface but is comparatively easy to use. Instructions can be found on the project page and CLI help:

What I do is, I just rename the folder, add a _ at the end and it is gone from the list. But providing a Clear recent history windows should not be that difficult.

step 1. get the tools

( The ampersand '&' allows process to run in background. )

You can use sed to edit the recent history at ~/.local/share/recently-used.xbel.

For unity simply delete zeitgeist folder from .local/share/ and you will not see your recently used files again

Not the answer you're looking for? Browse other questions tagged unity unity-dash zeitgeist or ask your own question.

11
Hiding Files From Dash Search
4
How to remove a specific folder from the Ubuntu search?
3
How to remove specific entries found in Dash
2
How do I clear the list of recent files in Unity Files and Folders Lens?
66
How do I delete the entire history (Recently Used Items) in the dash?
58
How can I disable recent documents in Unity?
56
How to hide recent files and most used apps?
21
How do I delete totem's history?
31
Tips and Tricks for Unity
17
Hidden files are shown in Dash
See more linked questions

56
How to hide recent files and most used apps?
5
My Dash does not show recent applications. What can I do to fix that?
4
How can I prevent certain directories/files from appearing in Unity's dash?
11
Is there a way I can block a folder from Gnome and/or Unity search?
58
How can I disable recent documents in Unity?
4
"Recent Files" entries via command line apps?
2
How can I get local files to appear in unity lenses?
0
Files appearing twice in unity dash