How do I configure the screensaver in Ubuntu? I can see that gnome-screensaver is running.

Starting with 12.04, Ubuntu doesn't ship with any screensavers, just a black screen that appears when your system is idle. If you’d rather have screensavers, you can swap gnome-screensaver for XScreenSaver.

Screensavers were actually removed back in Ubuntu 11.10. Ubuntu uses gnome-screensaver and inherited the change from upstream GNOME. The GNOME developers think a black screen that puts your monitor into lower-power mode is optimal.

Open a terminal and run the following command to uninstall gnome-screensaver:

Install XScreenSaver and some additional screensaver packages with the following command:

After installation, perform a search in the Dash for Screensaver. Launch the Screensaver utility and use it to configure XScreenSaver and select your screensaver settings.

The Screensaver utility will prompt you to stop the gnome-screensaver process and launch the xscreensaver background process when you start it.

By default, XScreenSaver will choose a random screensaver each time it starts. You can specify the screensavers it chooses from or enable "Only One Screensaver" mode to always use your favorite screensaver. 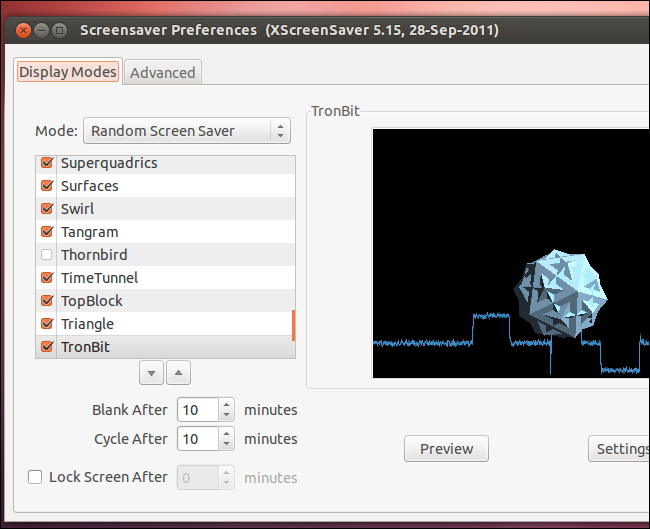 To actually use the screensavers, you'll want XScreenSaver to start in the background each time you log in. If it doesn’t start, it can’t notice your system is idle and launch screensavers.

Get started by launching the Startup Applications utility from the Dash. Add a startup program with the following command. The name and comment here can be anything you like: 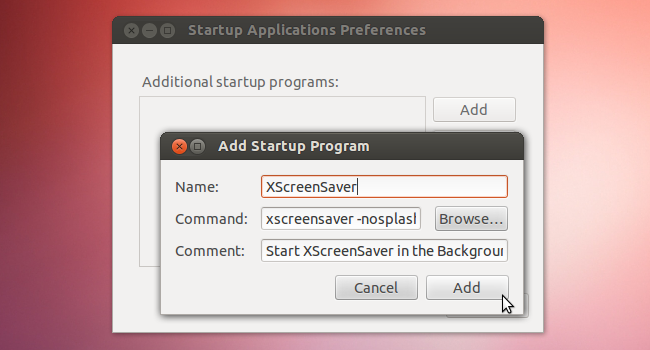 Reverting these changes is simple. Just run these commands to uninstall XScreenSaver and reinstall gnome-screensaver:

Source and more about: How to Add Screensavers to Ubuntu 12.04.

Radu's answer is a good one so I won't duplicate it. I will point out extra steps recommended by the xscxreensaver developer. I'm also including a short paragraph of history from the developer.

For the better part of a decade, GNOME shipped xscreensaver as-is, and everything just worked out of the box. In 2005, however, they decided to re-invent the wheel and ship their own replacement for the xscreensaver daemon called "gnome-screensaver", rather than improving xscreensaver and contributing their changes back. As a result, the "gnome-screensaver" program is insecure, bug-ridden, and missing many features of xscreensaver. You shouldn't use it.

I do not agree with the strong language of the developer but felt it better to include the history rather than hide it.

Many have complained when locking screen with Ctrl+Alt+L external monitors blank instantly and those with dpms are switched off. This causes unwanted delays when unlocking screen. Using xscreensaver will circumvent that particular problem.

You can decommission the Ctrl+Alt+L shortcut from gnome-screensaver and assign it to a new command for xscreensaver:

11
How to get conky work even in lock screen?
5
Lock screen when XScreenSaver is installed
4
How to use htop or other system monitor as screensaver
4
Is there an alternative lock-screen available?
3
Is there a tool that can automatically power off monitor on inactivity?
2
XScreenSaver Lock Screen
2
Ubuntu 16.04 lock screen without dimming/turning off
1
Use blank screensaver when on battery power
0
Upgrading XScreenSaver
1
Screen glitches or freezes after screen lock with Intel Video Driver
See more linked questions