I'm trying to install Ubuntu 12.04.2 LTS with Windows Installer. I downloaded this version from http://www.ubuntu.com/download/desktop/windows-installer and did as it says on instructions, all good until I reboot. When I reboot a message appear and I just can't continue the ubuntu instalation. I took a picture of the message: 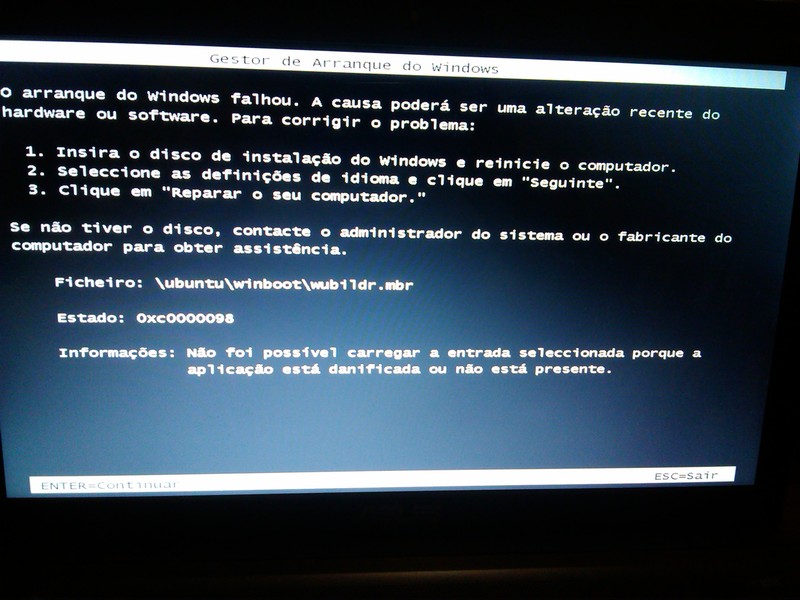 My computer is an Asus series K55V with cpu Intel i5 and I'm using Windows 7.

If you could help, I really don't know what's wrong.

The first thing you need to is fix the MBR so you can boot the computer again. This is very quick and simple if you have the right tool.

If you have the system recovery disks or a bootable Windows repair disk, you can follow the instructions in the screen shot to repair the system. If you don't have one of these, you can also use EasyBCD to fix the problem. (Look for the free edition for personal use at the bottom of that page.)

It's hard to say what went wrong with WUBI (the Windows installer). It is a good idea to do a complete defrag of your hard drive before trying again. There are free tools that are more full-featured than the Windows defrag, such as MyDefrag.

You might also consider doing a standard install of Ubuntu alongside Windows 7. In my opinion, a regular install is actually less likely to cause you problems than using WUBI, especially over the long-term. In addition, WUBI does not work with 13.04, which is being released on April 25th.

You can burn a LiveCD that lets you try Ubuntu without making changes to your machine and then use the LiveCD to install Ubuntu to a new partition on your hard drive.

In addition to defragging, MyDefrag lets you also move your files to the beginning of the Windows partition. This is a good thing to do before doing a standard install of Ubuntu. If the disk is heavily fragmented, this file consolidation may take a long time to run, but you can stop MyDefrag and restart it later if needed.

Not the answer you're looking for? Browse other questions tagged 12.04 installation windows-7 or ask your own question.

0
Installing onto a laptop after uninstalled with easybcd
1
Can't install Ubuntu on my Windows 7 laptop
3
Unable to clean intsall
1
Ubuntu won't boot on windows starter
2
Installation problem, not showing partitions
2
grub error: out of disk when booting 12.04 server with hardware RAID5 and gpt
1
Having trouble with corrupted disk images when installing 12.04.2 via flash drive
0
Ubuntu installing issue
0
Can't install ubuntu by USB or from Windows