I have been bashing my head against the wall, regretting ever having opted into using LVM. 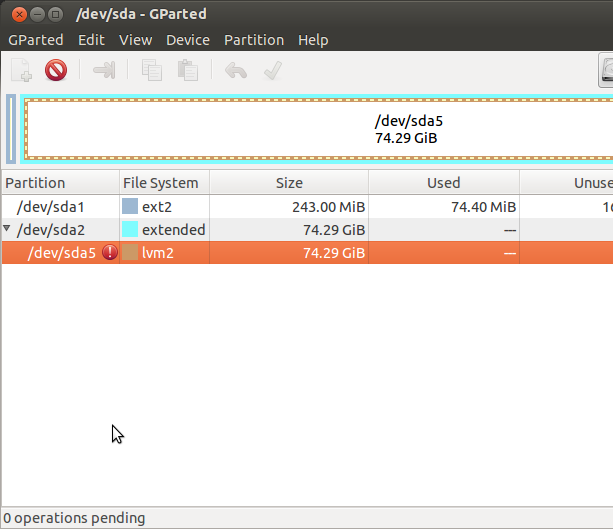 I first attempted to use GParted, but my version says it does not support LVM. I downloaded the latest .iso for GParted Live into a CD, but the results were similar.

So I have already taken all the steps to shrink the filesystem, volume group, physical volume, and so on.

I have even removed the swap_1 volume. When I run the latest GParted from the LiveCD, it does show the used 56GB volume group, then some 18GB unallocated space. However, it still does not let me resize /dev/sda5 or /dev/sda2. How can I resize /dev/sda2, given that the volume group and physical volumes are already 55GB, while is 18GB less than the size of the containing extended partition /dev/sd2?

Perhaps not the smartest solution:

use the tool system-config-lvm to migrate your data to another (temporal, external hard drive) device, delete the partition / do your resizing and migrate the data back.

I fixed this by accidentally deleting the /dev/sd2 extended partition (via 'parted'--I thought, like fdisk, parted would not commit the changes immediately).

I then used testdisk to look for lost partitions. It found /dev/sd5, and considered it a primary partition. (It did not find the extended partition /dev/sd2).

After this, I was able to use gparted to resize and do operations onto the partitions.

Not the answer you're looking for? Browse other questions tagged partitioning gparted lvm or ask your own question.

1
How to shrink LVM2-designated partition without recreating it?