Creating a .desktop file for a new application

I just installed the lastest version of UGENE. I works fine but in order to use it, I have to enter the following in the terminal: cd ugene-1.11.5/ then execute ./ugene -ui to launch UGENE GUI.

This takes too long. I would like to build a .desktop file for UGENE to be used in Ubuntu 12.04 so that I can simply open it from the unity launcher.

Not sure if this is helpful but the website says: By default ugene script launches the command-line version of UGENE.

Here's what I have (not sure if it's right):

I added the launcher named my Unipro UGENE to my unity bar and tried opening it but it doesn't appear. I must be missing something. I don't know what the StartWMCClass field is suppose to be nor do I know whether I entered the correct MimeType.

For reference see the Freedesktop Desktop Entry Specification, but this should work:

Instead of manually adding .desktop files, you can use the little GUI tool alacarte (Main Menu) to do this for you. 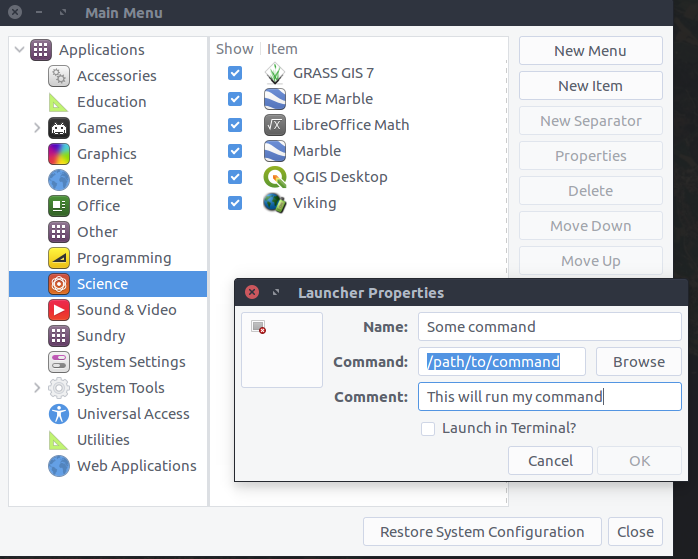 2
How to make custom shortcuts to open or create any app
1
how to create shortcut for an application?
0
How do I create icon launch for Firefox
1
How to make Dash recognise an AppImage as a runnable program?
0
Start own script via windows-key
138
How to add a shell script to launcher as shortcut
63
Why is there a /bin/echo and why would I want to use it?
9
How to create a shortcut for sh file?
4
Canon (MG 5350) scangear doesn't appear in dash
3
Installing software to specific locations?
See more linked questions