How can I install the Electrum bitcoin wallet?

I would like to install the Electrum Bitcoin Wallet on Ubuntu 12.10. The Linux instructions are located at http://electrum.org/download.html and say:

It seems the python interpreter is already included with Ubuntu. If I open a terminal and put in

So how do I install python PIP or are there any other ways to install Electrum?

UPDATE: I managed to install Python-Pip from this link (using Method # 2. I could not find "easy_install" from Method # 1)...

After that I could install ELECTRUM. Great so far !!

BUT, I presume that because I'm using the "Try Out" (not the "Install") version of UBUNTU from a DVD-R, then if I reboot the computer I would have to go through the same long-winded procedure again to install Python-Pip and then ELECTRUM.

So, is there any way of adding ELECTRUM (and presumably Python-Pip) to the UBUNTU DVD-R so I can carry the DVD-R anywhere and use any PC to run ELECTRUM?

I just tried it on 12.10, and it worked. Try running this: just press Ctrl+Alt+T on your keyboard to open Terminal. When it opens, run the commands below.

Then run the steps below in Terminal in the exact order: 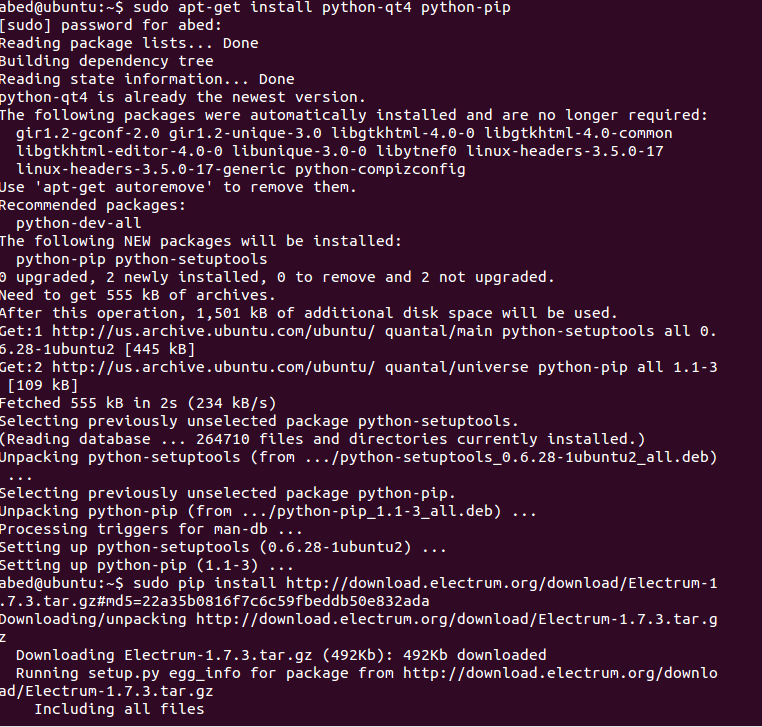 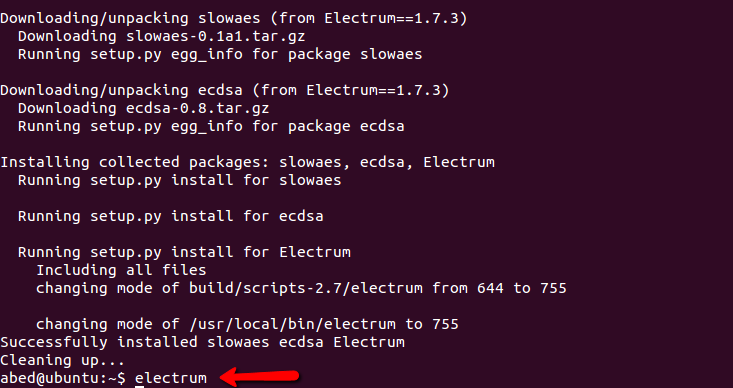 Once I ran electrum from terminal, I got a window that opened, and I clicked on create, and took me through the steps of creating a wallet.

You can install the snap from the store:

Or search for it in the software center.

Also go to the Electrum Website for more information.

Not the answer you're looking for? Browse other questions tagged software-installation python bitcoin or ask your own question.

53
How do I install Bitcoin in Ubuntu?
17
How to install Bitcoin mining software?
4
How to install GreenAddress Bitcoin Wallet in Ubuntu?
0
Why does Amazon give insecure directions for installing awscli?
3
Can I install exodus 'wallet' for ethereum & bitcoin on Ubuntu 16.04?
16
pip install gives “Command ”python setup.py egg_info“ failed with error code 1”
0
Create shortcut for electrum bitcoin wallet