How to understand nvidia-settings save configuration options?

After installing a proprietary driver for my nvidia graphics card

gksu nvidia-settings was run from terminal 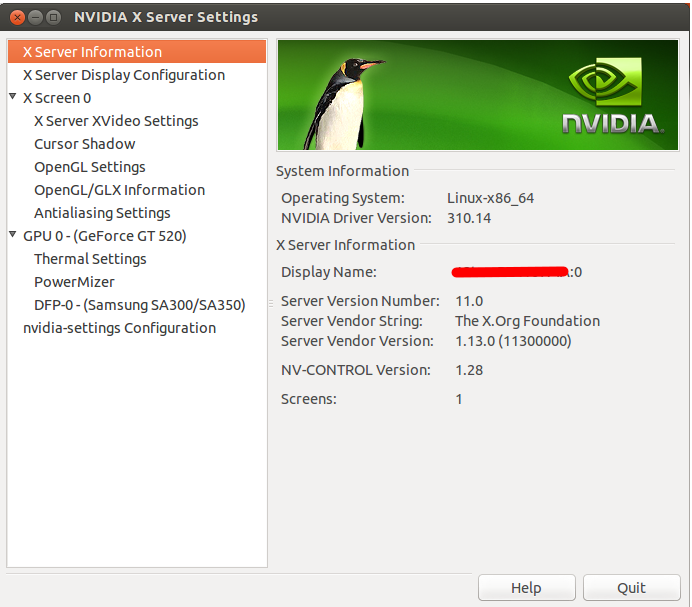 Through which have checked the configuration of my graphics card but am unsure where to save the configuration file after attempting to save it for system to use if for example I wanted to add a second monitor or make resolution changes.
Newer flavors do not use /etc/X11/xorg.conf and do not understand how to get the most out of my proprietary driver and graphics card. It appears nvidia-settings only confirms how the card is being used. Rather than its intended use of making configuration changes. Which appears to be uʍop ǝpısdn and/or ʍɹouƃ ʍɐʎ ɹonup to me.

First I want to mention that all information saved by nvidia-settings is stored in ~/.nvidia-settings-rc which you can access by typing the following:

I mention this because other users also wonder, if the xorg.conf is not used, then how is the settings for Ati or Nvidia working. The reason behind this is that X can now automatically detect and configure many aspects of what xorg.conf had before for many input/output devices, including Video cards. This did not completely happen automatically before, but since around 2010, X can handle many options and detect them without any problems or the need to configure a file for them.

Note that, many of this are still present but divided into more specific files in /usr/share/X11/xorg.conf.d/

Now, there are some cases, like specific Nvidia or Ati Models that need the xorg.conf to work correctly because of some variables they need that X detected incorrectly or are needed for the Nvidia/Ati card to work. The automatic detection is very good but still needs some work to cover, for example, the latest video cards.

For example, some video cards do not show the Unity Launcher or top panel unless xorg.conf is present. In other cases, users that want to tweak their video card, may need the Coolbits option which is added to xorg.conf. This are the reasons why nvidia-xconfig exists. To provide an additional level of support in case X does not detect or offer all the options for the video card.

I also want to add that if you happen to edit any of the options in the Display Configuration option you will most likely need to create or have an existing xorg.conf file. This can be created by the button mentioned in the following image: 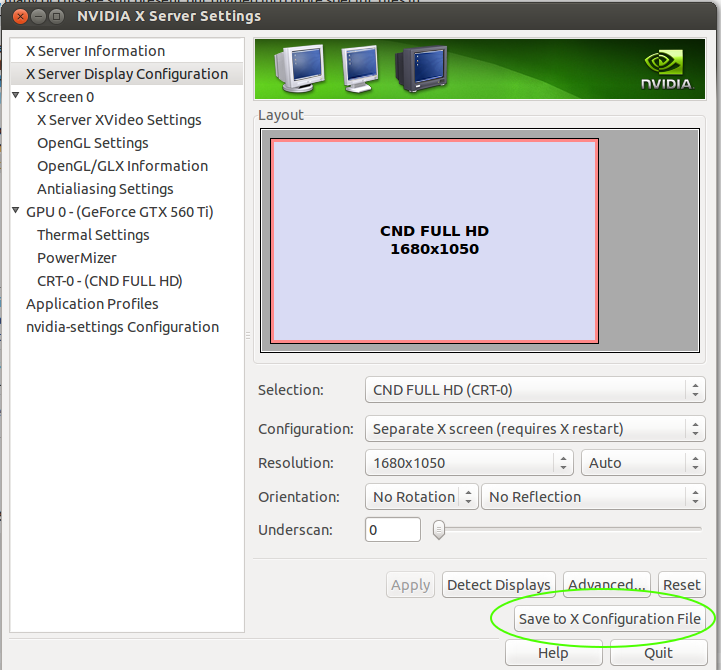 Or by executing the following command in the terminal (Recommended way):

Afterwards I also recommend rebooting the PC to make sure, the xorg.conf file is working correctly with the Nvidia card.

If however, you want to manually change the resolution, this is done in the xorg.conf file and not in the /usr/share/X11/xorg.conf.d/ folder.

This would then be done in the xorg.conf file in the Screen Section and it would look something similar to this:

Where you can see the monitor model, the Nvidia video card and resolution (Mode) used with it's respective refresh rate (75Hz).

Not the answer you're looking for? Browse other questions tagged drivers nvidia graphics xorg or ask your own question.

0
nvidia-settings not able to save my configuration
1
nvidia-setting not restoring settings properly after login
2
Dual-monitor nvidia xorg settings are reset after login
1
Ran nvidia-xconf as root, NVIDIA X-server settings utility still says I'm not using Nvidia X driver
0
NVIDIA graphics drivers options
3
How to install Nvidia driver for CUDA only in Ubuntu 16.04?
0
How to copy custom Xorg.conf settings automatically on each boot