Any app that tells me to take regular breaks from working?

Various health reports indicate that sitting for too long working on the computer is not good for health. I need an app that can tell me to take a break, for example once every hour of continuous work.

It would be optimal if it can automatically detect how long it has been since my display was last unlocked or logged in and count from that time. When I take a break, I will lock the display and unlock it when I'm back.

Is there any such app for Ubuntu which help the user take regular breaks?

WorkRave is probably what you want

Workrave is a program that assists in the recovery and prevention of Repetitive Strain Injury (RSI). The program frequently alerts you to take micro-pauses, rest breaks and restricts you to your daily limit.

You could use notify-send + crontab.

That's all. You will receive the notification Go take a break every hour. You can change the message to whatever you want.

It's not available in the main repos, but it does have a PPA (info from omgubuntu.co.uk):

I created a small application in Go language, Timer it has no dependencies at all, just put it in your $PATH and add it in auto startup, it'll show notifications per hour and also tell you to sleep if it is a weekday and post 11PM

BreakTimer is an alternative that I've recently made. It's pretty customizable and integrates well with most desktop environments. It's available on the ubuntu software store as a snap as well as other formats here.

As you suggested would be useful - it will intelligently restart break countdowns when you come back after having been away from your computer.

It's also free and open source, with all the source available on github - http://github.com/tom-james-watson/breaktimer-app.

If you use xfce (xubuntu) the Time Out plugin does this very well.

You may find Safe Eyes a sexy alternative to Workrave and other similar tools. 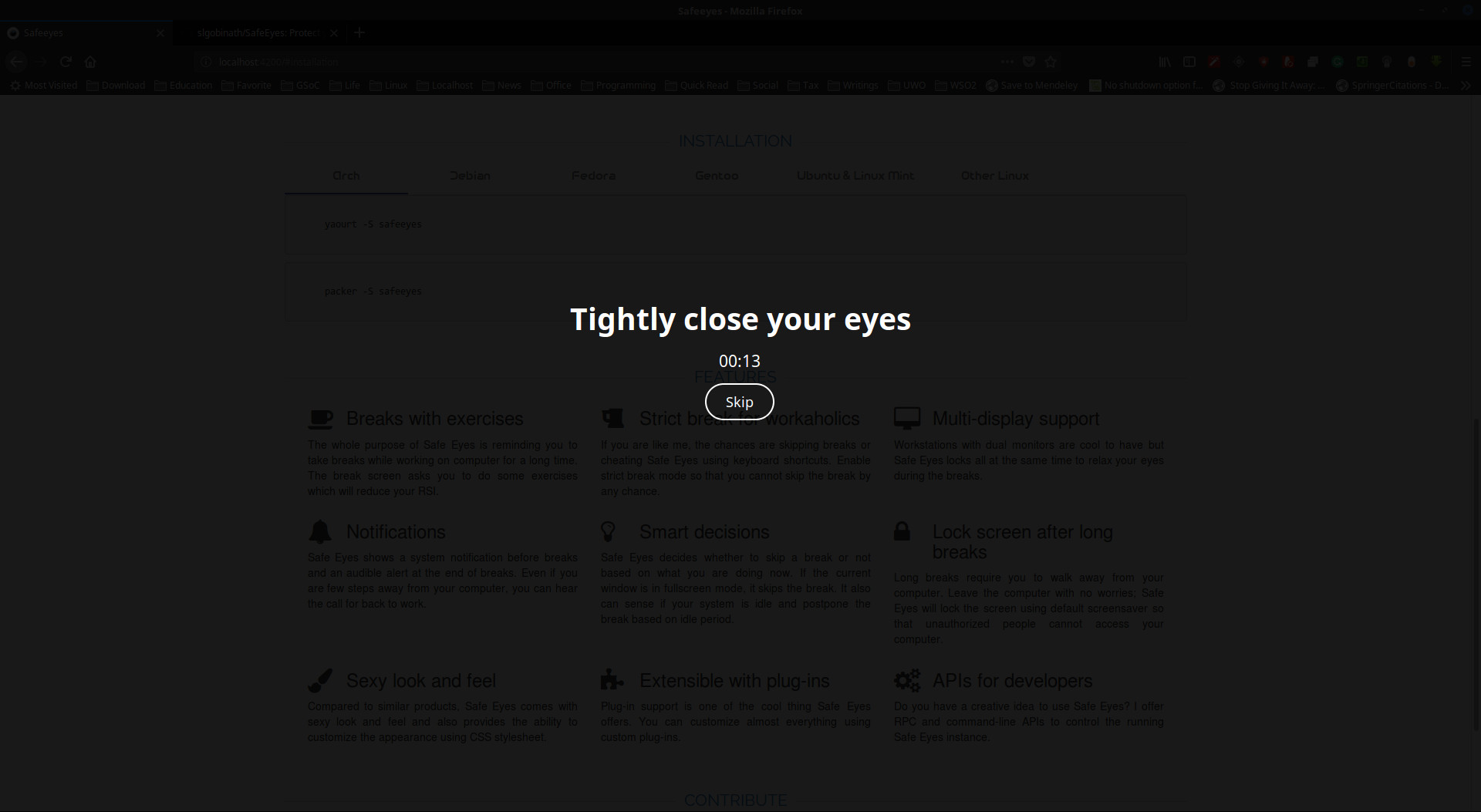 For more details, please check this AskUbuntu answer or the official website: http://slgobinath.github.io/SafeEyes/

Lock Screen Timer is a small bash script I wrote to solve this question in Ask Ubuntu: Application that will lock screen after a set amount of time for Ubuntu

To adapt for work rest periods the audible beep can be removed as it would be distracting:

Place a # on line to comment out the command.

The pop-up bubbles warning that screen will be locked can be changed from:

Another simple change would be to not to implement the spinning pizza in the systray as shown in the link's animated screen.

91
Is there a Pomodoro app available?
68
A timer that automatically locks the screen to take a break away from the computer?
55
Break Reminder for Ubuntu?
10
Application that will lock screen after a set amount of time for Ubuntu

1
Twitter app that supports real time updating
2
Focussed working, is there an app for that?
1
Is there any app like virtual drive of farstone?
3
any app or script to download wallpapers from different websites
5
Is there any Ubuntu twitter app that handles scheduled tweets?
2
Is there any application that will auto update hosts file from web?
68
A timer that automatically locks the screen to take a break away from the computer?