How do you make USB bootable on chromebook

I have a chromebook series 5. I want to install Ubuntu onto a USB stick. When I downloaded Ubuntu onto my USB stick, it won't start up.

Do I first have to download Ubuntu onto my chromebook hard drive, open Ubuntu and then make USB stick bootable? And then return back to chrome?

Or is there a way to download directly onto USB and make the stick bootable?

I appreciate any help.

How did you make the USB stick? Did you use UNetBootin? There's supposed to be something you can do with fdisk, but I'm too lazy to talk about that right now. (Don't worry, there's like a 90% chance someone else will add an answer detailing that method.)

I'd recommend this alternative method - it's a little more "hacker-ish" (you're basically tricking your computer into thinking the USB stick is a CD-ROM,) but it's the simplest method ever to make your bootable USB drive.

Okay, first off, we're going to enter Crosh - ChrOme SHell is what I think it stands for. Anyway, it's basically useless, except to open up the "real" Shell.
Press CTRL-ALT-T to open it up, then type shell and press Enter. You'll now be presented with a $ with (maybe) some text before it. If you see this, congrats. You're in. If not, reread the instructions and try again.

Once you've gotten the Shell open, type cd Downloads (assuming you saved the ISO to your Downloads folder.)
Now, we need to figure out what Device your USB stick is. It's usually /dev/sdb, if it's your computer's only USB stick plugged in, but it you're nervous, type fdisk -l - it'll reply with a bunch of tech stuff. Upload it to Pastebin, then post the link as a comment below my post.

(NOTE: THE FOLLOWING COMMAND WILL WIPE ANYTHING CURRENTLY ON THE USB DRIVE. IF YOU HAVE ANYTHING VALUABLE ON IT, PLEASE REMOVE IT BEFORE CONTINUING.)
Once you've figure out what your USB drive is, type:

(except, edit the *'s to complete the filename.)
This will "burn" the Ubuntu disk image to your USB stick, as if it were a CD. In fact, it basically turns the USB stick into a CD, albeit one that runs significantly faster than your average optical drive.

When it's finished, reboot your computer and spam F12 while it's booting up - it should ask you what you want to boot from. Choose USB CD-ROM or something similar. Ta-da, you have just booted from the USB stick! If that didn't work, reboot and try a different F# key or perhaps a different boot device. There's not really much to screw up here, unless you enter the BIOS settings and break something (but that's highly unlikely. ;)

Just remember that after you have done this to the USB stick, you can't use it as a USB stick until you reformat it. Normal Windows utilities can't do this, use something like Gparted instead. Create a new partition table (if it asks, use msdos,) and then create a new partition with the Type as FAT32.

You can install any iso file on a USB using Chromebook/ChromeOS.

There's an app called Chromebook Recovery Utility, which it's main purpose is to create a recovery of your chromebook on a USB.

But, it has the Use local image option that can install any iso file on a USB drive. See screencap below.

* In order for the iso to appear in the listed of available images, you'll need to rename the iso file to have the extension .bin. 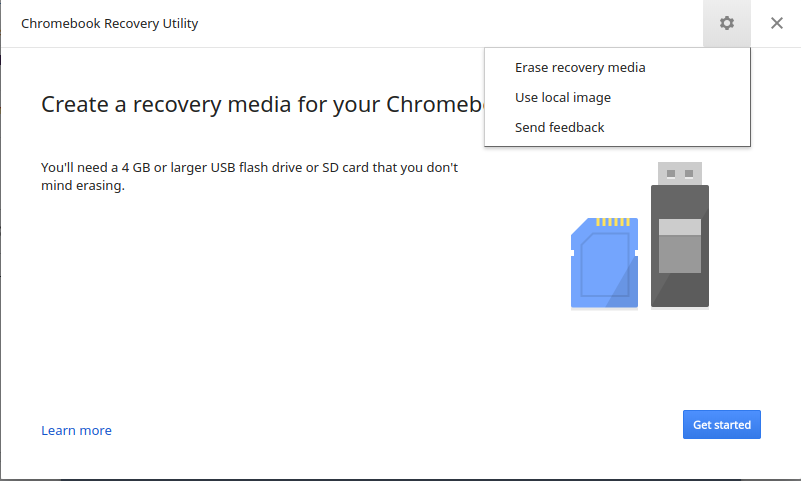 I had issues simply changing *.iso to *.bin--the Recovery Utility seemed to work, but the resulting USB wasn't always bootable.

Fortunately there is an easy fix:

I was able to create a bootable Xubuntu USB drive, among others.

Not the answer you're looking for? Browse other questions tagged chromebook or ask your own question.

0
How can I make Ubuntu my main OS on a Chromebook?
2
Ubuntu won't boot on my chromebook after install
1
Ubuntu xfce need more disk space (Chromebook)
2
Can you create an bootable Ubuntu portable USB drive for a Windows PC using a Chromebook?