I finished configuring OpenVPN on my OpenVZ vps. When I run service openvpn restart I get the following error output:

I have a gut feeling that it is something to do with the fact that an OpenVZ machine does not have an eth0 device but a venet0:0 interface instead. I looked through all the config files I had to edit and made sure there was no reference to eth0 though. I configured it to this tutorial that I am finishing up (will be finished once I have the solution from here).

Please let me know how I need to change my configuration so that OpenVPN can start successfully.

It turns out that you have to set up the tun/tap device on the openvz host. To do this you need to make sure the host is running with lsmod | grep tun. If nothing appears then run modprobe tun before running lsmod | grep tun to check it appears. Now that that is done you need to give the container access with the following commands (I suggest putting this in a script and then calling that):

I got a warning error message shown below, but restarting openVPN on the client now seemed to work. 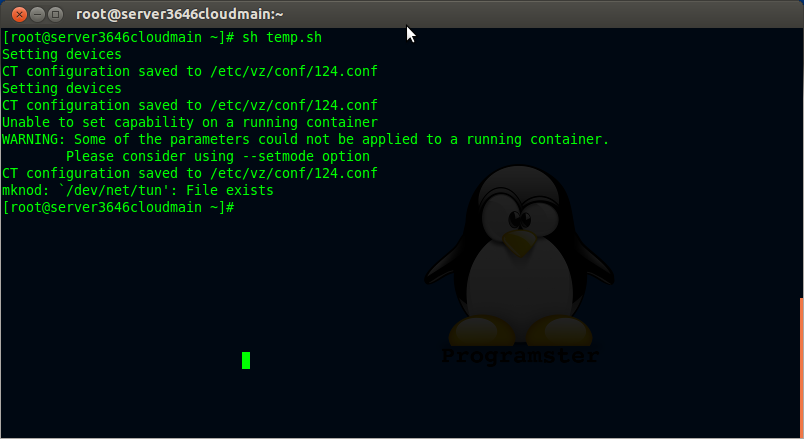 Also, after having done this, I was able to connect successfully but couldn't connect to anything else. I spent ages checking all iptables and packet forwarding, but the error was actually that I had left the client.conf in the /etc/openvz directory. Removing that and restarting the openvpn service fixed this issue.

Not the answer you're looking for? Browse other questions tagged 12.04 networking openvpn openvz or ask your own question.