I'm trying to create a command that will open 3 services from the Rails stack, rails s, spork, and autotest. I can run these commands individually by opening 3 terminals, going to the app folder and running them. I can even open 3 new tabs and run the commands on each.

The problem is that they fail when I try to open the tabs via gnome-terminal like so:

Error (for spork and autotest):

Surprisingly it does work for 'rails s' (the tab shows the server running).

Invoking gnome-terminal three times and stringing the commands together with && won't work, and the tabs won't appear in the same terminal, and indeed you will have to quit the first terminal for the next to appear.

The way to make sure all your tabs open in one instance of gnome-terminal all at the same time is to use the --tab-with-profile=PROFILENAME switch. In the command below you can leave the first command as gnome-terminal --tab as that it is the first window to be generated; now all you need to know is which profile you are using and you can use --tab-with-profile=YourProfile to invoke the other commands and they will all appear at once in the original terminal opened.

Here is your command modified:

(For future readers: substitute the program names given after -e to test out the command line given here; remember your targets for -e must be installed and in $PATH; for things not in $PATH use an absolute path such as, for example, /opt/mike/program) 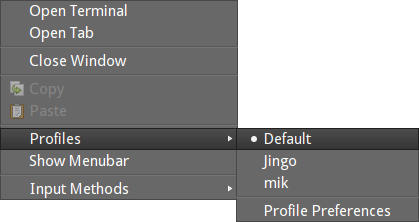 Go to Profile preferences for more information and to check the name of the profile.

If you have trouble launching your programs with gnome-terminal, either add the location to $PATH, or make a symlink and place it in a $PATH location, or (what was very useful here): create a simple bash wrapper script and call that in the gnome-terminal command line above. (You must call it with an absolute path: i.e. /location/of/script and not just the name of it.)

Then name the script, make it executable and call it in the gnome-terminal command line above. Do this for all the non repo programs that are problematic.

Below is an answer from stackoverflow.com

this code open new tab in terminal running a python script and when its over, this new tab will not close, because i added 'bash' in the end of this code...

if you want it multiple times, put it into a while loop in your bash script

As discussed in other Q&A, the only straightforward, non-deprecated way to open multiple tabs is to issue the command multiple times, such as the answer at Unix & LInux to the question, Opening new gnome-terminal (v3.28+) with multiple tabs and different commands, by Владимир Савостин.

If I want to extract a longer expression from each command, it seems I had to create a script and call that, which I did in place of using ; bash to keep the window open. I used a simple run_cmd.sh:

I then replaced bash -c with run_cmd.sh. Since that script is trivial, please consider it as in the public domain.

4
How to open several Terminal Tabs and open files in Vim and change directory?