Our stereo installation supports, according to the box, streaming over AirPlay (although the normal RAOP stuff doesn't seem to work on it. I think it's something called Airport Express), DLNA and Windows Media Sharing.

On Ubuntu, it seems almost impossible to get this thing to work, while on Windows it's possible with iTunes and Airfoil.

What I've tried, and what went wrong

Does anyone have any suggestions? Don't just close this as an "Exact duplicate", because if I haven't found an answer after looking for half a year, I think it's safe to assume that the answer is not yet on this website.

To my observation the main reason why it seems complicated to achieve media streaming to any external hardware media devices is that the manufacturers of these devices lean back and rely on the presence of OS X or Windows on their customer's machines.

From the many solutions that do exist I had success with the following solutions for DLNA media access for my Internet Radio, Android Devices, and Smart TV:

My favourite on that list definitely is minidlna, which now runs here 7/24 for several months with no issues. By default minidlna will run on startup as a service. To run it in user space you may use stream2ip from version > 1.0, or the MiniDLNA Application Indicator I made for this. You will still have to set up minidlna by its configuration file first.

Sadly none of these solutions are able to stream the output of my soundcard live to the receiver. Newer devices do not support the old RAOP protocol used by pulseaudio but seem to need the newer RAOP2 protocol which is not (yet?) available for Ubuntu.

Live streams to external (non-Ubuntu) devices is possible in case they support the RTP protocol pulseaudio is able to stream with, but I have not found one which does.

Another possibility is setting up an Iceast Internet Radio Server to generate our own private radio "station" in our local network. This works great but a prererequisite is that the tuner is able to connect to a stream defined by its IP-adress, and port. It should be an easy thing to do, but sadly most devices do not offer this. Instead they support Internet Radio directory services (e.g. vTuner, or tunein) which may dependent on the device not support custom radio streams to be added. From me only my radio device which operates through Reciva has no issues playing custom streams generated from Icecast (both via stream2ip, or from command line).

Last time I contacted Marantz (August 2012) they gave me the following information regarding support for a custom radio station:

"It is not possible to enter a custom radio station to your favorites. You can only select a station from the list provided by vTuner. From there you will have a choice of more than 17.000 stations." Translated from German

We may try if adding a custom URL in a personalized instance of a radio station service (see this blog for Denon) will work by now. For Marantz we can access the vTuner service on http://radiomarantz.com/. To personalize the service we need to register with the device's unique access code (likely to be the MAC). We then may be able to add the local URL of our Icecast radio stream (<IP>:<Port>/stream.mp3) as a custom radio station. Unfortunately due to lack of hardware we can't test this here.

Take a look at github.com/masmu/pulseaudio-dlna.

It was designed to stream the sound of your applications to DLNA devices in your network. You can choose which application to play on your device via pavucontrol. 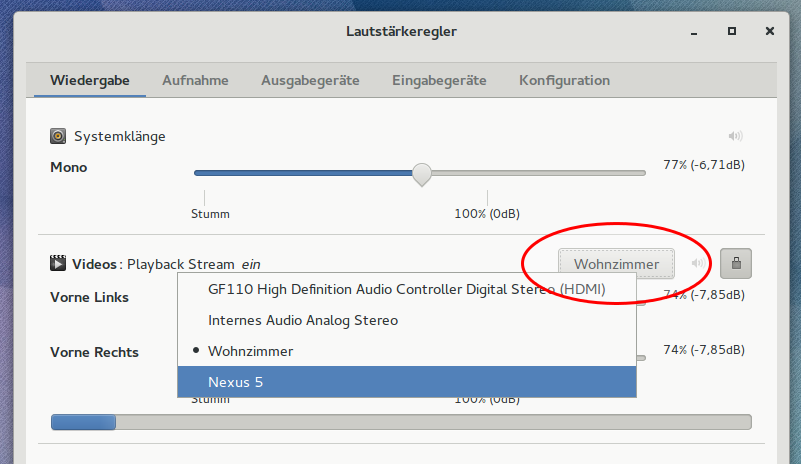 Takkat's hint for Marantz ("...To personalize the service we need to register with the device's unique...") helped me set this up successfully with the M-CR603 and I hope my update is useful though this thread (and the M-CR603) are quite old. The access code on radiomarantz.com is the device MAC. Via the Software Center I set up darkice and icecast2 on my Thinkpad W520 running Ubuntu 14.04 64-bit, using one of the many guides available in the public domain. On radiomarantz.com I added the local URL of the resulting Icecast radio stream (http://192.168.xx.yy:8000/stream.mp3) as a custom radio station. It worked with almost no glitches.

Not the answer you're looking for? Browse other questions tagged networking pulseaudio streaming mediaserver dlna or ask your own question.

725
What Application Indicators are available?
58
How do I set up live audio streams to a DLNA compliant device?
68
How do I setup an Icecast server for broadcasting audio in my network?

22
How to use android 2.1 phone as remote audio receiver?
3
Ubuntu 13.04 RAOP to Airport Express 2nd Generation doesn't work, how do I debug and get it working?
1
Stream Ubuntu audio to remote XMBC
10
Setting the default ALSA device for Pulseaudio
13
Airplay sink no longer visible in pulseaudio
5
Airplay from Ubuntu 14.10 to Speakers
0
Use MythBuntu As A Streaming Server
0
How play music with Ubuntu 18.04 using Airplay?
7
Replacement for pulseaudio-dlna on Ubuntu 20.04 to stream music through DLNA