Am I using the Nouveau driver or the proprietary NVIDIA driver?

For a long time, I have used the NVIDIA proprietary driver. In Additional Drivers the NVIDIA driver was activated. However, I just "Removed" that driver because I would like to use the Nouveau driver for other reasons. Yet, I have reason to believe I am still using the NVIDIA driver as the output of modprobe -l is as follows:

How do I really determine what driver I am using, and how to I enable Nouveau?

nvidiafb is a framebuffer driver inside the Linux Kernel. Is not the proprietary module from nvidia. (nvidia.ko).

If you want to see the short description of the module, issue the following command in terminal

If you want to read more a about framebuffer , read the FrambeBuffer on Ubuntu Wiki.

If nvidia restricted module was loaded , then the nouveau module Cannot be loaded too (conflict each other).

Nvidia's (restricted) module name is nvidia . Not nvidiafb or something similar.

Also you can search from Additional Drivers page . In example below , no proprietary drivers are in use 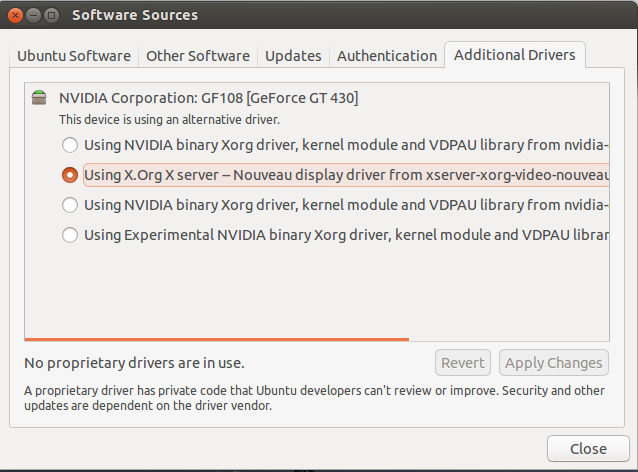 And another command that can show you, which driver is in use:

If it's nvidia , then you have nvidia driver installed and in use. If it's nouveau, then you don't.

You can use excellent inxi tool. Install it from repository :

Then do a query by :

At the third line You can see string NVIDIA 390.25 which means that I am using Nvidia Binary driver.

This is an old question but here is a reliable answer that you can count on in case someone else is looking for the same answer.

If you want to get more details, run:

Here is a sample output:

You may need to either reboot or restart X first. You can then try :

On any linux system with the NVIDIA driver installed and loaded into the kernel, you can execute:

Not the answer you're looking for? Browse other questions tagged drivers nvidia xorg nouveau or ask your own question.

10
Is Ubuntu recognizing and/or using my NVIDIA graphics card?
0
Ubuntu 16.04 is not detecting monitor connected via HDMI cable
0
what graphics drivers are now in use on this NVIDIA card?