I have installed LAMP on Ubuntu 12.10, and I want to access PhpMyAdmin, but I don't know it's URL.

But I got this problem :

The requested URL /phpmyadmin was not found on this server.

And these are the instructions I followed to install lamp:

Just in case someone doesn't know this (i didn't for sometime), after running this command to reconfigure phpmyadmin

this screen will appear in your terminal, make sure the * is there inside the brackets [] like this [*] for apache using the Space 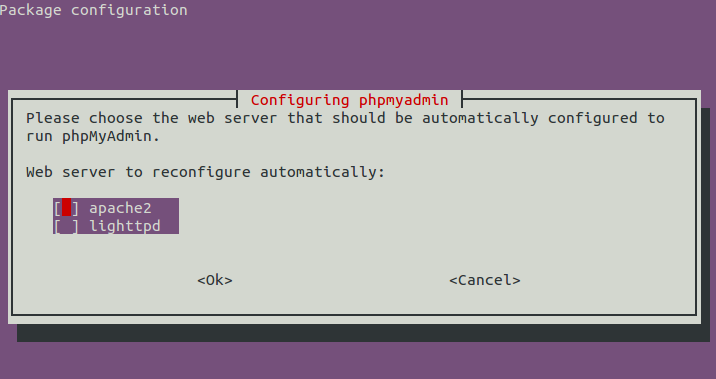 Assuming you followed those installation instructions to the letter, phpmyadmin should at least be installed on your computer. However, Apache configuration needs to be added for it to work.

When you installed phpmyadmin, it should have automatically set up its configuration for Apache, making it accessible at http://localhost/phpmyadmin/ (it's possible you may need the trailing slash?).

However, in case it didn't, you can re-run the initial configuration step with the following command:

(Some changes require restart instead of reload).

If you are sure that you do have lamp-stack just open up your terminal and type:

and paste the following at the end of file:

Then make sure you restart the server:

After installing phpMyAdmin you need to configure it. There is great documentation here: phpMyAdmin @ Community Ubuntu Documentation

204
How to remove symbolic link
1
How do I access phpMyAdmin?
0
cant access phpmyadmin after wordpress installation (LAMP stack)

72
phpmyadmin is not working after I installed it
0
why phpmyadmin didn't work?
0
Forbidden to access PhpMyAdmin in VPS of Ubuntu,Apache and Mysql
42
The requested URL /phpmyadmin was not found on this server
0
Phpmyadmin error HTTP 500 after fresh install
0
replace this file (located at /var/www/html/index.html) in Apache2 installed through LAMP in ubuntu 18.04