My system default is Nautilus. But when I right-click in Downloads and choose "open containing folder", it opens Thunar and not Nautilus. 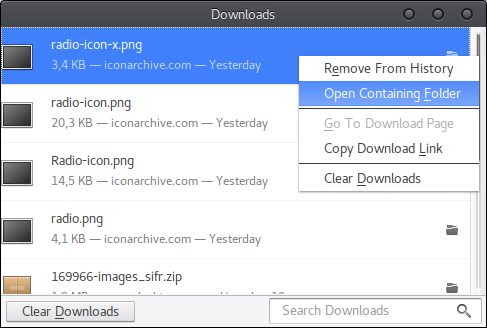 How can I change that?

After a lot of tries, I came upon the very simple method given above by Gill Bates, which was to

So I did that, then closed and reopened Firefox and sure enough, it worked like a charm. Maybe I can invoke Occam's Razor here...

The suggestion by @carnendil is not wise because the system generates this list at startup and it therefore should not be directly edited by the user. In fact, each entry is supposed to contain all the options available on the system and sometimes the first entry is not the preferred one.

In theory, the suggestion by @Fab should work, but it turns out that sometimes programs attempt to reference defaults.list exclusively. For example, the discussion on Bugzilla reveals that Firefox doesn't even know to look for either of the user's local lists, defaults.list and mimeapps.list.

Therefore, I suggest you edit one of the following files, with the first option probably being the wisest choice unless you are on a multiuser system:

I also encountered such problem, but in my case - just switching default File Manager to something and back to needed one, using standard gui, was helpful.

If the already mentioned solutions don't work, try this.

Write the following to /usr/share/dbus-1/services/org.freedesktop.FileManager1.service:

Change the Exec line to your liking. (Default nautilus.)

There is an old bug that points to some setting in the file /usr/share/applications/mimeinfo.cache.

The line that starts with inode/directory= in my system looks like this:

I guess yours points to Thunar instead.

To make the change, you need to edit mimeinfo.cache with:

I had the same issue as you guys but none of the answers really worked for me.

I had downloaded Konqueror (so that I can listen to Spotify independently of Firefox) and it had installed Dolphin as a prerequisite. Firefox started opening files in Dolphin after that.

As I do not use Dolphin for anything and Konqueror is only being used for Spotify, I decided to do away with Dolphin. Every distro has some kind of option to uninstall packages while leaving the packages that depend on them alone.

In arch it was:

I don't use Ubuntu but since this channel is called askubuntu, I did a bit of research for the Ubuntu equivalent:

(based on this thread)

For Thunar it should be:

Obviously this won't apply to everyone. It's a judgment call, you have to be sure that the extra filebrowser you're removing is not essential to something that will break without it. As long you're certain no system apps need it, you can always uninstall it and see if things are stable and just re-install it if they are not.

Solution for those running an XFCE environment, based on the other answers:

had the same problem (Kubuntu 14.04, download-folder are opened with audacious). Ultimative solution explained here: https://mtekk.us/archives/guides/make-firefox-use-dolphin-for-open-containing-folder/ In my case: I had to remove audacious and gwenview from the list and it worked (opens with my default file-manager dolphin)

The solution presented in other answers here and here involving refreshing the setting for file manager also works, but you need the GUI setting for that, and it also may be temporary, as the culprit may take over after programs installations or updates (see link below).

This is a problem that also appeared for me in more recent Ubuntu versions and ubuntu-based systems, and also in other Linux systems like Manjaro. It also appears in the same way in other browsers like Chrome and even other programs (like uGet, a downloader that also has the option "open containing folder"). The problem may appear also in more severe forms, where the default file manager is not replaced by other file manager, but by a different program (text editor, multimedia player).

The problem is, as indicated here, triggered only by the certain programs.

The best solution is to create or edit ~/.local/share/applications/mimeapps.list: edit the line that starts with inode/directory= and add the name of the file manager that you use if it is not there already; if that is already there but another program is listed there first, put the file manager first (if you need the other program(s) to open folders).

If the desktop environment is not freedesktop complient, like my Manjaro Cinnamon, the file to be created/edited should be ~/.local/share/applications/mimeinfo.cache like so:

I found a solution which works for Firefox, Thunderbird and even for XNview.

First open a console window as non-root. Then past the following command:

This will output the current default browser. In my case it confirmed, that every application which is no part of TDE, uses Thunar. The next step is to determine the browser which you prefer:

kfmclient_dir.desktop has to be replaced by the name of the filemanager you wish. If you don't know the exact name, open the "file allocations"-window in the settings of your desktop environment.

If more than one desktop environment is installed, I strongly recommend to change this only per user.