Does anybody know how I can set Alt+Shift to change the keyboard layout on both sides? I use ubuntu 12.04.

keyboard keyboard-layout
Share
Improve this question
edited May 2, 2013 at 16:00

Credits are due to reverendj1, who described a way of assigning a Custom key to toggle keyboard layout, using setxkbmap, which featured in the workaround alluded to in Edit 2 of my previous answer...

Here is the slightly more involved way, but will give you more flexibility for the key combination. First, copy and paste this script I wrote and name it something like kb_toggle.sh. Make sure to edit LANG1 and LANG2 to be the keyboard layout codes you need.

make the file by right-clicking on it -> "Properties" -> "Permissions" tab, then select "Allow executing file as program.

Now, open "System Settings" -> "Keyboard" -> "Shortcuts" tab and select "Custom Shortcuts". Click the + button on the bottom and name the shortcut "Keyboard Toggle" or whatever you want, really. Then give the full path to the script you made earlier in the command box. Hit Apply. Click where it says "Disabled" then you can set the shortcut to whatever you want by clicking your key combination!

You may even get away with a one-liner, if you prefer:

Now you can switch by pressing alt+shift

Depending on how you decide to achieve your goal, you may want to include lv3:ralt_alt in your command, resulting in

The "right Alt key" is often (always ?) not the same as the "left Alt key", but corresponds to the AltGr, see for instance

and as such has a different-and-distinct function.

You may want to try to try using xdotool to emulate certain key combination behaviour. Thus, you could set the

For a detailed example of how this can be done in general, with screenshots, plz refer to izx's excellent answer here. Regarding your questions specifically, you could try

and then assigning this command to the Shift+Level3 Shift (don't type this, just press right_Shift + right_AltGr) shortcut in Custom Shortcuts. Again, plz refer to the relevant part of izx's answer.

(or alternatively, but less likely to work, Alt_R+Shift_R), noting that AltGr is "equivalent to" ISO_Level3_Shift,

you'd probaly get stuck, because "Alt_R+Shift_R" does not seem to be offered in the standard layout switching key dialog.

Generally, any valid X Keysym string will work. Multiple keys are separated by '+'. Aliases exist for "alt", "ctrl", "shift", "super", and "meta" which all map to Foo_L, such as Alt_L and Control_L, etc.

also Remapping the AltGr key to Control with setxkbmap may be of interest to you...

See https://bugs.launchpad.net/ubuntu/+source/xdotool/+bug/696247 and http://code.google.com/p/semicomplete/issues/detail?id=13 ... and the workaround suggested therein (and confirmed to be working as of Nov 2012) of "The workaround, for now, is to use setxkbmap to force your keymap in xmodmap (setxkbmap dvorak, etc)". Thusly, plz refer to my 2nd, separate answer.

You can use Alt-Shift for both languages 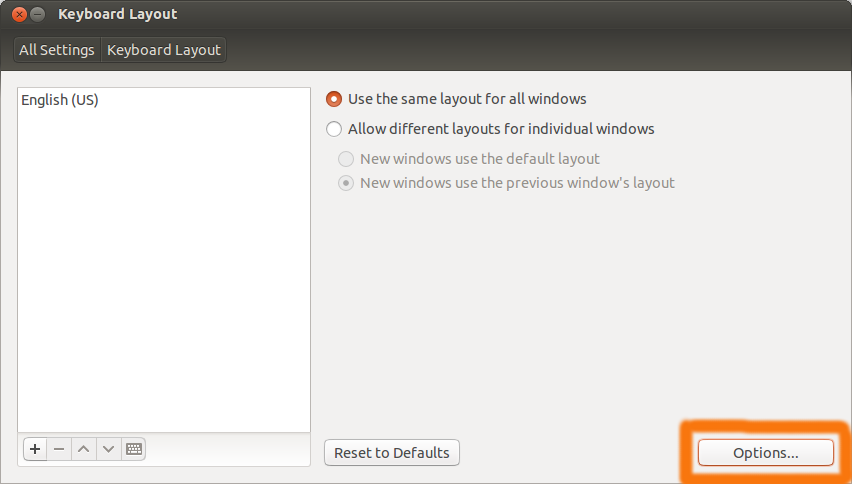 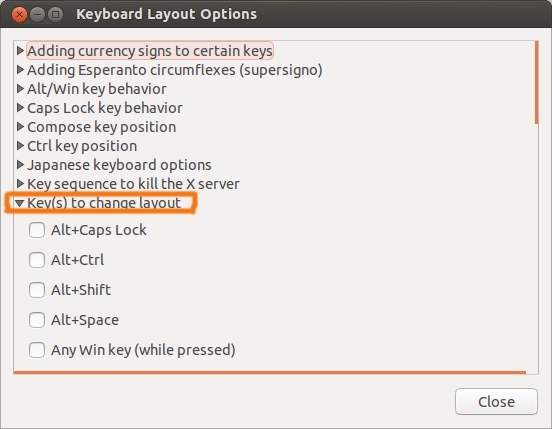 Simply add this command as a startup application:

This should enable both Alt-Shift toggles. However, you will lose the compositing functionality of the right Alt key (e.g.: you won't be able to draw a Euro sign (€) by hitting RightAlt+E).

You could test the command out in a terminal first before adding it to your autostart applications.

go to keyboard layouts from dash, and then click options, there's an option key(s) to change layout check alt+shift. This works for me, both alt and shift works even right alt+ left shift works :)

Persian and some other layouts are hardcoded to have ISO_Level3_Switch(AltGr or whatever!) instead of Right Alt so when you are in english layout you can use Alt_R + Shift_R/Shift_R + Alt_R to switch to persian but when you are using persian layout the key isn't Alt_R anymore but ISO_Level3_Switch!

Not the answer you're looking for? Browse other questions tagged keyboard keyboard-layout or ask your own question.

411
How do I start applications automatically on login?
7
[Left Alt]+Tab doesn't work or How to change a Level3 Shift to a normal ALT?
6
How to have two sets of shortcut keys for Compiz grid commands "Put Left" and "Put Right"?
6
How to make Caps Lock change keyboard layout without delay?
4
Custom key to toggle keyboard layout
3
Remapping the AltGr key to Control with setxkbmap