The usual cause of the "missing partitions" problem is one of two things:

It might be there, just not showing up yet in Nautilus. Try mounting the drive.

When installing Ubuntu, choose the Something Else option. (on the bottom of the screenshot below) 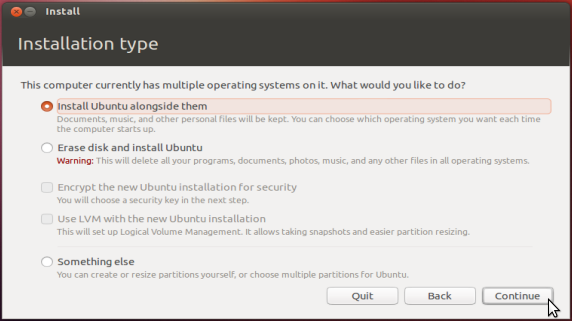 This will show your Windows partitions, and allow you to install Ubuntu on other partitions. See https://help.ubuntu.com/community/GraphicalInstall#Installation_type

You say: "when I am going to install Ubuntu it doesn't recognize my windows". This suggests to me that your problem is similar to the one described, for example, in this question: Dual boot ubuntu 12.10 and windows 8 Dell Inspiron 15 r

If so, the answers to that question may be helpful.

I had the same problem with my laptop that originally have Windows 8 (using GPT) that I installed Windows 7 (using MBR) on. I found the solution here...

After so much time messing around with Windows, Ubuntu feels great!

Not the answer you're looking for? Browse other questions tagged 12.04 installation partitioning windows-7 or ask your own question.

1
Monitor turns off while installing 12.04
3
Why can't 12.04 installer see one of my hard drives
5
I can't install Ubuntu 12.04 on my PC
1
Installer doesn't recognize kingston SSDnow sv 200 90g
4
Accessing Ubuntu Partition from Windows 7
0
Reinstalling Ubuntu 12.04 on a dual booted system with swap file