How do I connect to my Bluetooth headset?

I have an ACER C7 Chromebook with Ubuntu 12.04 installed. Also I have two apps installed Bluetooth Manager and Bluetooth.

I am trying to connect an MEElectronics AF9-BK Air-Fi Stereo Bluetooth Wireless Headset with Microphone to Ubuntu. I have tried to set up the new device and pair, but the headset is never recognized.

I checked hard and soft setting for Bluetooth and they are on.

I am new to Ubuntu 12.04 and Linux and need specific instructions.

In case we had used the headset on a different device, or when pairing failed we may have to repeat the pairing procedure. Before we can do so we may have to remove the device first (this is done in step 2. above by pressing -).

For those using Ubuntu Studio:

I was wrestling with bluetooth headsets off and on for years, with very limited success. I was able to get bluez/blueman working, pair the device, and even transfer audio using a command line program with a manually-entered device name. That did me no good, though. Only one application was able to find and use my headset (ALSA's discovery API doesn't seem to work with BT headsets) and even that app now fails in its most recent version. I have read that PulseAudio makes bluetooth headsets a bit easier, but since Pulse is not viable for me, the situation is still pretty bad.

It pairs with a bluetooth headset, but presents itself to the computer as a USB sound device instead of a bluetooth adapter. Every application I have is able to discover and use it because it doesn't require any bluetooth support in the operating system. It completely solved my problem.

Jabra is the only company that I'm certain makes such a thing. They also made one or two earlier models that can be found for less money. I chose the new one mainly because it's so tiny. I have heard that Creative makes something similar; perhaps their BT-D1 or BT-W2. If someone knows of others, please post links.

Now it works for me more or less out of the box for any version 16.04 or above.

When you're connecting or pairing make sure you select Audio Sink then connect your device.

Wait for some time and you’ll see that Ubuntu has recognized your Bluetooth speakers as headsets. 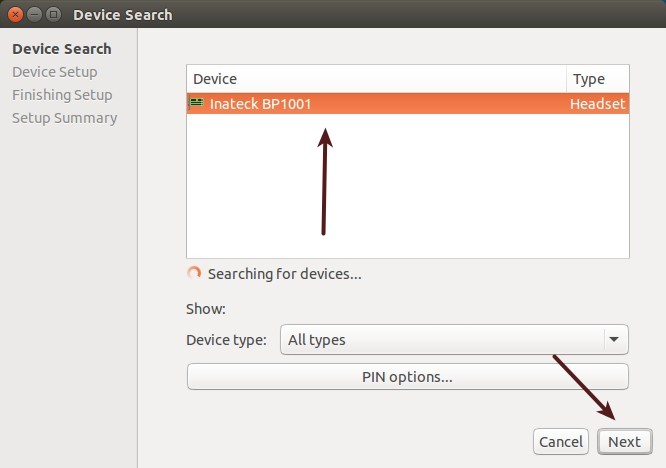 Once found, Ubuntu will try to setup the device. Have patience. Just wait for a few minutes. If the device setup fails or it asks for a password, try to restart both Ubuntu and speakers, it did work for me. Check also that you don't have another active bluetooth device nearby that interferes with your connection.

Then if the connection succeeds go to the Sound Settings on the top panel menu and enable your bluetooth device.

In Ubuntu 18.04 Gnome there is something slightly different. I needed to do in shorten this (RIVAARENA):

In ubuntu 18.04 it is possible to pair and use RIAARENA (in Home or Away switch). Pairing is done/undone by the left part of cradle button ((.)) on the device. Than it is better and sometimes needed to install pulse audio to pair device with player programme - e.q. VLC, Firefox stream, Rhytmbox etc. Pulse Audio -> Configuration. Setup Analog Stereo Duplex, Check if RIVAARENA is on the list. 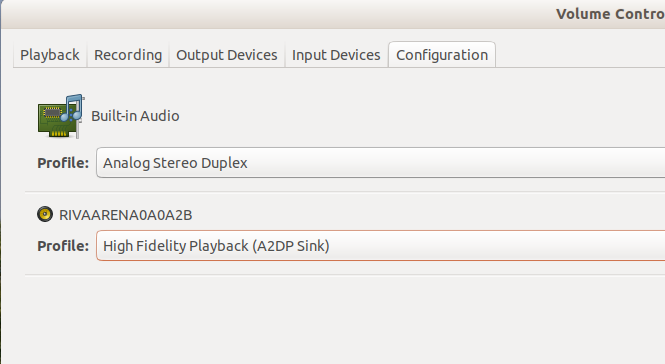 Go to -> Playback Tab. There are all runnig playback applications.

Push button on the left to choose RIVAARENA output for the proper app.

Mostly there is delay between sound and video stream. Go to -> Output devices tab to setup proper latency offset (in my case it is maximum 2000ms still little late!).

Documentation which helped me very well:

Intel Q/A https://communities.intel.com/thread/62848. There is very detailed written what to do.

From: PulseAudio can not load bluetooth module

Or in my case I had to not use sudo!

This is the quick option, you can see the "correct" option if you follow the link.

I had this problem. First uninstall then reinstall related packages:

Pair the device, then run

and configure your Bluetooth device to use whatever mode will work. a2dp worked for me.

RoachRoach
11
Add a comment  |
Highly active question. Earn 10 reputation (not counting the association bonus) in order to answer this question. The reputation requirement helps protect this question from spam and non-answer activity.

Not the answer you're looking for? Browse other questions tagged bluetooth headset or ask your own question.