I was told that sudo apt-get install (package.deb) installs the software with all the dependencies too.

I am trying install Google Chrome, but when I do this step, it generates the following error:

Does anyone have a solution to this problem ?

You will want to run sudo dpkg -i packagename.deb instead of apt-get.

You can install .deb files with the Ubuntu Software Centre by double-clicking on one, or using dpkg -i packagename.deb command. See this question: How do I install a .deb file via the command line?

The beauty of using Ubuntu's repositories is that finding the package, downloading the package, and installing updates for the package is handled for you. For example, you only need to type the following command to install Chromium, you don't have to download anything in advance or anything else:

For a comparison of the different ways of obtaining and installing software in Ubuntu, see this question: Should I install programs from a source tarball (`.tar.gz`), from the Ubuntu Software Centre, or from elsewhere?

You need a ./ in front of the .deb filename (or the full path if it's not in the current directory):

I install Google Chrome by visiting dl.google.com with another browser and just following instructions.
The installation process automatically adds a ppa for subsequent updates. See the last entry in the image below: 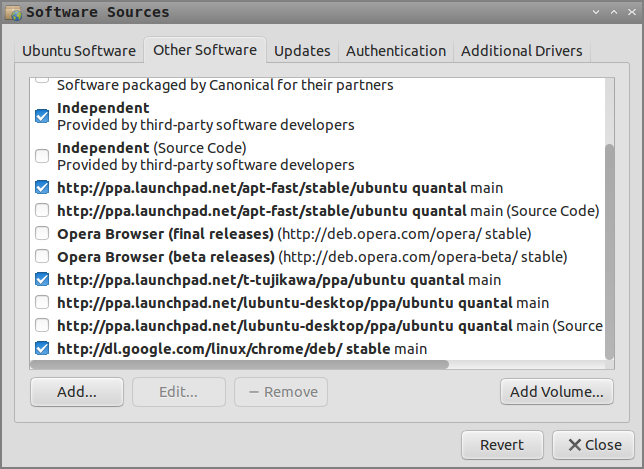 I use this to install google chrome on a remote server ... also works on your laptop

the initial dpkg -i command will fail if your machine lacks required upstream packages so after the --fix-broken cmd the 2nd install cmd works correctly ... output of last cmd verifies package got installed

All the other answers and comments should be helpful, but to be comprehensive:

Once you have downloaded the package from Google and run it to install, only then will you - potentially - be given an error message that you need to install dependencies.

You would then want to run

Which - I think - are the most common missing dependencies required by Chrome (in 12.04 that is- YMMV.) And then you can use, as mikewhatever notes, from the directory in which your Chrome installer is located, the command

Where that stuff in brackets should be what you downloaded from Google.

But you're only using sudo dpkg -i because you're already in the command line anyways. You could just go back and double-click or however you run the installer file from your GUI.

If that still doesn't work and you are still missing required dependencies,

tells ubuntu to try to fix broken packages, then you can run the sudo dpkg... command again.

[1] I would reiterate that while askubuntu is an extraordinary community resource, if what you really want is to put Google's proprietary, branded version of their software on your machine, and all that entails, your best bet is probably going to be going to Google for help. I mean they're not working as volunteers, you know?

here is a solution which is worked for me,

run the above command first and try to upgrade the packages

now you try installing chrome or anything as usual

Not the answer you're looking for? Browse other questions tagged apt package-management software-installation google-chrome or ask your own question.

1269
How do I install a .deb file via the command line?
29
Should I install programs from a source tarball (`.tar.gz`), from the Ubuntu Software Centre, or from elsewhere?